Home
Books
How Does When Marnie Was There Compare To Its Studio Ghibli Movie?
Books
·4 min read

How Does When Marnie Was There Compare To Its Studio Ghibli Movie?

Senses are scintillated in both this beloved novel and magical Ghibli film. 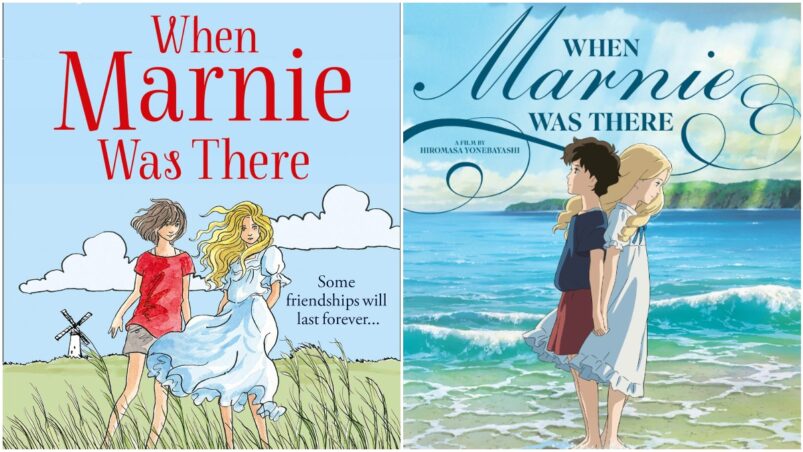 When Marnie Was There

“But the feeling of freedom had changed imperceptibly to one of loneliness. She knew that even if she had met them they would never have been friends. They were children who were ‘inside’ – anyone could see that.” – When Marnie Was There (Joan G. Robinson)

Loneliness can roll through the spirit like an ocean wave. First, there are crests. Grief builds inside your chest and reaches maximum capacity, rising until it fills the marrow of your bones with overwhelming helplessness. Then, there are troughs. Sorrow plunges your emotions downward. You descend back into the numb acceptance over the loneliness’ presence. And those times when someone may attempt to reach out toward you as they tread through the sand to meet you at the shore, loneliness can trigger defence mechanisms. Another person approaches you, but you recede back into the ocean’s solitude, apprehensive.

Written in 1967 by British author Joan G. Robinson, When Marnie Was There is a magical realist novel about tragedy, otherness, family, and loneliness. It’s a drama wrapped in a cloak stitched with fantasy and fabulism. The book centres on a young orphan girl and her desire for connections. When Marnie Was There approaches the subject of children with maturity, so it’s difficult to fit the book into a genre for a targeted audience. Ideally, both younger readers and adults could pick When Marnie Was There up from any section in a bookstore. The 1960s novel stands the test of time. Readers of any age will find themselves swept away by the mournful narrative about an emotionally detached child who becomes captivated by a mysterious girl living in a mansion by the sea.

If the plot sounds Ghibli-esque – a psychological drama centering on a lonely young girl protagonist, touched with a hint of surrealist magic – audiences should not be surprised that the novel received a film adaptation by that very studio. Ghibli director Hiromasa Yonebayashi adapted the source material into a theatrical movie in 2014. Interestingly, the Japanese title, Omoide no Mānī, subtly hints at the themes more so than the English title, literally translating to “Marnie of [My] Memories.” Although the changes When Marnie Was There (2014) made from Robinson’s text were minimal, the creators did a beautiful job creating an accessible, gorgeously-illustrated, and soundtrack-driven film in the audio-visual medium.

Both versions of When Marnie Was There initially captivate through their settings. In Robinson’s book, the story takes place in the seaside county of Norfolk, England. Robinson describes how protagonist Anna travels there after an asthma attack incapacitates the foster child. In Yonebayashi’s film, Anna’s foster mother sends the isolated girl to a visually similar Japanese town for the summer in hopes that the fresh air will help her lungs. This is the first major difference between the stories. Yet, both stories invite luminous detail into their setting depiction. Audiences can nearly smell the salt-laden air with Anna as she adventures along the coast.

When Marnie Was there uses setting as a sensual, significant character. Anna, after suffering the loss of her mother and then her grandmother before her adoption, finds the pearly water setting comforting in her loneliness. Robinson’s prose flows like undulating waves, drifting dreamily through sensory descriptions where seagulls caw overhead and lofty clouds merge into the pearl-gray sky. In Studio Ghibli fashion, When Marnie Was There (2014) also scintillates the senses with animation flowing like fluid water. Japanese clothing and storefronts touch the film with cultural significance.

Play the lilting flute and piano intensive soundtrack cascading through the Ghibli adaptation while reading the book, and the written details transport you straight to Norfolk. The novel feels a little darker, saturated with quiet, greyer hues, while the movie appears washed in sunshine and cerulean blues. Still, the same tonal sensibilities remain.

All her life, Anna has felt ordinary and lonely. Robinson provides a constant window inside Anna’s head, probing Anna’s anxious thoughts repeatedly throughout the novel. Anna pines for connections with other people. But her social anxiety, trauma over death and displacement, and depression prevent her from establishing relationships with anyone. The novel presents Anna’s internalised turmoil to a point where Anna tips from feeling relatable to nearly exhausting. However, loneliness, in its myriad forms and emotions that arise as a result, is exhausting. Escaping these feelings often remains untenable, and Robinson earnestly conveys how a little girl might grapple with these feelings.

While readers may find Anna’s internal dialogue repetitive, the Studio Ghibli film takes a less invasive approach to communicating Anna’s loneliness. The novel and the When Marnie Was There film reveals Anna’s thoughts. She relates her loneliness as a by product of her outsider status. Self-described as existing on the outside of the other children living inside a ‘magic circle’ of acceptance, Anna is shown looking forlornly at her fellow adolescents as she draws what she observes in the film. As the movie progresses, she returns to art when feeling particularly contemplative about the reality of the unique girl she meets in a towering mansion, Marnie.

Essentially, Yonebayashi’s adaptation offers Anna a pastime not present in the novel. Portraying Anna as an artist makes sense in terms of the potential to visually signify and foreshadow narrative codes. Additionally, sketching Marnie, in particular, makes the elusive girl tangible on the page. Giving Anna a hobby in the film functions as a thematically aesthetic complement to Anna’s text-based character.

Other changes the film enacted include changing a tertiary character’s identity, the mystery involving Marnie’s sporadic disappearances, and substituting one single child for the entire family Anna interacts with in the novel. To discuss these differences would mean giving away the surprise endings. Either way, the changes end up relatively insignificant in relation to the impactful conclusion. The way Robinson’s novel and the film portray suspense, freedom, loneliness, and the reality-blurring rendezvous between Anna and Marnie thrum with thoughtful narrative structures. The spirit of text lives on in nuanced moodiness through the film’s dedication to aestheticism.

When Marnie Was There tenderly expresses the germane interactions and self-discoveries Anna makes whilst seeking refuge from her isolated loneliness. Life is ephemeral; relationships allow you to weather storms as you run together, hand in hand, toward life’s swelling waves.

READ NEXT: 10 Anime Shows For People Who Don’t Watch Anime