Down with this sickness. 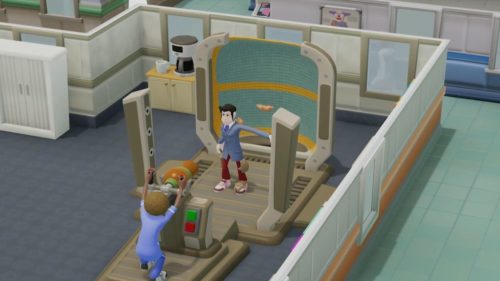 Acting as a spiritual successor to the highly popular sim Theme Hospital, Two Point Hospital is the first game to come out of British developer Two Point Studios. Many of the people who worked at Bullfrog Productions and had a hand in creating Theme Hospital are involved in this latest effort. This includes producer Mark Webley, lead designer Gary Carr, and musical composer Russell Shaw.

They have developed Two Point Hospital with the plan of releasing further simulator games in the future within the same shared universe. Now that it’s releasing on consoles after an initial PC launch in 2018, it’s a great opportunity to attract a whole new audience and firmly establish the franchise in the simulator genre. Thankfully, the developers grab the opportunity firmly with both hands. 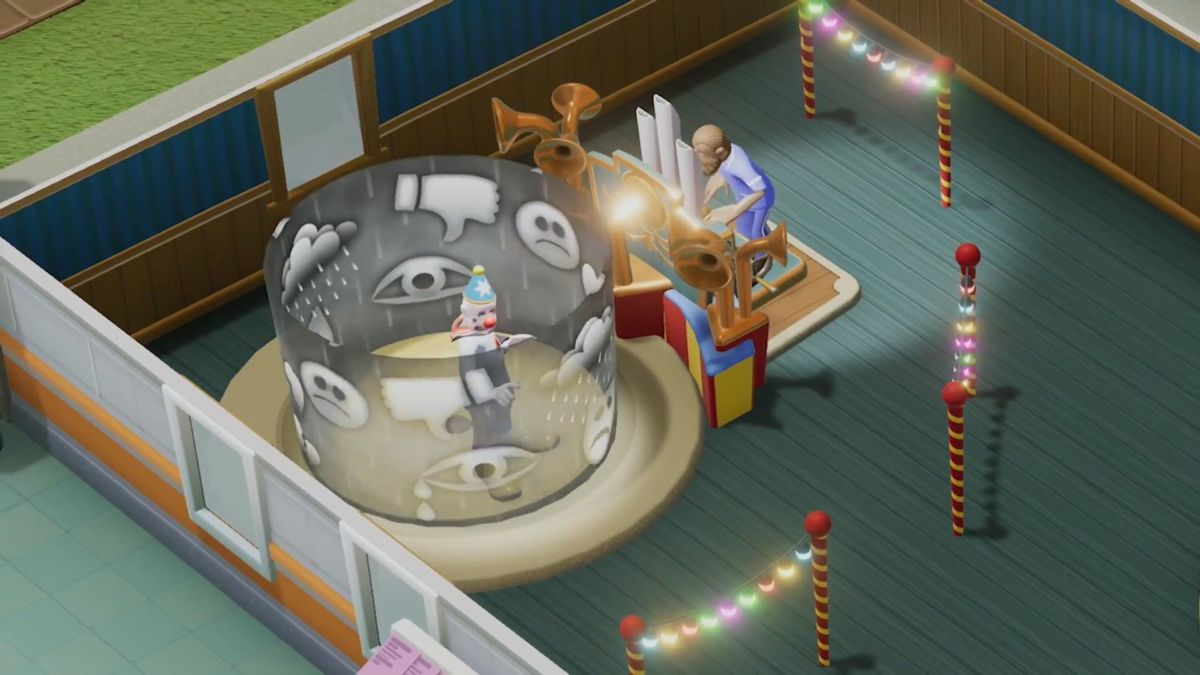 A hospital without any diseases to cure would be pretty useless. Big pharma is in luck in the world of Two Point Hospital though, because there are plenty of different afflictions that require all kinds of treatments. Just like in Theme Hospital, which had conditions such as Bloaty Head, this game features a variety of fictional diseases rather than using real-world examples. Most of them are a play on words and almost all of them are delightfully silly.

Most players will let out a chuckle the first time they see someone come in with lightheadedness and need the lightbulb on their head screwed off. Other illnesses include jest infection, mock star, and pandemic, where patients will be dressed as clowns, think they are Freddie Mercury, or have a pan stuck to their heads. In total, there are dozens of illnesses that you’ll have to contend with as diagnosing and treating them is the ultimate aim of the game. 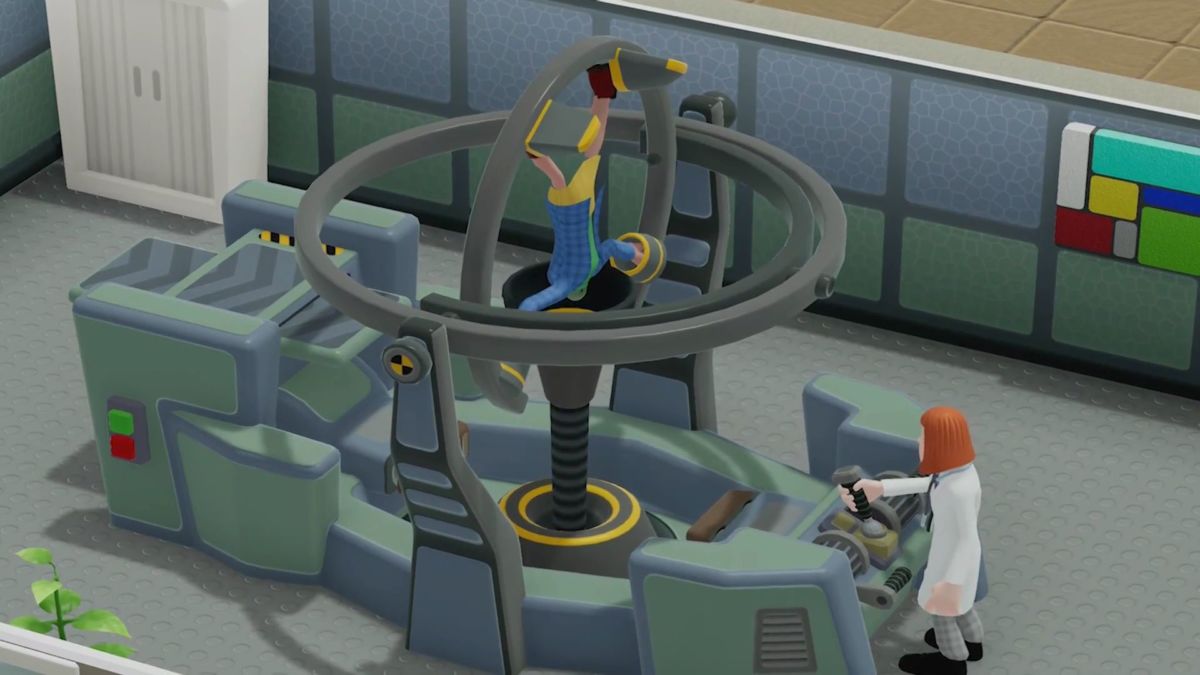 Impressively, the developers have managed to actually make Two Point Hospital funny. While it may not be on a level with the likes of The Secret of Monkey Island or Portal, there are still plenty of good gags. I’ve already spoken about the diseases and the silly puns that make up their names, yet this is not where the humor ends. There is also some great satire on health, medicine, and the modern world in general, with the hospital announcer in particular coming out with a slurry of funny lines.

In terms of gameplay, Two Point Studios follows pretty much the same concept as Theme Hospital. Players are given an empty building and are allowed to populate it with rooms and items as they see fit. There are some bare essentials that you always have to take into account but, for the most part, players are given free rein over how they want their hospitals to look and work. This sense of freedom is an important ingredient that many other simulators fail to grasp. In these types of games, players want the ability to take complete control of as many factors as they can and Two Point Hospital delivers on that front. 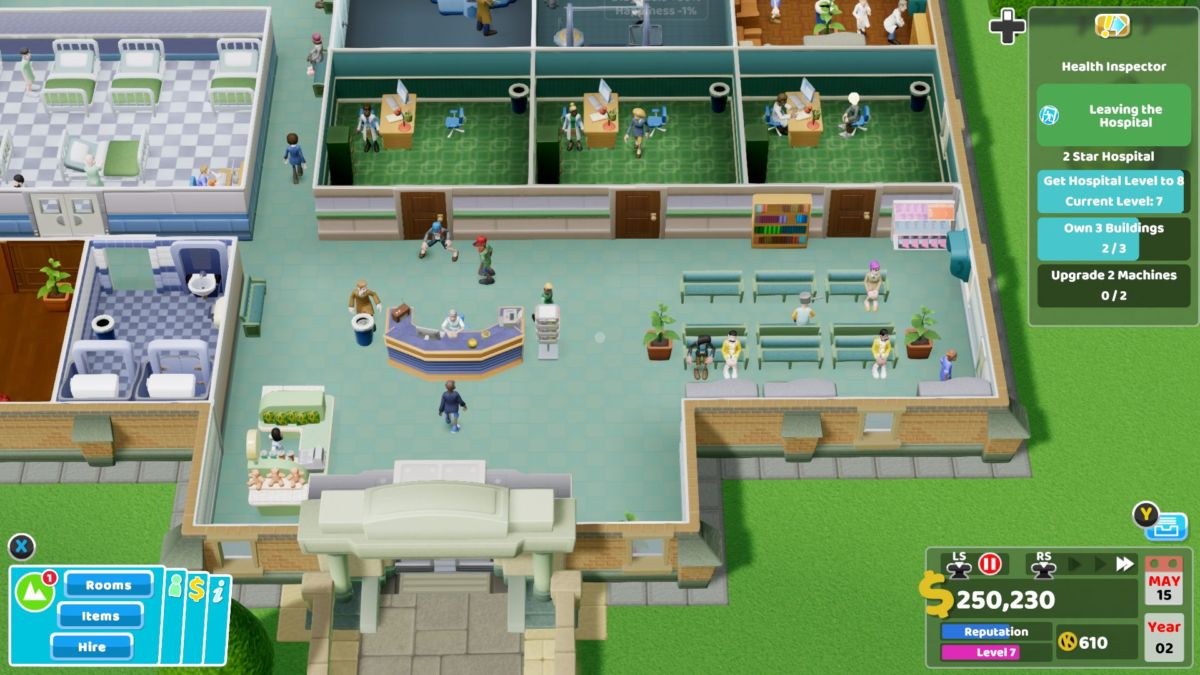 At its most basic level, you will be building rooms and stocking them with the necessary items so that they can function properly. GP Rooms need a desk and filing cabinet for example, although rooms can soon become much more complicated than that. However, the size of each room and its layout are completely up to you, as long as a minimum threshold is met. You can also add extra decorations or useful equipment into rooms to make your hospital look better or improve the experience for patients and staff alike.

The main challenge comes from juggling the different needs of everyone within the hospital. Keeping staff happy is essential and doing so often involves paying them a good wage, providing a satisfactory staff room, and generally making the hospital a nice place to work. Then you have to take into account the patients, where everything from the quality of your staff to the layout of the hospital comes into play. Have your treatment rooms too far away from the diagnostic departments and ill individuals could die before reaching them. Managing queues and providing entertainment and basic needs, such as toilets or food, is also important. 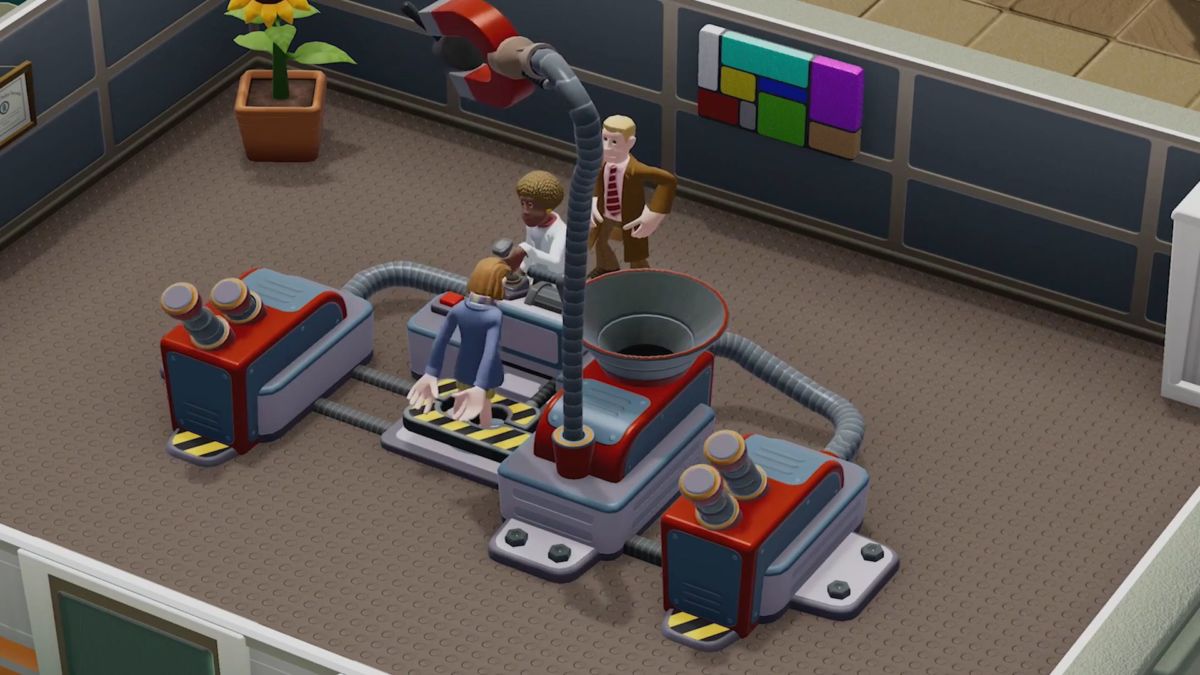 At first, you only have to worry about tackling a few different types of diseases, giving you enough breathing space to learn the basics and get a good understanding of how each aspect works. I particularly like the way that Two Point Hospital doesn’t force you into doing anything. There are missions to complete and you can advance to new hospitals by meeting the requirements to get star ratings. but it also gives you the opportunity to progress at your own pace. You can happily stay at any of your facilities for as long as you want, unlocking more research items and rooms. As such, you can genuinely get invested in each of your hospitals without feeling like you need to abandon them as soon as additional ones are unlocked.

Although you can comfortably leave some sim games to their own devices with just a limited amount of attention, there is enough going on in Two Point Hospital to require a lot of your concentration. Yet, the game is still not all that challenging as you can simply pause it and work on problems that come up without the pressure of any sort of time limit. While I have played a lot of simulators and strategy games in my time, I am by no means an expert in the genre. Without any additional difficulty options or a wider variety of random encounters to spice up the action, Two Point Hospital is disappointingly easy. As long as you keep a close eye on your hospital, you shouldn’t have too much trouble reaching the final mission and attaining three stars across the board. 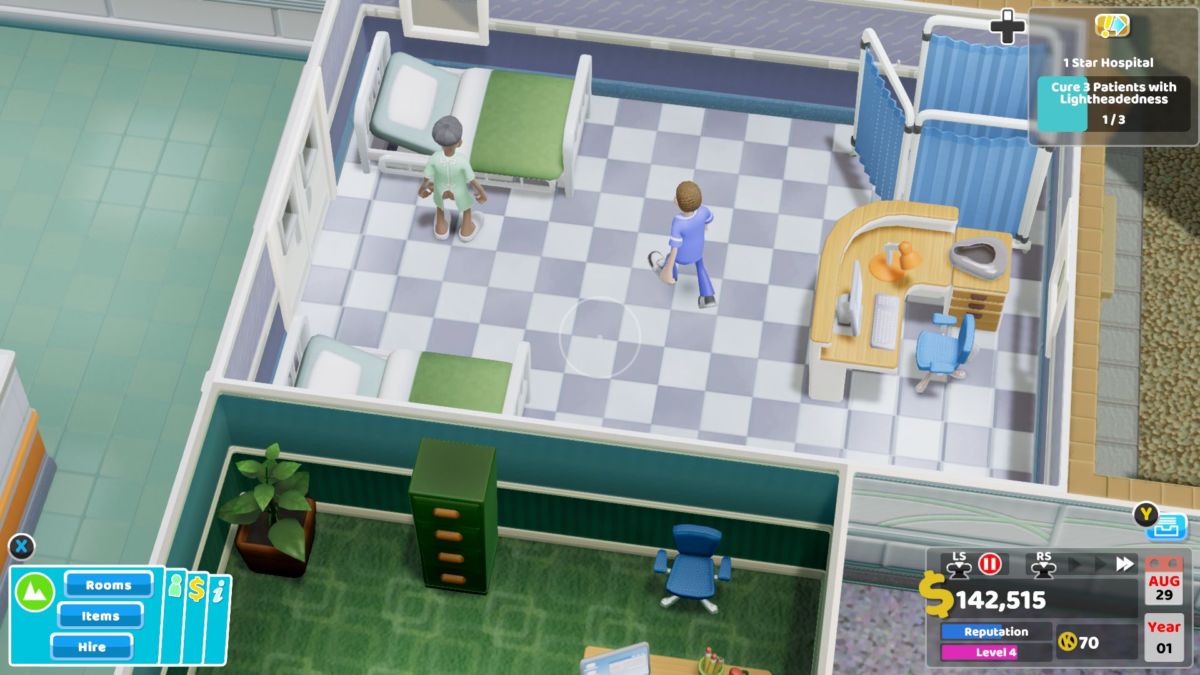 The developers deliberately chose to use a claymation-like art style, which looks similar to Wallace and Gromit, because they believed it would ensure the graphics would not become dated. To some extent, this is certainly true. By not relying so much on detailed or realistic models and environments, Two Point Hospital has an appeal that should last longer than traditional simulator games.

This art style also has other benefits, especially with the exaggerated movement the characters display which can show plenty of emotion on their faces and bodies. The main positive of this is that it’s easy to understand what patients and staff are feeling at any time without the need to zoom all the way in or click on them. You can get a good read just by the way they are acting and moving, something that probably wouldn’t have been possible if it was not for the claymation design.

Another big plus when it comes to the design is the user interface and the controls. The optimization to take Two Point Hospital from PC to the world of consoles makes playing it deceptively simple. This is largely down to the fact that the menus and overlays are all smartly designed so that they are clear and easy to understand. The only fiddly thing that sometimes caused issues was selecting an object or person when they were right next to something else you can click. A quick rotation of the camera fixes that problem, though, so it is hardly worth complaining about.

The controls themselves are incredibly easy to use, with almost every action in the game able to be performed with just one or two clicks. The shoulder buttons allow you to quickly cycle through menus and you can smoothly move around your facilities with ease, without any of the problems that can sometimes be associated with playing simulators with a controller. Ultimately, this feels like one of the best sim games on console thanks to just how easy it is to pick up and play.

Although there are a few flaws in Two Point Hospital, it remains a very entertaining game. There is something strangely cathartic about running the facilities you are trusted with. Once you understand the basics, you can quickly get into a rhythm that stays fun throughout the entire campaign. The gameplay is engaging and there is enough variety in terms of diseases and the needs of everyone inside the hospital to keep things interesting, even after 20 or so hours. Two Point Studios have brilliantly revitalized a classic experience that successfully surpasses Theme Hospital in practically every way.

A review copy of Two Point Hospital was provided by PR for the purposes of this review.

Verdict
Two Point Studios have created a brilliant simulator in Two Point Hospital that modernises the Theme Hospital experience while working beautifully on consoles.
8.5
Cultured Vultures is a pop culture website established in 2013 covering all things gaming, movies, and more. We eat your words.
All The News On The Biggest Games