EA are cocks, aren’t they? We’ve discussed them enough on Cultured Vultures over the years that I don’t feel the need to bang on about loot boxes, instead we’re going to talk about intellectual property. EA, like some kind of video games version of Smaug the Dragon, sits atop this pile of game franchises, only letting them out when they can make a quick buck off them. SimCity, Dungeon Keeper, Syndicate, Theme Park & Hospital, Wing Commander, Command and Conquer. The list goes on.

It’s surprising that EA hasn’t attempted to use these legendary game series better over the past few years, considering that spiritual successors like Cities Skylines, War for the Overworld and Satellite Reign have all done rather well for themselves. It’s these success stories which have fueled some of the original Theme Hospital team to open Two Point Studios and start up Two Point Hospital. 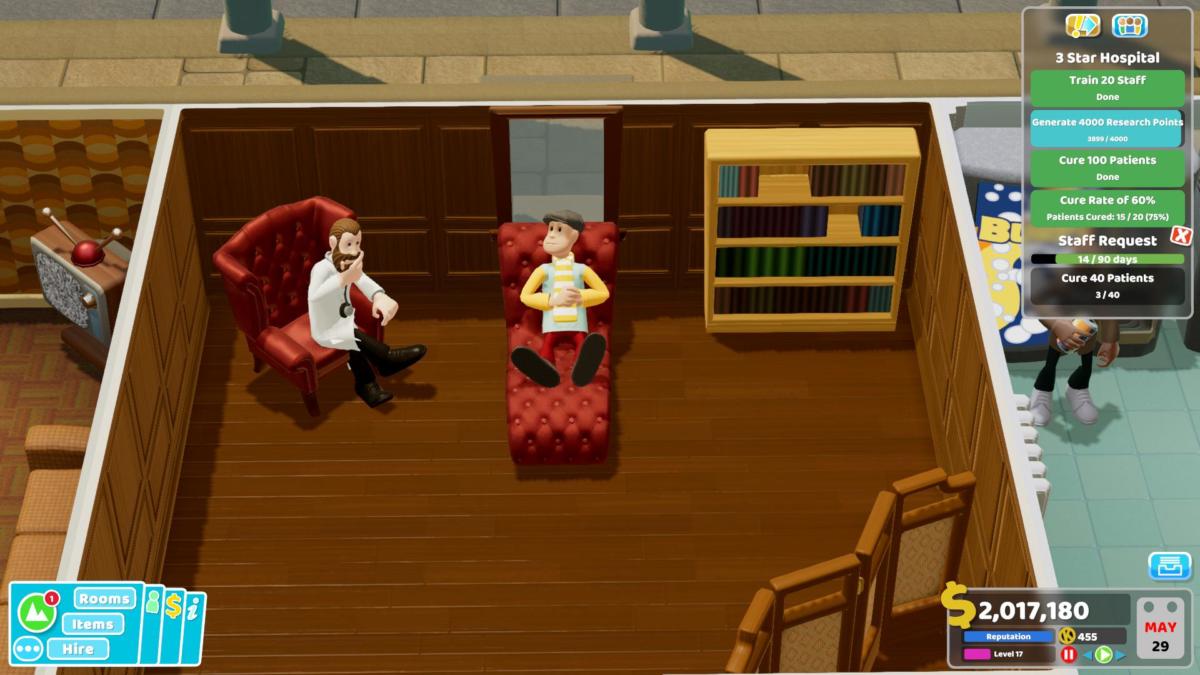 In 2018, we are being nostalgia milked like never before. Remember Ghostbusters? Then bank with Halifax. Remember He-Man? Then buy your insurance with moneysupermarket. It’s a clever, yet upsetting way to target a core audience by age. The 90s were a golden era for video games, and due to rising development costs leading to a lack of experimentation in AAA gaming, games have become less unique over time. It’s easy to feel nostalgic for ‘the good ol’ days’.

But Two Point Hospital isn’t a one note, cash grab notalgia thief at all. It’s bringing back a niche tycoon genre, in which we haven’t had a decent game in years. Hysteria Hospital and Hospital Tycoon have all fallen by the wayside and been forgotten (they were awful). Two Point Hospital’s main aim is to totally recreate the feel of Theme Hospital and, at the same time, modernise it and make it new. So how did they do? 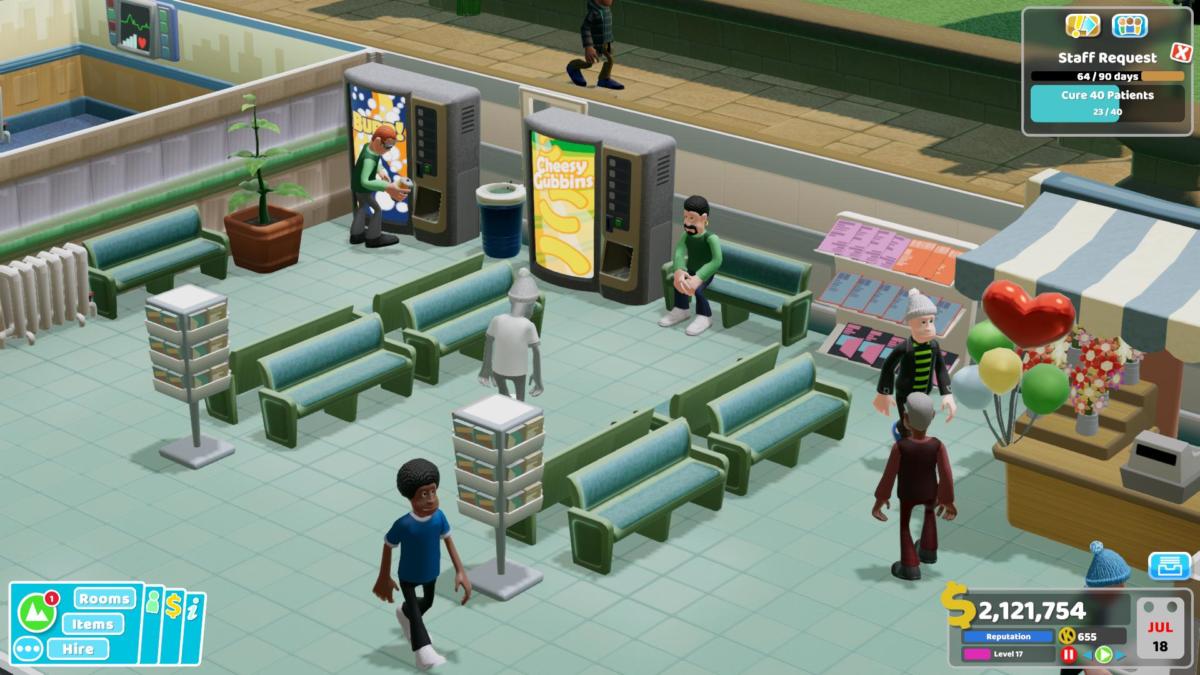 While the game is in now 3D, the building aspect is largely unchanged from its 2D counterpart. Rooms are limited to variations on squares based on a grid, the hospital levels are always squared off – no diagonal walls for us! While some more creative people may scoff at this, it’s the grid-based rigidity of the game that makes it so a joy to play. As much as I love Planet Coaster, it did away with much of Rollercoaster Coaster Tycoon’s grid-based gameplay, and while this allowed for more creative freedom and realistic looking parks, it didn’t make the game any more fun. 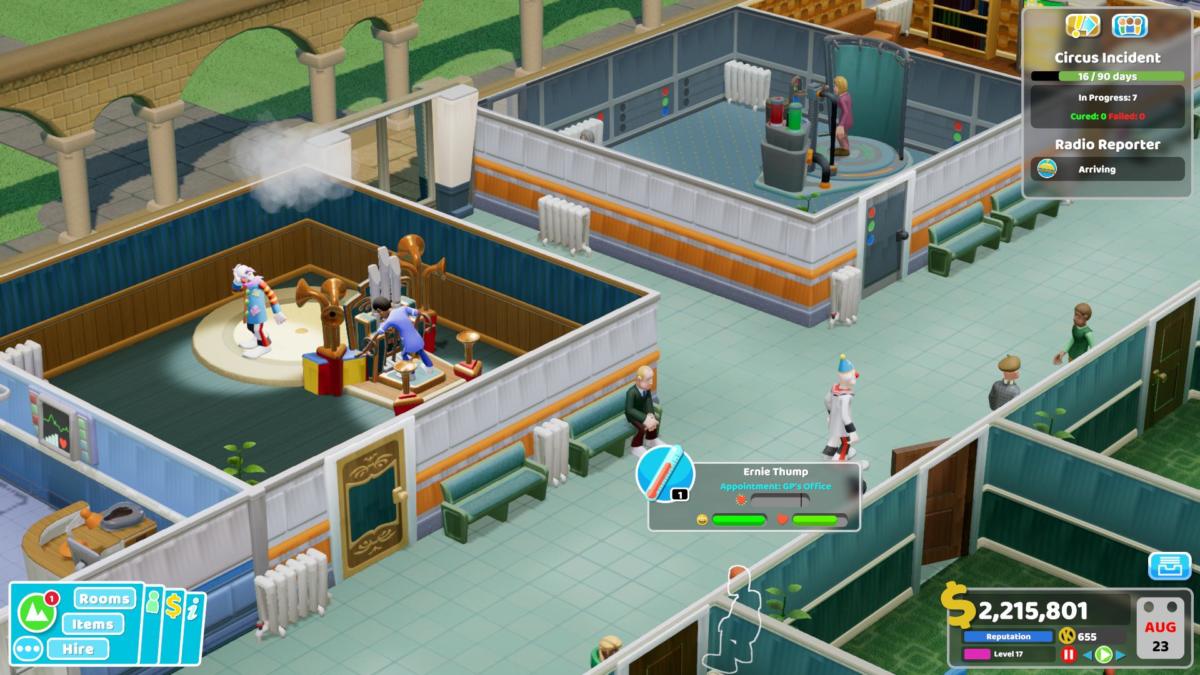 Within minutes I was into the game and building away, and while the rooms don’t allow for much space to move outside the grid based building, the rooms themselves offer a lot more freedom when it comes to placing items. Chairs, tables, bookcases and much more can be placed in multiple positions at multiple angles. Hiring staff is also very easy: click into the staff tab, find who you want to hire and click hire. Simple as. To begin with, you have only a small pool of applicants, but as your hospital grows so does that pool.

Moving around in three dimensions is easy. Like many similar games, WASD moves the camera around the map with R and F altering the angle. The mouse wheel handles zoom. The graphics are obviously inspired by Theme Hospital with a little Wallace & Gromit thrown in. Pleasant, cheerful tunes accompany you while you play, and there’s little noise aside from general hospital sounds, and of course, the fantastic receptionist over the address system. 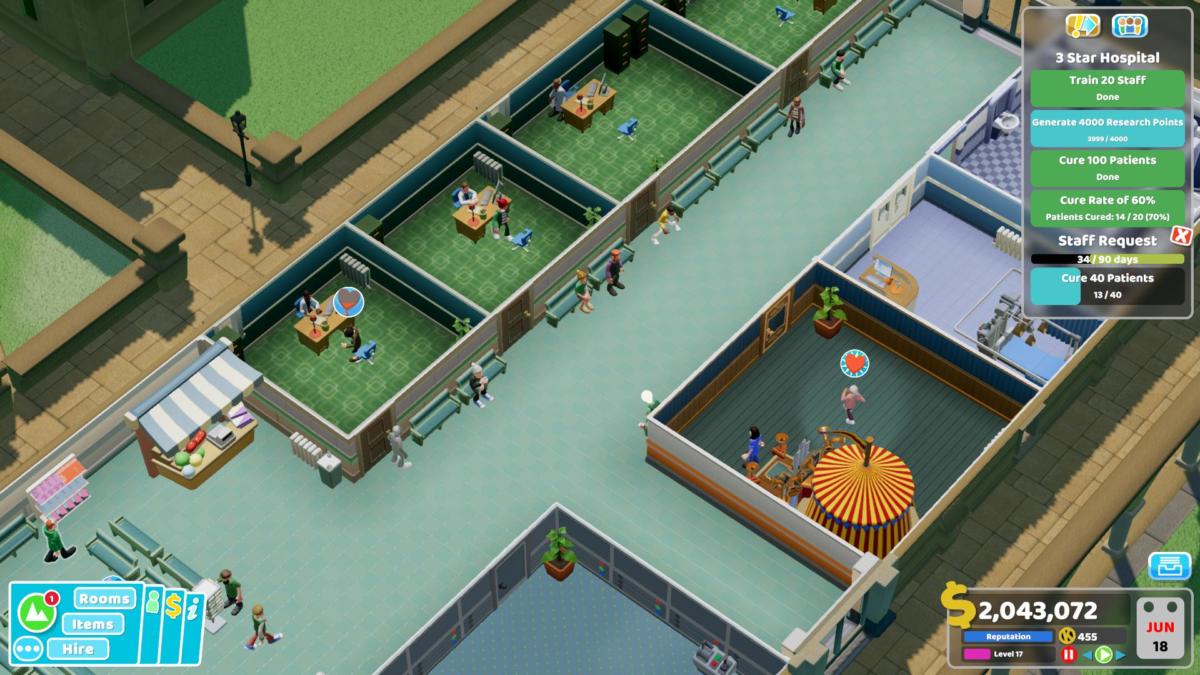 There are, of course, some changes here to ensure that Two Point does not end up in the sights of EA, so therefore the classic illnesses that featured in Theme Hospital have gone. They have been replaced by some nice alternatives such as Mock Star, 8-bitten and Pandemic, although they don’t hold a candle to Theme Hospital’s King Complex, Slack Tongue or TV Personalities.

As a fanatical Theme Hospital player, I found the tutorial character totally unnecessary — everything made perfect sense to me despite being updated. It should help new players, however the game is rather intuitive and very easy to pick up so it’s worth diving in feet first and playing around. The levels, while challenging, are beatable and it’s not a case of ‘if you build the wrong stuff you’ll fail’, like many other games. If you build things wrong, or in the wrong order, you can recover and win the level. Only once did I get into a situation where there was no way out but bankruptcy.

One downside is a downside that also plagues Theme Hospital. I’ll happily play a level to death, even after I’ve achieved everything that needs to be achieved and opened everything that can be opened. Both Theme and Two Point push you to attempt the next level once this current level has been done, which is fine, but after the targets have been reached there’s little to keep you on a particular level. Two Point Hospital does give you targets set by your doctors for you to reach, but it doesn’t add much after a level is complete.

Also missing from the game is a sandbox or freeplay mode, odd for a modern sim game to leave such a feature out. Two Point Studios have said that when features are opened on later levels it is possible to return to earlier hospitals and implement those features. But at the moment it seems that there is a vocal section of fans asking for a totally open, sandbox hospital for them to play doctor in. It is something I’d like to see, perhaps in an update.

Two Point Hospital is also very accessible for anyone trying this kind of game, or even genre, for the first time. Two Point’s levels get bigger, more complex and more expansive and they go on, but its difficulty curve is such that you won’t notice even yourself gittin’-gud.