TELEVISION REVIEW: The Walking Dead: ‘No Tomorrow Yet’ 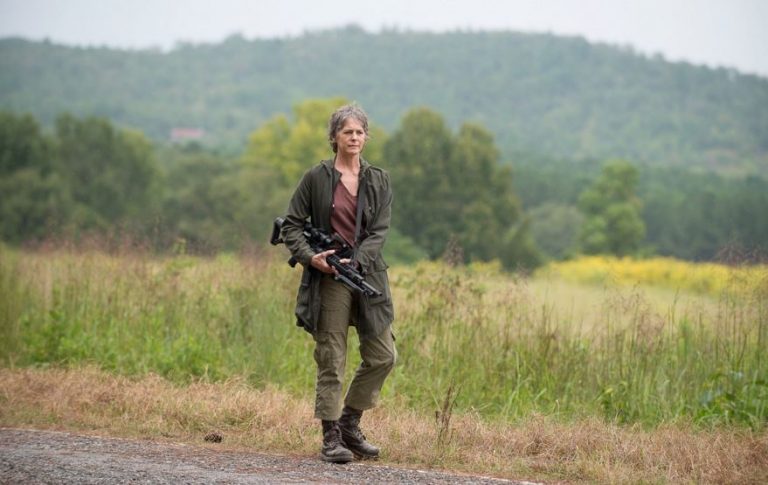 I honestly can’t tell you what I found more brutal in last night’s ferocious episode. Rick Grimes and the gang dispatching sleeping Saviors with knives through the eyes or Abraham’s abrupt break-up with Rosita. Though G.I. Ginger has been angling to hook-up with Sasha for a little while now, his choice of exit lines “when I first met you I thought you were the last woman on earth; you ain’t” is as callous as you get.

Almost as callous as the way Rick punched out a severed head several times in order to modify the head to look like Hilltop leader, Gregory, which is the crux of their plan in infiltrate Negan’s outpost.

Meanwhile we get a peek behind Carol’s callous exterior. We begin the episode with Carol gathering acorns, machete-slapping a googly eyed walker outta her way as she returns to Alexandria where she bakes some delicious beet and acorn cookies. With no reason to continue her matronly ruse, we see that this may be her default setting. We see her drop a cookie at the grave of her dead homey, Sam Anderson, and later, having tired of Daryl’s asexuality, she plays kissy face with a C-list jabroni.

Oh yeah, Rick also talks everyone into sneak attacking Negan’s men. Rick offers everyone a choice, of course. It’s not his way or the highway, even though the deal has already been made with Hilltop and their food is safely horded away in Alexandria’s coffers. Morgan expresses doubt in the plan which counts for nearly nothing. He’s kinda like the Bernie Sanders of Alexandria. You’re probably right, Morgan, but shut the hell up anyway.

Rick’s plan works to perfection… at first. They trick the night guards, murder them, and everyone rushes inside to commit some of that good time killing favored by the sort of people like The Wolves or the Governor’s Woodburians.

Glenn and Heath, obviously paired together because neither one has murdered any living folks, find themselves in a bedroom which offers each a nice victim to send to their eternal reward. There’s an obvious line here. We see from polaroids adorning the wall that these Saviors enjoy bashing people’s heads into brainy pulp, so they probably got it coming. It’s still heart-wrenching to see Glenn, the “soul” of the group as we’re told time and time again, trying to keep from crying as he slides his blade into a sleeping man’s head. Heath doesn’t seem to have the stomach for it, so Glenn helps himself to his victim as well.

Of course, G.I. Ginger has his doo rag tied too tight around his melon head and allows one of the Saviors to ring the alarm. This results in a deeply satisfying round of machine gun tag for the Grimes gang and the Saviors. The heroes clean house without suffering a single casualty. The episode ends with Rick and the gang discovering that during all the massacring Maggie and Carol got themselves captured while they were off standing around, being a plot contrivance.

All in all, this was an exceptional episode as all Greg Nicotero directed episodes tend to be. Special shout-out goes to Gabriel, quoting scriptures and shooting Saviors. And also Eugene for wearing the most inappropriate shirt in the entire apocalypse.