The English: Season 1 REVIEW – Best of the West 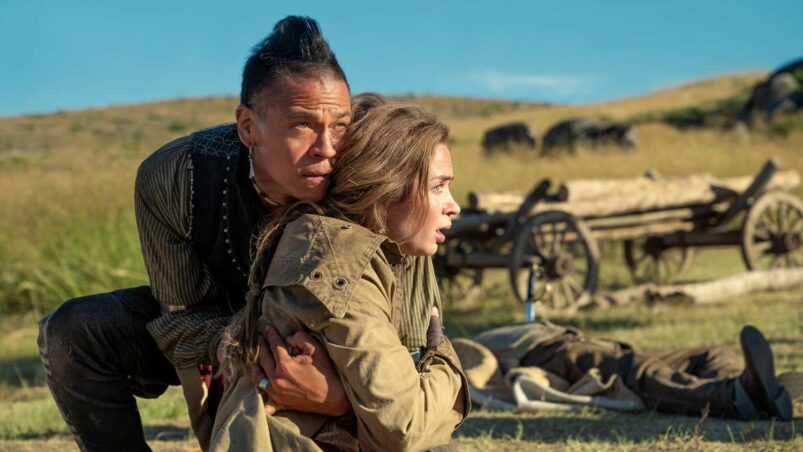 The pivotal fourth episode of sprawling Western epic The English opens with a striking, gruesome image. Against the brilliant blue sky of the Great American Plains, a man is seen held upside down, suspended spread-eagled by ropes which pull each one of his limbs in all directions across the crude wooden frame that holds him aloft. A raft of arrows and spears bristle from every aspect of the poor unfortunate’s lifeless body. A warning, we are told, so that others may learn from his mistake. The man, a Cheyenne, has fallen foul of a rival native tribe, and this is his gruesome reward.

It’s an image that perfectly encapsulates The English’s vision of the Old West: an untameable land of opportunistic avarice punctuated by moments of sheer, almost incomprehensible brutality. Set in the late 19th century, the lawless expanses of the newly-forged American States are becoming increasingly tamed, but the cruelty and barbarism that have defined the European colonisation of North America linger like a plague. Director Hugo Blick’s expansive, occasionally meandering drama is one characterised by pain and grief amid the bloody forging of a new civilisation.

The show primarily follows the intertwined stories of Emily Blunt’s Lady Cornelia Locke, a noblewoman from London looking to take revenge on the man who killed her son, and Chaske Spencer’s Eli Whipp, a former US cavalry scout and member of the proud Pawnee tribe seeking to claim his ancestral birthright and avenge an atrocity from his past.

The events which bind the pair towards a common cause aren’t immediately clear, and it takes until the aforesaid fourth episode before we truly understand why so many of the events are transpiring. Around the newly-created town of Hoxom, a haughty English rancher complains of the slaughter of his cows, while a young Austrian woman has a similar grievance regarding some stolen cattle, events which initially don’t seem to have much overall significance. Yet as is true of almost everything in The English, pivotal story revelations require attentiveness and saintly patience before they become transparent, only coalescing once all of the elements are disclosed. Revealing the true nature of each grievance would spoil the story – suffice it to say, almost everyone we meet shares a right to feel aggrieved.

This is a style of storytelling which will infuriate some while deeply rewarding others. Early episodes are tough to follow simply because it is impossible to understand many of the characters’ motivations without the revelatory events of episode four, but the rewards are great for those willing to stick with the long and occasionally arduous journey. The English takes its time, wallowing in its gorgeous setting and savouring each moment in this stunning, vicious landscape – every swish of a horse’s tail, every finger hovering over its rifle’s trigger, every piercing gunshot wound.

Blick takes his time under the massive Western sky, only sometimes to the extent that his long, lingering shots and slow, mannered passages of dialogue pass straight over into pure genre parody. The English looks and sounds just as you would hope a western epic would, full of grime, dust and gunsmoke seeping from the screen and enveloping you like a sandstorm. In capturing the beauty and brutality of the Old West, The English is a spectacular, bloody triumph, each image like a carefully framed diorama or meticulously composed landscape painting. Attenborough aside, I don’t think I’ve seen a BBC production look this good for a very long while.

If there’s clearly a desire to blow a large wad of the license fee on ensuring that every single one of its shots is a masterpiece of composition and arrangement, the showrunners are also keen to indulge in tropes and cliches so familiar to fans of the Western genre. Post-modern or not, this is still the Old West, one characterised by hardened men, villainous opportunists and corrupt sheriffs, a land where communication is taciturn and anyone speaking more than six words per sentence is likely to be regarded as an overly verbose eccentric.

Just because Blick’s creation is more mature in tone and more glacial in pace, don’t expect any fewer tense shootouts, heroic soundbites or horses galloping majestically over the seemingly endless prairies. It is to the show’s benefit that it chooses to indulge in these tropes rather than haughtily shying away from them. It wouldn’t be a Western without these vital elements.

There does exist a creeping danger that the world portrayed tiptoes across into the realm of fantasy or romanticisation, though. Periodically, the natives fall victim to excessive sentimentalism, especially compared to the callous self-righteousness of many of the colonisers who speak of the need to assimilate them into Christian “civilisation”. When Whipp describes the stars’ meanings or Native views on death, it threatens to make him into a wise old archetype, even if most of the time Spencer’s quiet excellence prevents this from fully transpiring. The English is instead more effective when it shows the depths to which the embattled natives have been forced to resort, such as the case of an elderly indigenous couple turning to murder and extortion as a means of survival in a white man’s world.

Murder and extortionate huckstering are by no means the limit to the crimes on display. The English isn’t an overtly gory venture, but there are moments of barbarism, cruelty and terror so visceral and unsettling they feel as though they belong more in a horror than a prime-time Western drama. A villainous, half-scalped crone named Black-Eyed Mog stalks the crags and crevices of the land like a monstrous phantom, whereas Rafe Spall’s psychopathic land-grabber David Melmont practically reeks of an unlimited capacity for evil.

This is a barren land scorched by fire and sun that has turned good men bad and made bad men worse. The golden age of the gunslinger may be coming to an end, but there’s no sense of the West feeling any less wild. If anything, its vast, silent expanses only serve to render it all the more oppressive, as every explosive gunshot or curdling scream echoes all the louder against the quiet, unmoving backdrop of the Great Plains. The land and its promise of Manifest Destiny have made people ruthless and cruel. To quote one old cowpoke, speaking of the ruthless Melmont: “Sometimes freedom ain’t pretty”.

This is the show’s ultimate ethos: that the endless freedoms and opportunities afforded by the New World have made men savage, and that those men who seek to civilise a lawless nation are often the ones who are the most uncivil. The English is without question an acquired taste, a slow-burning saga that unfolds slowly over its six long episodes, punctuating its protracted, deliberate narrative with moments of sheer terror amid the gorgeous, imposing backdrop of the wild American landscape. Some may find it a frustrating, even fruitless journey, but for those willing to invest their time, and attention, it’s an incredibly rewarding evocation of the depths to which humanity will sink when ensnared by the prospect of Manifest Destiny. 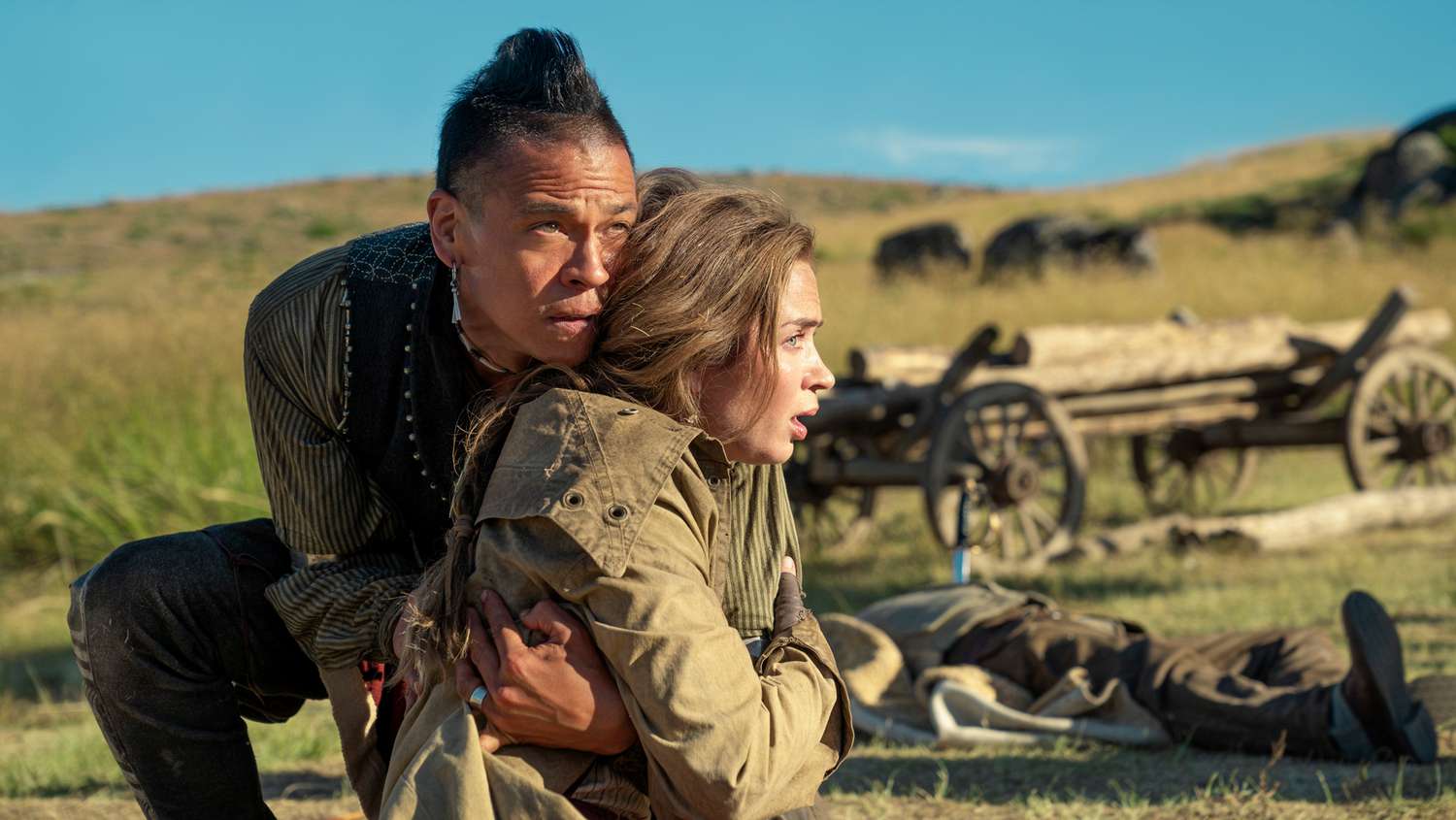 Verdict
Bloody and brutal but also immensely satisfying, The English is everything a modern Western epic should be.
8.5
Cultured Vultures is a pop culture website established in 2013 covering all things gaming, movies, and more. We eat your words.
All The News On The Biggest Games