SummerSlam 2021: The Mistreatment of Bianca Belair and Becky Lynch 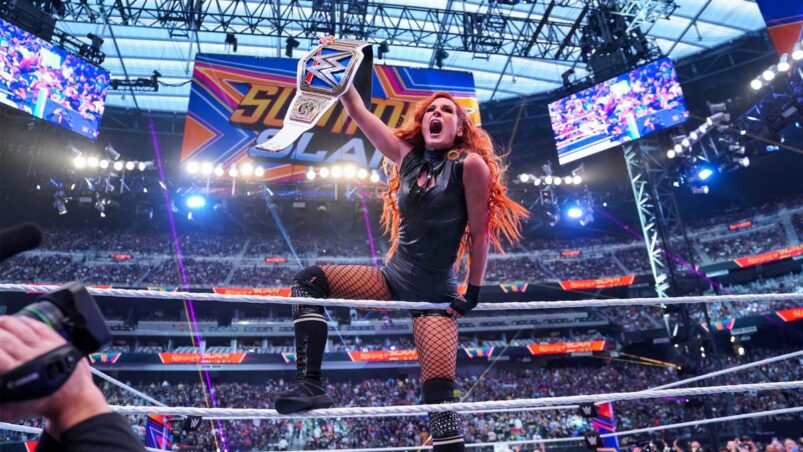 SummerSlam is one of the big four pay-per-views in WWE, a colossal moneymaker, and usually used as a kind of mid-season reset for larger plotlines, as well as a time to shake the belts up a bit. For fans, it’s a promise of big matches, a degree of spectacle, and usually offers a couple of big names, celebrities, or a surprise return. This year’s event checked almost all of those boxes with a stacked card, several good matches, a silly segment featuring Xavier Woods’ rad throwback gear, and a pair of returns to pop the crowd.

It’s hard to say the show wasn’t enjoyable overall, even if I’m not much of a Brock Lesnar fan and a few bouts didn’t end the way I wanted. There were several quality matches and new deserving champions, but the other – arguably bigger – return that night left a bad taste in my mouth. This was the surprise arrival by Becky Lynch, who fans have been chanting for, anticipating her inevitable appearance. The Lass Kicker’s reemergence after a 15-month absence wasn’t just huge for the women’s division, but the WWE as a whole. It should have been amazing.

On the other side of that coin was Bianca Belair, a fighting champion who won her belt on the first night of WrestleMania 37. She was supposed to face Sasha Banks at the biggest show of the summer, the same woman she beat to reach the top of the mountain, and this would have been the rematch for what Michael Cole called historic and epic, and a confrontation that Belair herself had presented as ‘magic.’ With that in mind, everything seemed in order for a quality confrontation with at least a bit of storytelling, but medical issues saw Banks removed from the card. This, however, wasn’t officially announced until after a video package built up the recent events between the two, showing a determined Bianca and a ruthless Banks, as well as an ecstatic entrance to a packed crowd for the champ.

Like many expected, Carmella took Sasha’s place as the new opponent. Bianca looked confused, even a bit hurt, and Michael Cole himself pointed out that, “this isn’t what Bianca Belair wanted,” and I imagine that statement couldn’t be any truer. After holding up the mic, she also addressed Banks and told her that it might not be tonight, but sooner or later the two will meet in the ring, and that almost came across like an understanding, or an agreement, to eventually conduct the match that both women wanted. Just as the title was being raised to start the match, a familiar theme interrupted the proceedings and the arena erupted.

No one can deny that the crowd went nuts. Becky was back, she looked radiant walking down to the ring, slapping hands with fans – just hope she washed them afterward – and the announcers were bigging the former champion up as she posed on the ropes, which she didn’t even need. Almost everyone seemed to be incredibly into that moment. Even I cracked a smile, as a fan of her work, it was incredible to see The Man welcomed back like this. A part of me knew the truth, though, that a match would mean Bianca Belair wouldn’t be walking out of Las Vegas’ Allegiant Stadium with the belt. I quickly came to peace with that, considering the great battles the two could have now, especially throwing Sasha into the mix down the line, and I thought we were about to see an example of that.

As the surprise and music began to die down, the looks on each woman’s face said a ton. Belair appeared untrusting, Lynch looked mischievously pleased, and Carmella saw that her chances of winning that night had just plummeted. We saw that the Princess of Staten Island was great at predicting the future, as Becky used more offensive maneuvers to remove her from the ring than she would need to win the belt, taking Carmella out of the equation and getting the crowd to chant her name. She even stops to throw her t-shirt to the crowd for a last bit of playing to the fans in attendance. When the two finally faced off in the ring, one challenger had the look of someone who knew they were about to be victorious, while the other was simply dejected and couldn’t seem to hide it.

Becky grabbed a mic herself and asked if the two should “blow the roof off this joint,” but what followed was nothing of the sort. It was a sucker punch off of a handshake, a classic heel move on a stalwart face champion. In retrospect, we should’ve expected it from whoever was filling in for Banks. Next was a Manhandle Slam, then one, two, and a deafening three. Sure, the crowd was going again a second later, but for several moments for those watching at home, it felt as if the air had been sucked out of the room.

The look on Bianca Belair’s face, sitting in the corner holding her head, was probably close to mine and many others watching, if even just for a fraction of time. Realization hit hard as The Man was yelling that she was back — it was done. From the start of the opening video package to the end of Becky’s celebration, this portion of SummerSlam took up around 19 minutes, but the actual match only lasted about 30 seconds. Bianca couldn’t believe it, having paused on the entryway, looking at her title in the hands of another woman, with only the images of the belt on her gear left as proof that just a few moments ago, it was hers.

Belair deserved better. Her initial run as champion had been handled quite well and the athlete looked as if she was living up to her moniker as the EST of SmackDown. In the previous episode of the show, she defeated two challengers one after the other, making her appear to be the strongest, as claimed. SummerSlam felt wrong. Some fans might say those hurt by it are simply being marks, but there’s a reason so many WWE fans feel let down these days.

It’s hard to imagine Belair herself not taking this choice a bit personally, dropping someone who put the work in for a cheap pop. SmackDown’s writing as of late seemed sharper – better than RAW at least – and the whole squash reeked of a touch from one Vincent Kennedy McMahon. Many have said that this is the kind of shock and surprise he likes, but it’s quick, dirty, and only favors one side. It isn’t the same type of deflation we saw when The Streak ended after a grueling match against Lesnar, but a disappointment and a bad call.

This is wrestling, however, and sometimes the fans have wilfully short memories. Depending on how Bianca is handled going forward, if she’s given her chance to shine against Becky or Sasha, this could all be a small weird spot in her career, but if she’s left to be embarrassed further, things could go much differently. It’s even more of a shame because the two could have put on a solid believable match, allowing Lynch the win while still keeping Bianca built-up and strong, losing to a returning champion who was never defeated for her strap, fighting against someone she couldn’t prepare for, and giving it her all, but that wasn’t in the booking.

It does no good to be necessarily upset about this. It won’t cause me to watch the product less, rather just lose a little more faith. As fans of Bianca and women’s wrestling, we should support her and demand better results in the decision-making, because the likelihood is she’ll get her chance again soon and make a spot for herself, even if the top of the pile gets crowded. Bianca is already wanting her title back and discussing a rematch. Right now, without knowing the future, though, it’s one of the most notable things in a packed weekend of wrestling, for many wrong reasons. The execution of it overshadowed Becky’s return and, sadly, feels like the mistreatment of royalty.