We don't want to be hackneyed and say the force is strong with this one, but... 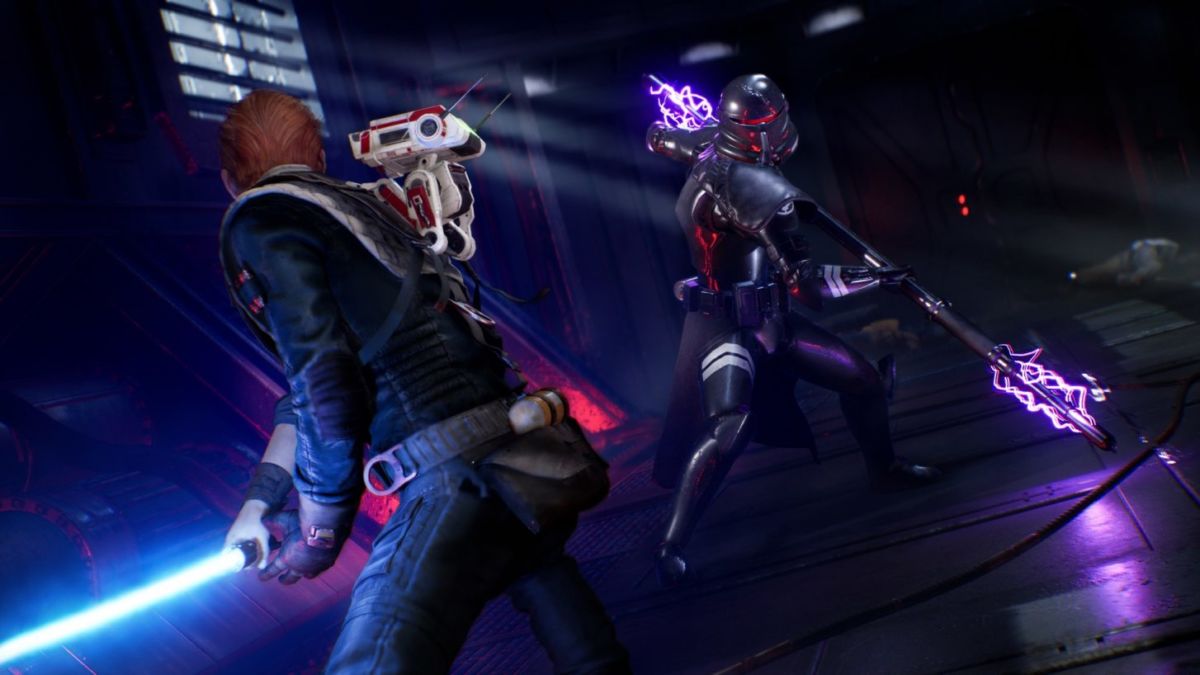 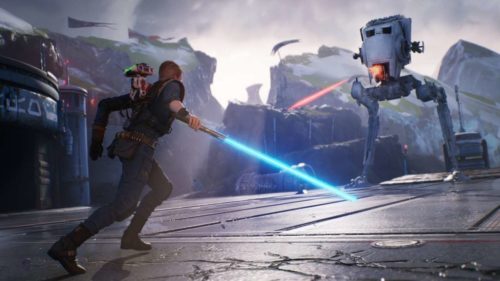 The Star Wars film franchise has been winning the hearts of viewers for decades, but gamers have been subjected to a mixed offering in recent years. Following the mediocre reception of DICE’s disappointing Battlefront reboot and its even more controversial sequel, acclaimed developer Respawn aims to make good on EA’s Star Wars rights with Star Wars Jedi: Fallen Order. And though it occasionally feels like a discordant mix of multiple genres rather than a fully-realized version of a single one, it’s an incredibly good time and a substantial improvement over the existing roster of games released since EA acquired exclusivity to the brand.

When Emperor Palpatine enacted Order 66 in Episode III: Revenge of the Sith, demanding that Clone Troopers kill their Jedi leaders, a select few Jedi went into hiding to escape being slaughtered. Fallen Order takes place five years after and places players in the shoes of one such Jedi, Cal Kestis, who has been quietly working as a ship scrapper. But when an Imperial Probe Droid catches a glimpse of Cal using his force powers to rescue his close friend from a near-fatal fall, the Empire quickly unleashes an inquisitor known as the Second Sister to track him down and kill him. During his daring escape, Cal is rescued by a former Jedi and tasked with rebuilding the Jedi Order. 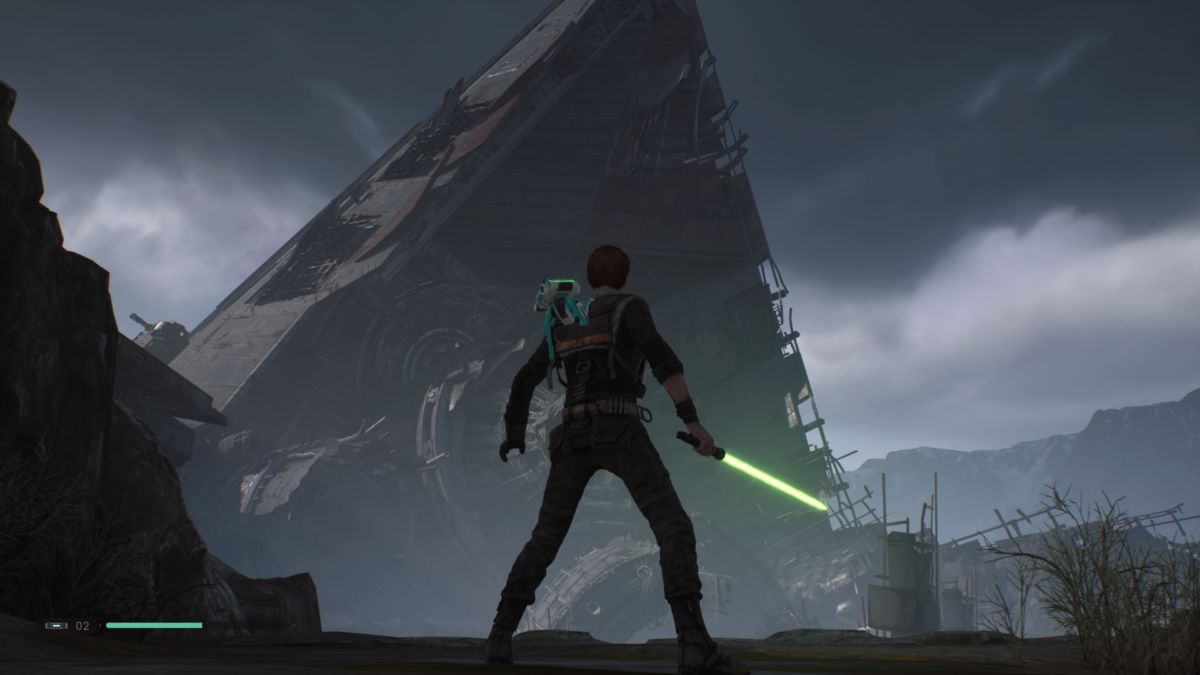 Fallen Order’s story and characters blend into the Star Wars canon effortlessly with the franchise’s trademark blend of humor and emotionally-charged dialogue. I was especially happy to see a few familiar faces show up, especially one blink-and-you’ll-miss-it cameo early on in the story. And though the plot’s surprises can be seen from a mile away, it’s still remarkable how comfortably this story fits and how well it bridges the gap between some of the events leading into the original trilogy. By the end of the 20 or so hours it took me to see the credits roll, I felt that I had watched a really good Star Wars movie, despite some occasional dialogue that fell out of sync with the lip animations from time to time.

And that’s thanks to the fact that the game is absolutely at its best during its exceptional cinematic set-pieces that really feel like they’re embracing Star Wars in all its glory, like when I climbed up the vines growing on an AT-AT, snuck into the cockpit to knock out the drivers, and then piloted it to mow down the Empire and interrupt an invasion. It’s during these segments that the game finds its own voice and feels truly special, and some of the more surprising events scattered throughout the story lead to jaw-dropping visuals and set-pieces that reminded me just how fascinating the universe of Star Wars can be. 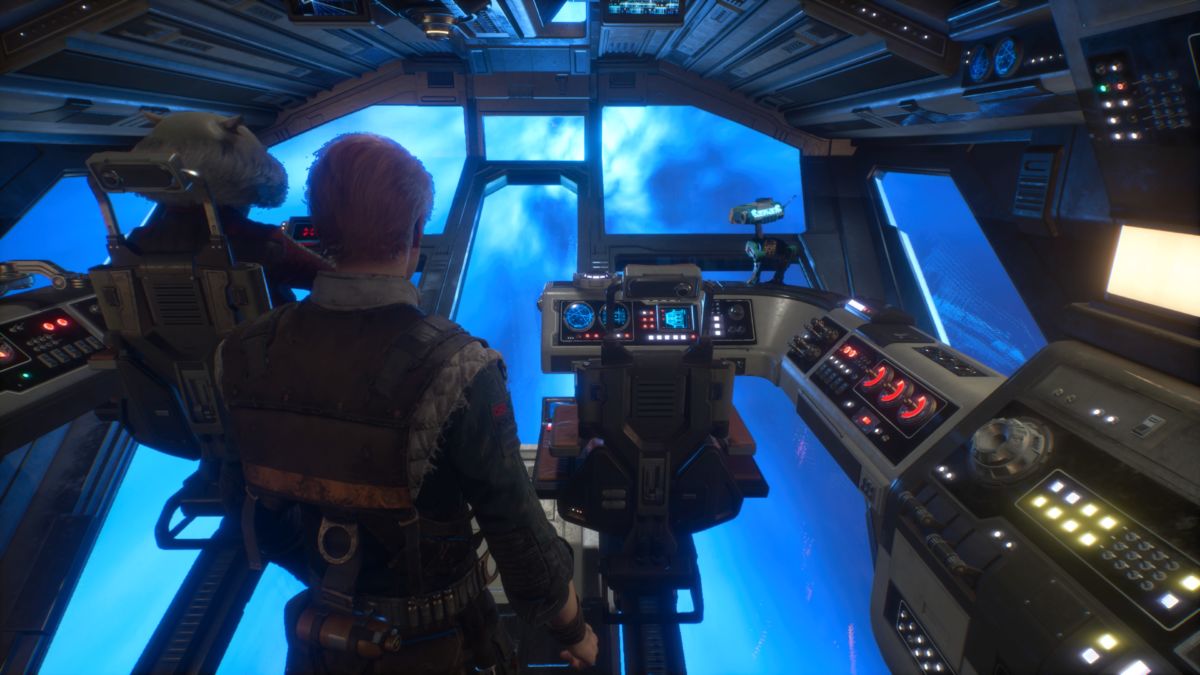 Outside of these heart-pounding sequences, Fallen Order spends most of its time borrowing gameplay from other franchises. You climb, balance on beams, and swing on ropes like in Uncharted. You rest at meditation points to reset enemy encounters and healing items and engage in challenging lock-on combat akin to Dark Souls. You solve environmental puzzles that make use of recently-acquired powers as you might in a Zelda game. You find new powers that allow you to revisit old areas and progress further in them like in Metroid or Castlevania. Fallen Order rarely innovates so much as it paints a Star Wars aesthetic on these existing concepts, meaning it never fully capitalizes on any one idea in its efforts to appease them all.

But that’s not to say that there isn’t tons of fun to be had when you’re actively engaged in the game’s core gameplay. Combat is especially enjoyable, forcing you to adeptly learn to dodge or parry perfectly between swings of your lightsaber while managing a force bar that allows you limited use of one of Cal’s fun force-specific abilities. You can force push enemies away to disrupt their attacks or use force pull to bring them to you, grab them around the neck, and stab them with your lightsaber. You can even stop a blaster bolt in mid-air and pull an enemy into it to kill them. There’s plenty of creative fun to be had if you’re willing to experiment. 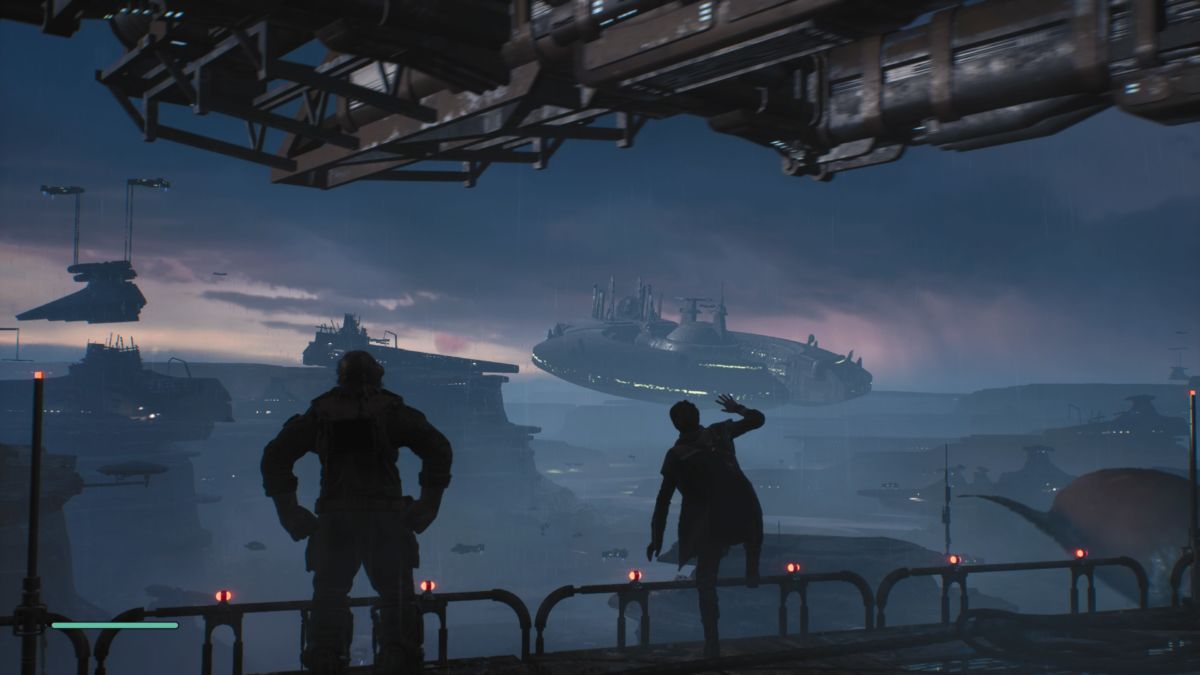 Fighting or finding scattered echoes (audio logs) grants Cal experience that can be used at meditation points – Fallen Order’s answer to bonfires from Dark Souls – to purchase a variety of skills ranging from health and force increases to new abilities like a lightsaber throw or a powerful vertical slice. Additionally, your adorable robot companion BD-1 plays a major part in both combat and exploration, allowing for cool abilities like hacking an enemy droid to fight for you or granting you the ability to open locked chests with an upgrade found during the story.

Each of the game’s planets are visually-distinctive biomes, and Respawn does a phenomenal job of getting significant mileage out of each of them through the use of areas that take place above and below ground. Take for instance the planet of Zeffo which houses everything from an underground ice cavern, a massive and mysterious tomb, lush mountain cliffs to climb, and an overgrown settlement occupied by the Empire. Every planet is brought to life with gorgeous visuals and unique alien creatures that range from fightable enemies to background wildlife, and the manner in which the levels loop together through unlockable shortcuts makes them feel like realistic, inhabitable spaces. The world-building on display here is quite staggering throughout. 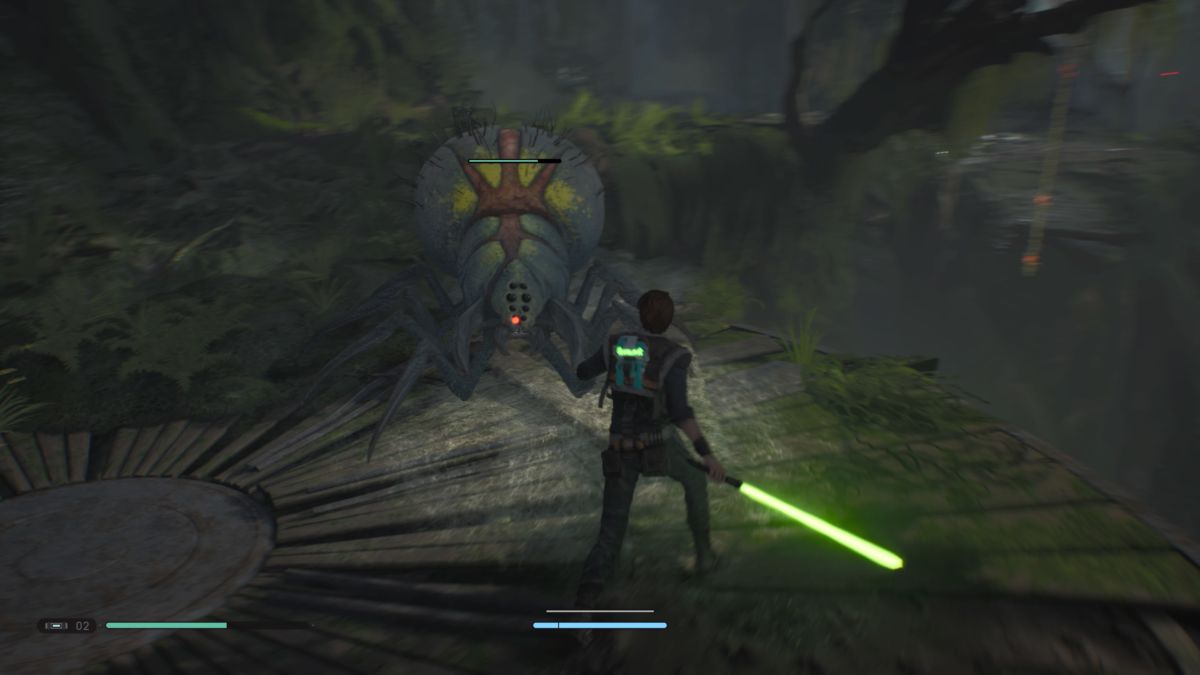 My time spent on the Wookie home world of Kashyyyk is perhaps one of the most memorable in my three decades of gaming. A dense forest thick with fog and teeming with strange fauna gave way to a palm-sweating climb up an unfathomably massive, sacred tree. After I nervously swung across vines, wall-ran across the bark, and landed on bouncing mushrooms that propelled me to new limbs, I found myself perched on a safe spot at dazzling heights and admired the vast and beautiful forest below as birds and giant winged beasts flew by. And as I reached the crest of the tree, I was met by the game’s most magical and unexpected moment that left me in awe for hours after.

As majestic as the locations may be, however, Fallen Order often feels like a linear adventure forced into a Metroidvania design just to pad playtime. Most of Cal’s journey is a straightforward affair of going from point A to B, and since there is no equipment or helpful items to find aside from a handful of health and force upgrades, optional exploration is rewarded mostly by cosmetic items for your lightsaber, clothing, droid, and ship. I really wanted a compelling reason to revisit that chest I couldn’t reach earlier – maybe an optional enhancement of some sort that would contribute to my stats in a way that made backtracking worth my effort – but all I got was a new color for my poncho. Riveting. 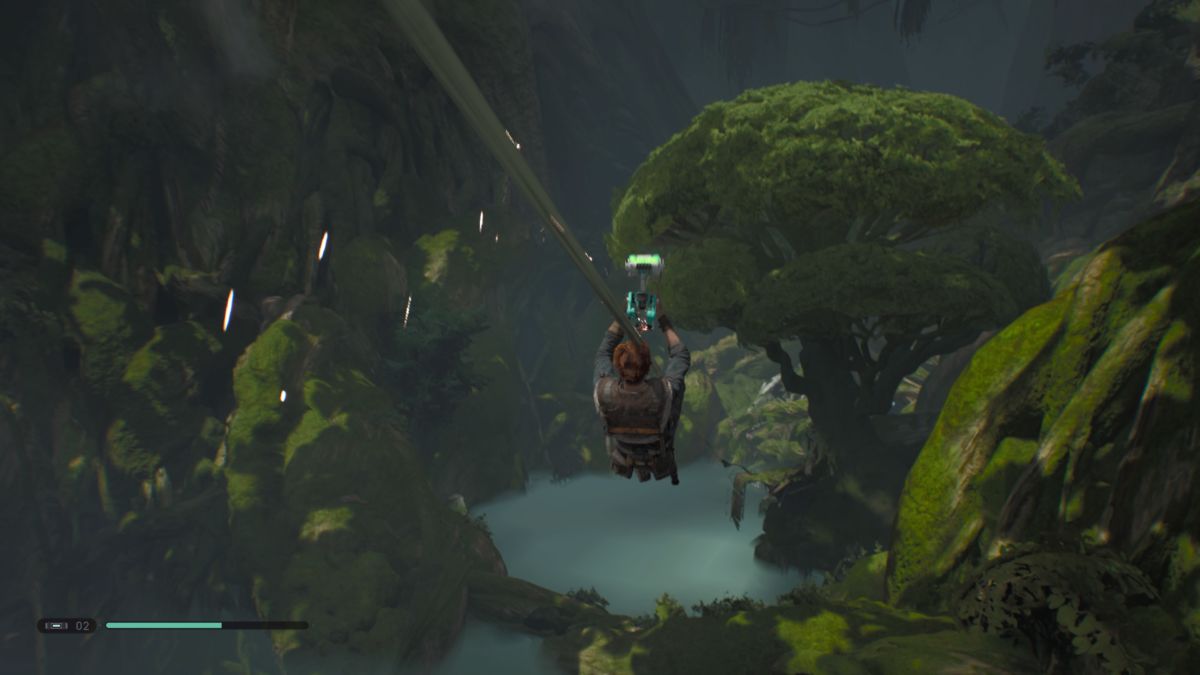 It felt exploitative of my time to make me consistently retread my steps through content that no longer offered me new experiences, and it bred resentment when I realized that Cal already knew most of the force powers needed to unlock new pathways but didn’t use them until it was suddenly necessary for plot advancement. This was exacerbated by the lack of fast travel between planets or even meditation points, meaning whether I was tracking down cosmetic items or making my way to the next story objective, I was forced to fight and run my way back across the entirety of expansive levels to reach them, all while trying to study and decipher BD-1’s clunky and vague holographic map.

Still, I’ve never played a game that so brilliantly captures the essence of its source material. Star Wars Jedi: Fallen Order makes up for its pacing issues with how it nails the dialogue, characters, and sense of enchantment of Star Wars in such a way that makes you feel as though you’re temporarily living in that galaxy far, far away. If you have the patience to spend a few extra hours retreading old ground in its visually-stunning levels to get to the meat of the game, you’ll probably find it worth your trouble to see Fallen Order through to its bone-chilling final moments.

A code was supplied by EA for the purposes of this review.

Verdict
Star Wars Jedi: Fallen Order suffers from some annoying pacing issues, but the attention to detail and fundamentally solid gameplay makes it the best Star Wars game in over a decade.
8