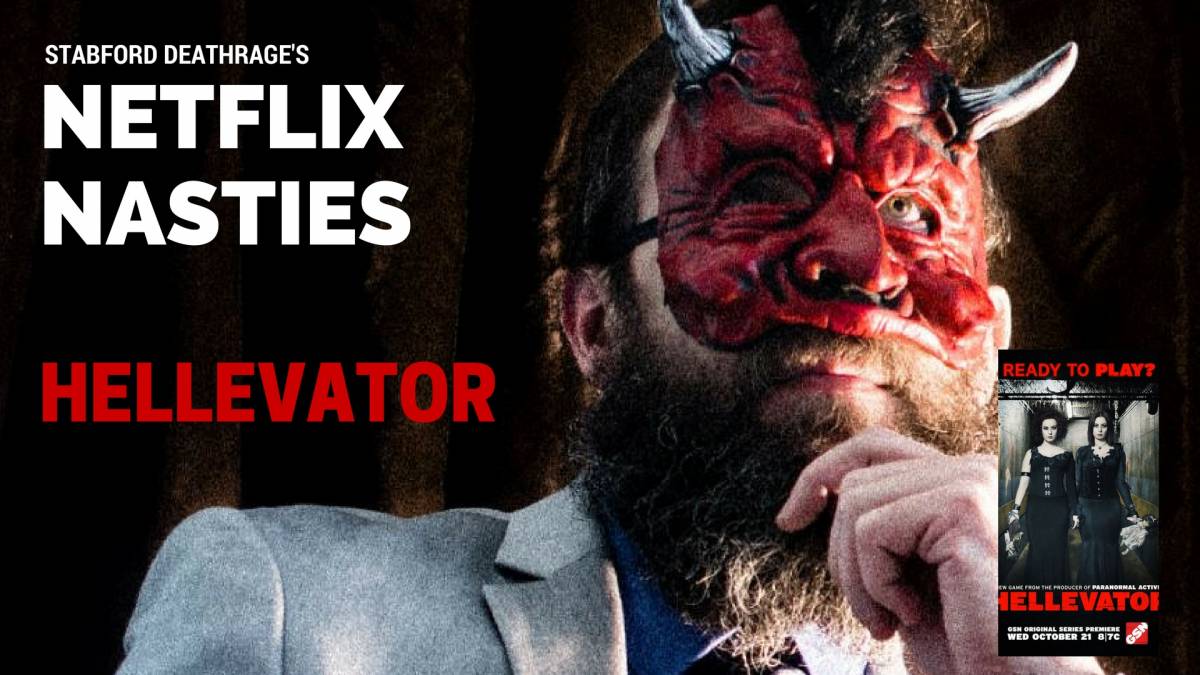 Regular people compete in ‘horrifying’ challenges in a slaughter house for cash prizes in this TV game show.

Maybe you haven’t really noticed, but in my opinion, the selection on Netflix might be the worst it has ever been. There’s so little to watch I was forced to watch a 7-hour long program devoted to a train ride in Norway. Maybe you’re familiar with my review of that program. Maybe you aren’t, but you should probably check it out. Anyway, there is currently nothing of interest on Netflix at the moment, and it sucks.

Perusing the Recently Added feature on Netflix gives us the following choices: Conspiracy, a series devoted to aliens, faked moon landings, and secret assassinations, which actually sounds kind of intriguing and I think I’ll add it to my queue. Also, Witches: A Century Of Murder, which investigates 17th-century witch hunts in Britain, which is also up my alley, so I’ll add it as well. And finally, Hitler In The Andes, a short documentary film investigating rumors that Hitler escaped the war in Europe and fled to Argentina, which is another lurid conspiracy thing I going to be furious for watching in the first place.

I’ve lost my train of thought. Anyway, there aren’t many feature films on Netflix right now that I haven’t already watched. I don’t really enjoy television programs, and I don’t have time to watch them. I really don’t like reality programs, because I’ve never really cared for reality. If I wanted to watch reality, I’d look out a window. I want to watch phony people doing phony things, preferably with phony blood. Which brings me to the reality TV program Hellevator.

Two cackling gothic queens clad in corsets watch from a control room as scaredy cats dressed in pastels wander around in the dark and have their fears exploited for cash while being ridiculed mercilessly. First of all, the contestants probably shouldn’t have divulged their deepest fears. Newbie mistake. If someone asks you what you’re genuinely afraid of, tell them something innocuous, like cilantro, for instance. You can always pick cilantro out of your meal. Picking the image of a monster lurking under your bed from your brain is a bit of a challenge, or so I’ve heard. I wouldn’t know.

I could be wrong, but it seems as though none of the contestants have ever seen a horror film or attended a haunted attraction. I personally find that to be strange and unusual, considering I often go out of my way to hang out in cemeteries, watch terrible horror films, and spend the night in actual haunted places. Don’t average, ordinary people do that? I wouldn’t know, since I don’t know any average, ordinary people. Actors dressed as clowns, or killers, or killer clowns don’t scare me. People dressed as sports mascots scare me. Oops, maybe I shouldn’t have told you that. Also, average, ordinary people dressed in sports apparel scare me as well. Probably shouldn’t have told you that, either.

Anyway, the first team in the series halfheartedly attempts to mess their teammates up by not telling them what unseen threat is approaching them, which doesn’t seem to make a lot of sense if they want to win thousands of dollars. Then the contestants crawl through cremated remains, open body bags that explode fake blood and phony bile on them, and cower helplessly from loud noises, unrelenting darkness, and flashing strobe lights, which sounds like an average, ordinary Saturday night for me. There are coffins, cobwebs, organ meats, scorpions, cockroaches, maggots, and sadistic quips. It’s not very scary. I’ve been in nightclubs scarier than these contests. Heck, I’ve been in Hot Topics scarier than this show.

Hellevator kind of makes me mad because I often go to scary places and attractions just for the heck of it, and I have to pay like a sucker and no one gives me any cash. I will end on a positive note; game shows would be infinitely better by the addition of gallons of fake blood. Or real blood. I’m not picky. A show where Chuck Woolery and Wink Martingale fight to the death is a game show I would certainly watch. Or better yet, the reanimated corpses of Richard Dawson and Gene Rayburn fighting to the death. Someone should make that happen. Anyway, Hellevator is mildly recommended if you like stuff that sucks.