Your hands are going to hurt after playing this one. 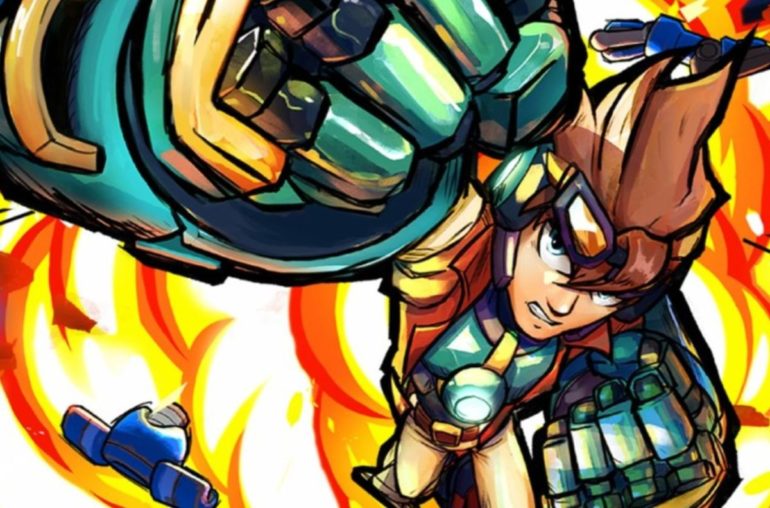 DEVS MUST DIE’s Skybolt Zack had a habit of sapping my EGX time and was the game I found myself coming back to over and over again.

Originally made as a student game developed in 2016, Skybolt Zack has been polished to come out on PC and Switch for the end of this year. It’s a neat mix of Guitar Hero-esque colour-based rhythm mixed with platforming action, although it might be misleading to call it a ‘platformer’ when you gain more points for not ever touching the ground during one of the playthroughs.

You play on a planet that has been devastated and turned into a mechanical scrapheap by a mysterious mechanical overlord, and Zack has had his limbs replaced by gigantic metal arms. Apparently your character was a bit of a mistake and is promptly tossed from the airship he is stored on, and sent hurtling to the ground, buried in a small mountain of spare parts among the shattered remains of Earth.

This cuts straight to the first tutorial mission and throws you right in, where you mash buttons to escape and begin learning the fundamentals of the combat and movement in Skybolt Zack. Unlike Crypt of the Necrodancer, you’re not pressing buttons in tune to a specific beat: this time, you’re pressing buttons to zip along the screen at breakneck speeds, or at least to speeds where you’re still able to comprehend what is going on.

READ NEXT: 41 Best Indie Games of All Time

The gameplay is frantic and satisfying when your character cuts through rows of enemies like an incredibly fast hot knife through butter. Colour-coded enemies denote what button you should press and are dotted around the level as little more than colourful piñatas for the eponymous Zack to bust open. For people who may have trouble with this, you can also change the control scheme, with a colour blind mode on the way in time for Skybolt’s release.

The music here is fitting and encourages you to mash buttons as fast as you can, to the point where you have to combine platforming precision with rhythmic button presses in a blur of colour and explosion. It’s hard not to become too complacent, though, as the action moves as quick and you want it, and it’s all too easy to fall out of step by one wrong button press or dodging something a second too late, like trying to rush through Sonic the Hedgehog levels. This is definitely a game that speedrunners can get into for some world record times and/or scores.

Gameplay usually last a couple of minutes per stage and it’s pretty rewarding replaying them to try and get higher ranks, especially when you get bonuses for not ever being hit or taking a break from fighting, and the levels all conclude with a door which has to be button-mashed to be broken through, a cathartic end to the frenzy of punches after each level.

It looks very stylish when you’ve played enough to shave seconds off your personal best for each stage and feels immediately rewarding. The story at the moment seems very light and only there to give light context to why you are playing in the first place, but it doesn’t seem to overstay its welcome in a game where action is the order of the day.

The game actually comes out very soon, but if you can’t wait that long, a demo is available right now on Steam, with a competition that encourages players to score as high as they can on the first level to unlock some community benefits and price discounts.