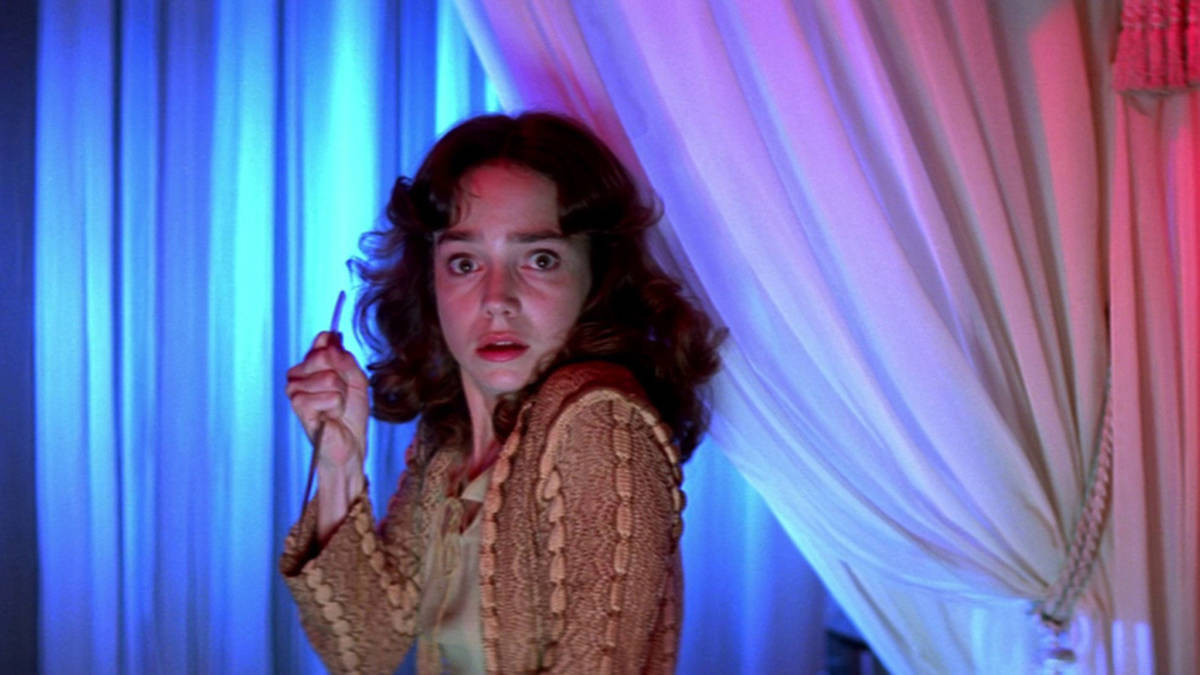 I primarily watch horror year round, so I like to approach every Shocktober with a specific objective in mind. This year, I decided it was a priority to dig up horror classics that I had never seen, or hadn’t rewatched since my adolescence. This is more to appreciate where horror has come from, than expecting big, in your face scares, but I was pleasantly surprised by all of the classics I watched in preparation for this week. Though, as to ensure no week of Shocktober was lacking scares, I included a healthy dose of modern horror to appease my gruesome appetite.

The original Evil Dead is a bad movie. There. I said it. Evil Dead 2 is what happens when a studio steps in and gives a director an actual budget to truly see their vision through. Bigger and better and all that.

Everyone’s favorite deadite killer Ash (Bruce Campbell) is back, and he’s here to do pretty much exactly what he did in Evil Dead. And that’s fine because with the bigger budget comes more bloody shenanigans and delivers what the film should have been the first time around. Despite returning to the same cabin, there’s never the sense of déjà vu given that Raimi has technically superior hijinks for Ash to endure. While Evil Dead’s concept was sound, it’s the sequel that introduces countless iconic scenes and lines that made the Evil Dead one of the most iconic and notable franchises in horror.

Repulsion is one of the most shocking films from the disturbed (and perverted) mind of Roman Polanski. A young woman, Carole (Catherine Deneuve), living in England finds her androphobia (fear of interacting with men) becoming unbearable. Shuttering herself in her apartment while her sister is away on vacation, Carol’s fear and paranoia have catastrophic results.

Few films from this era have shocked me as much as Repulsion did. Exploring Carole’s disturbing mental state is a nightmare, but done so through smart and carefully crafted cinematography. Her paranoia is palpable to the audience, which forms a bond with her character despite a lack of dialogue. Polanski’s twisted mind has conjured up disturbing ways that express Carole’s descent into madness. One scene in particular has Carole attempting to pass through her hallway which has sprouted hundreds of arms that grope her as she walks by. In another, she awakes to her apartment living room being 10x the size it was the previous day. Both drastic and subtle scenes like this evoke a sense that the framework of reality is bending into an unrecognizable shape. Unsettling, to say the least.

If you ever had doubts about cave diving, Neil Marshall’s (Doomsday) The Descent will swear you off it forever. A group embark on a cave diving trip in an attempt to reconnect with one another after a falling out. When one of them decides to alter their route, they become trapped in a series of winding caverns that are home to something other than them.

What makes The Descent so terrifying is the skin crawling claustrophobic nature of the its caves as characters cram themselves into minuscule tunnels. While I was never very interested in the drama between the characters, the film feels very authentic to its cave diver centric focus. Utilizing climbing axes, flares, and a night vision camera to defend themselves from what lurks within the caves feels natural. The claustrophobic and isolating nature of The Descent’s setting amplifies its scares given how unsettling they make the entire experience.

Few occult films can captivate and shock the audience to the degree that A Dark Song does. Sophia (Catherine Walker) has hired Joseph Solomon (Steve Oram), a medium, to help her reach out to her recently deceased son. They stay in Sophia’s secluded country home where Joseph leads a series of bizarre, grueling, and emotionally draining rituals. But as Solomon’s behavior becomes more and more strange and aggressive, Sophia begins to doubt him, and that’s when the things take a dark turn.

While some may not be a fan of the film’s slow pacing, the character development and tense atmosphere that builds over time allows the film to flourish with scares in its third act — a mechanical problem of most horror being that its third act is typically its weakest.

A Dark Song focuses on the mental and physical ramifications of occult rituals, in favor of boisterous, in your face scares, and is more memorable for it.

A timeless technicolor nightmare from legendary Italian director Dario Argento, Suspiria is a masterclass in an atmosphere, lighting, and a soundtrack that heightens the entire production. Suzy Bannion (Jessica Harper) arrives in Germany to attend a world-famous ballet school. She quickly discovers that the school is a front for more nefarious means as grizzly murders begin to occur as she attempts to uncover the darkness lingering within its halls.

From the opening scene, it’s apparent that Suspiria is a different kind of horror film. A scene as simple as Suzy walking through an airport captivates in a way that few films can. Quick cuts from her strolling towards the exit to the automatic door opening and closing show an attention to detail that builds anticipation even for the most ordinary scenes.

Then there’s Argento’s usage of illuminatingly bright colors which splash across sets, a contrast to the usual dark and dingy horror aesthetic. The film’s Willy Wonka color palette gives the film a look and identity that is all its own. Complimenting Argento’s unique vision of horror is Italian progressive rock band Goblin, who score the film. An odd contrast, but the soundtrack’s ability to unsettle is remarkable and uplifts the film.

The Thing forever impacted the horror genre, and thus countless films attempted their best to imitate it. A majority failed to recreate an inkling of the horror John Carpenter’s classic evoked. The Void succeeds where other imitators failed by telling a cosmic Cthulhu tale that harkens back to The Thing, while managing to be just as nauseatingly horrific.

Deputy Daniel Carter (Aaron Poole) comes across an injured man and rushes him to the nearby, soon to be decommissioned, hospital. Once arriving, the hospital is surrounded by cloaked figures that refuse to let those inside leave. Our protagonist learns that the real evil lurks inside the halls of the hospital, and they set out to uncover the dark origins of this evil.

The Void succeeds where others failed due to its use of practical effects, which give the movie an authenticity that most indie horror films would die for. Its creatures are gruesomely shocking and aren’t soon to be forgotten. One of my favorite cosmic horror films of the last few years.

It is hard for me not to rave about Panos Cosmatos’ (Beyond The Black Rainbow) second film Mandy, but I’ll do my best. While his first film wowed me with its unprecedented visual and aesthetic style, I found it lacked substance. Mandy continues Cosmato’s exceptional style by crafting a fever-like dream world for his bizarre characters, and the audience, to explore. In what I consider to be the best revenge thriller of the year, Mandy tells the story of Red (Nicholas Cage) and Mandy (Andrea Riseborough), whose secluded woodland life is upended by a fanatical cult led by Jeremiah Sands (Linus Roache).

What follows is a tour de force of cosmic darkness and depravity as Red enacts revenge against the cult and their otherworldly masters. The film’s physical violence and dreamlike nature are fuelled by its gorgeous cinematography, lighting, and its rip-roaring soundtrack. The year’s most unique movie experience.

Nightmare on Elm Street’s influence is so prevalent within pop culture that chances are you were familiar with the character before you even saw the movie. Freddy Krueger (Robert Englund) is a serial killer who’s burned alive by the townsfolk, only to return as an evil spirit that haunts children’s dreams.

While The Nightmare on Elm Street franchise fell into the 80/90s horror trap of riding the coattails of its sequels’ success — nine appearances in total — the original’s creative kills separate it from other slashers of the era. What made Krueger genuinely terrifying is his ability to exploit characters’ deep and darkest fears turned against them. Director Wes Craven’s (Scream) brash and twisted mind crafted countless creative kills throughout Krueger’s life, though the original Nightmare on Elm Street remains the most terrifying. It’s hard to forget scenes like the one in which a character is swallowed by their mattress before a geyser of blood erupts from it moments later. Craven’s ability to design these unique horrors is what made Nightmare on Elm Street more than just another slasher movie, leaving its impact on the genre forever.

Julia Ducomau’s Raw pulls no punches in telling a compelling coming of age story infused with destructively delicious horror. Justine (Garance Marillier), a vegetarian, is following in her sister’s footsteps and attending veterinarian school. Though when forced to eat meat during a hazing ritual, she begins to experience a newfound, uncontrollable hunger. Raw has a very distinctive dreamlike quality that I found to be overwhelmingly disconcerting. For instance, the rampant and public nature of hazing on campus-upper class-man drench students in blood and refuse to let them shower-all of which is seemingly fine by the faculty.

This strange, dreamlike nature of scenes lulls the audience into a false state of security, and that’s when the shockingly gruesome scenes occur. Raw isn’t necessarily a scary film; rather it’s an examination of relationships, hereditary, and learning to adapt in an ever-changing body/world…And things are eaten which should not be eaten. Not for those with a weak stomach.

John Carpenter’s Halloween has remained timeless in a way that few other horror icons have. The babysitter slasher Michael Myers — in the original Halloween — was never about grandiose monologues, drawn-out deaths, or exploring his backstory. He merely was the embodiment of evil. Carpenter’s double duty as director and composer cannot be understated in just how crucial it was to the success of the movie. His score for the film is iconic, forever instilling terror and caution to those who hear it. The score works in tandem with his signature cinematography and lighting that the two play off one another, elevating scenes in the process.

Except for the ending, what makes the original Halloween so frightening is how grounded it is compared to the other slashers of the era. His body count isn’t in the double digits. His limbs aren’t regenerating. Given his appearance, and Halloween night being the setting, it is feasible that he could blend in with trick or treaters wandering the streets. Ultimately, it’s this grounded nature that made the film plausible, and thus more chilling.