She Makes Comics REVIEW – A Celebration of Women in the Industry 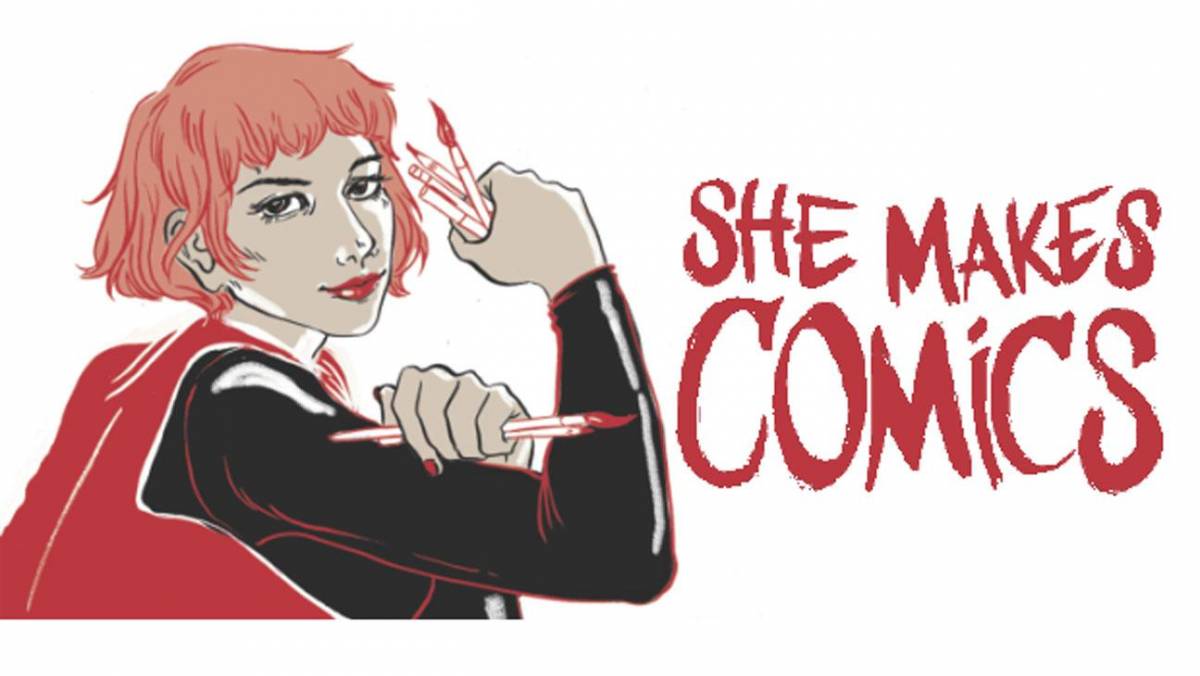 She Makes Comics is a documentary film about women in the comics industry, which sets itself the ambitious task of starting at the very beginning of comics as a medium: the early twentieth century.

Clocking in at just over 70 minutes in length, it’s a film that talks about how women helped to shape comics into the thriving industry that we have today, but it’s also a film that highlights the struggles and inconveniences of being a woman who also creates comics.

The film is getting a brand-new iTunes release tomorrow, so I thought I’d give a few of my (spoiler-free, if one can really spoil a documentary) thoughts on the film, for those who haven’t seen it yet.

The film opens with a brief history of women in comics, explaining how women were part of comics’ growth and development from the early 1900’s onward, starting with the earliest comics which were published in newspapers. It goes on to showcase the work of Silver Age artists like Ramona Fradon and Marie Severin, explaining how women have always been a part of the industry.

Most of these early-era creators are interviewed about their experiences with comics’ early days, and the passion and knowledge they have for the medium is stunning. Each interview revealed something new about comics, and served to give me that warm little fuzzy feeling in my chest that makes me want to dig through all my dusty longboxes. My only issue with this segment of the film is that it’s too brief, I would’ve loved to have learnt more about the early female pioneers of comics, especially as they don’t have the opportunity to tell their own stories the way that modern creators do.

She Makes Comics also features a host of interviews with popular and well-known creators including Kelly Sue DeConnick, Gail Simone, Becky Cloonan, Kate Leth, Louise Simonson and more. Each of these creators takes some time to talk about their work and their love of comics, but they also discuss some of the problems and difficulties that they’ve had throughout their career, including not being taken seriously and/or being considered a “fake geek girl”.

Don’t mistake She Makes Comics for being a pessimistic film though, it’s actually surprisingly optimistic and encouraging in its tone, taking the standpoint that women always have and always will create comics, no matter what the world throws at them. It’s not a film created to “bash men” as some potential viewers feared, it’s more of a celebration of women in the industry, and it serves as an opportunity to highlight some creators who don’t always get to have their voices heard.

The production quality throughout She Makes Comics varies from professional to amateur-looking, where the fixed-camera interviews with professional creators sticking out as being superior in quality to some of the reconstructive shots used throughout the documentary. It’s not a huge gripe, but I would’ve preferred a little more consistency overall.

She Makes Comics re-releases at a good time for the industry: we’ve had a year full of political turmoil where a lot of creators are feeling as if their voices perhaps don’t belong in a medium which had a traditional image of being all about skimpy spandex barely covering gravity-defying super-bosoms. But the documentary showcases that there is more to the industry than its negative perceptions, and that women will continue to create comics their own way as the comic industry grows and develops.

Recent comic book blockbusters are helping to create a generation of new female fans, and no-one really knows what the future holds for women in comics. The documentary does, however, offer hope for women in comics being shaped by women in comics: anything is possible with enough hard work, dedication and perseverance. As Captain Marvel says: “Higher. Faster. Further. More.”

Verdict
A great introduction to the world of women in comics, I just wish it was a little longer and spent more time on championing some of comics' earliest female writers and artists. The production quality is also variable, but this didn't pull me out of the experience too much, and the film left me feeling good about myself, and wanting to go and make some badass comics.
8
Cultured Vultures is a pop culture website established in 2013 covering all things gaming, movies, and more. We eat your words.
All The News On The Biggest Games