The end has come. 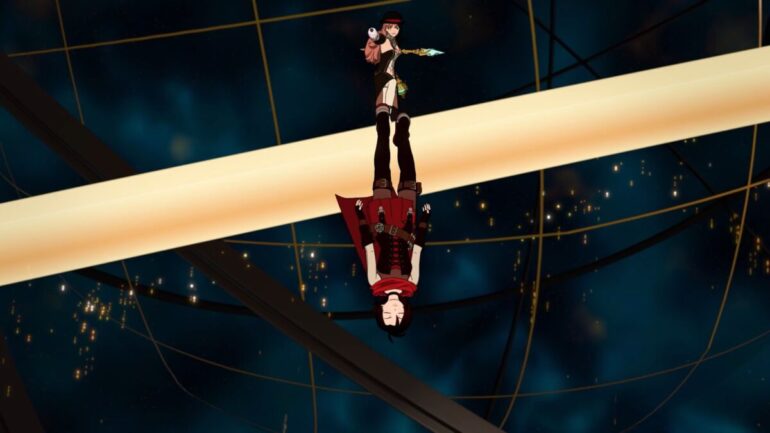 After everything that RWBY has fought for and strived to do to save the people of Mantle, the events of The Final Word are shocking, both for the right and the wrong reasons.

Before even opening the episode, the description includes a resource to the National Suicide Prevention Hotline, as well as a content warning, saying that the episode would contain “themes of death that may be distressing for some viewers.” While it becomes obvious later why this warning was needed, it’s a nice little touch, considering other fictionalised media which deal with these subject matters don’t necessarily always provide the resources for those affected by it.

‘The Final Word’ opens up briefly showing Salem putting herself back together, before switching to Ironwood and Winter fighting in the vault. It’s a cool little fight sequence, though the delivery of the dialogue is a bit off. While Ironwood sounds like he is struggling to talk in the middle of a fight, Winter’s smooth dialogue delivery doesn’t sound like she’s in a fight for her life.

‘The Final Word’ then changes to the pocket dimension where everyone is struggling against Cinder, then to Qrow and Harriet in the middle of their own duel. At one point, Harriet tilts the ship so that she can drop the bomb on Mantle. However, Robyn’s airship flies in front of the open cargo door, and though Elm and Vine try to convince her to stop, Watts remotely starts the countdown for it.

Back at the pocket dimension, Ruby and Neo are having their own personal duel – with Ruby only looking slightly annoyed at best at the person who ‘killed’ her sister – but despite help from her allies, she is also struggling, losing her weapon, Crescent Rose, in the process.

At the two airships, Harriet laments at the fact that she has “killed us all.” However, in what is actually a pretty decent scene, Vine sacrifices himself by using his semblance to contain the bomb, killing himself in the process. I like how Vine, the most logical of the Ace Ops, is the one who stops the bomb “for my friends,” and even if her change in character was a bit sudden, the animalistic cry from Harriet when she realises what is going on was genuinely emotional.

Going back to the pocket dimension, Ruby lures Neo to strike at her. However, she takes advantage of this move, using her semblance for a surprise attack, but getting struck by Cinder in the process. This leaves both of them hanging off the edge of the bridge they were fighting on at the mercy of Cinder, and though she has an opportunity to help pull Neo up to safety, she instead reaches for the Relic of Knowledge.

I don’t really like this, because it has the implication that any change in Cinder’s character was just for show, but it gets worse later on. With that being said, the soundtrack for this scene ranges between grandiose in the character ‘deaths,’ and just straight up awesome when the fighting occurs.

Cinder takes the Staff of Creation, letting Neo and Ruby fall into the abyss. Blake at one point tries to save Ruby, but Cinder renders this move futile, and they both fall into the darkness of the dimension below. Although this is meant to be shown in a way that makes the audience shocked because two of the other main characters have been ‘killed,’ while this could have been truly surprising if done right, it lacks any believability. It just adds to the theory that Yang survived her fall in the previous episode. More on that later.

The remaining group try their best to fight off Cinder, with Jaune telling Nora to go through the Vacuo portal and get help, not realising that she won’t be able to come back through. Cinder brutally stabs Penny with her Grimm claw, and though Jaune tries to save her with his semblance, she asks Jaune to kill her (which explains the content warning) and honestly the way this is done is beautiful.

The scene changes between Weiss and Cinder battling, as well as Ironwood and Winter in the vault. You never see Jaune actually commit the act, but the way it’s shot – him looking at his own fearful reflection in his blade, Cinder only stopping in the middle of her fight when she hears Jaune cry out, the camera focusing on blood dripping off his sword alongside his falling tears – is really well done.

The only thing is this scene would have been much more impactful if there had been some actual development in Jaune and Penny’s friendship! The most interaction the two get on screen is when he’s using her semblance to stop her virus. It would have had that extra level of emotionality if it was Ruby, Penny’s best friend, who was asked to do it.

‘The Final Word’ changes to a scene where in the final moments of Penny’s life, she communicates with Winter and gives her the Maiden powers. Now, I’m in two minds about this. One, I like the touching dialogue between the two:

“Penny, you were always the real Maiden at heart. I was just the machine. Just following orders.”

“You were my friend.”

“Thank you for trusting me with this. When you’re gone…”

I wonder if this means they’ll have a similar relationship to Oscar and Ozpin, where Winter can hear Penny speak to her. However, on the other hand, really? They brought Penny back, put her through the process of becoming human only to kill her off just like that? She was only a plot device that gets thrown in the bin as soon as her purpose to the story is served? Winter was the one who was originally supposed to receive the Maiden powers, so the end result was the same, just with more needless steps.

With her newfound Maiden powers, Winter easily defeats Ironwood and flies through the portal to aid Jaune, who breaks his sword while fighting Cinder. The two battle, but in the process, Cinder attacks the fleeing Weiss and Jaune, causing the former to fall into the abyss. This is another genuinely good moment, as the emotionality of Winter trying and failing to save Weiss is brilliantly animated and acted. Also, the mini breakdown she has and the absolute rage she flies into is everything that Ruby’s reaction to Yang’s ‘death’ should’ve been!

A wild cry from Salem makes the three characters flee the pocket dimension, with Cinder using the staff to make everything in it to disintegrate. Winter is able to escape, but Jaune falls to his apparent doom. In Vacuo, Oscar, Ren and Emerald are only just able to protect the refugees from Grimm attacks. and Winter joins the fight against the next wave of monsters.

Back at the vault, Cinder looks smugly down upon a defeated Ironwood before Salem joins her. In a moment of fear, Cinder lies to her about the events of the pocket dimension battle, as well as the Relic of Knowledge’s last question, something which Salem apparently believes. When Salem asks Cinder what she created with the staff, she replies “I merely added more flames to the fires of Atlas,” as Watts is shown struggling to escape a burning room.

Here’s my biggest problem with this episode: Cinder finally getting some development? Down the drain. She’s still the smug villain who smirks her way through everything, meanwhile probably killing off an actually compelling antagonist. It would have been interesting if Salem saw through Cinder’s lies and killed her on the spot, but no. She doesn’t get punished. Debatably, Salem could also know this, but is only keeping her around as she is one of the only allies she has left, but it was incredibly disappointing.

Ironwood tries to take a shot at the pair, but they escape, Cinder smugly saying to him “and that’s checkmate,” making it the final word of the episode. Atlas comes crashing into Mantle, the Ace Ops watch in stunned shock along with Robyn and Qrow – who wordlessly breaks down when he can’t reach his nieces – before ‘The Final Word’ closes on the rubble of both cities being flooded (this a reference to Atlantis?)

But it’s not over. The credits feature a track called ‘Friend’ which focuses on the friendship between Ruby and Penny (way to add insult to injury, Rooster Teeth, especially to the Nuts ‘N’ Dolts ship fans) and as with every volume, the finale has a post credit scene. This one has Crescent Rose sticking out of a sandy beach, as the camera pans out to reveal a large jungle (convenient failsafe you put in your design, Ambrosius.) As I’ve mentioned before, the show takes a lot of inspiration from fairy tales, and it looks like the next volume is going to follow team RWBY and Jaune in wonderland.

‘The Final Word’ is satisfying and disappointing as a finale. It’s gorgeously animated for a start. I really liked having the idea of the volume finishing on the bad guys winning, especially since now the most powerful military force in Remnant is out for the count. I needed a few hours to process it before I could write this, the ending felt so stunning.

I’m already looking forward to the next volume to see what lies in store for the characters, and seeing everyone’s reaction now that RWBY and Jaune are assumed to be amongst the dead. Also, what trials lie in Vacuo? Will Neo team up with RWBY after being betrayed by Cinder? How will RWBY escape this new world they find themselves in? Also, have Pietro and Maria just been chilling up in the CCT while all this has been happening?

However, the disappointing factors rival the good. RWBY as a show needs to trim down its huge roster of characters, but it’s started with the interesting ones. Among the dead, we have: Hazel and probably Watts, both equally interesting and likeable – though the former’s death was a satisfying moment of self sacrifice – Ironwood, a complex character who almost certainly died in the Atlas crash, and last but not least, Penny, a well-liked character who sadly only amounted to a convenient plot device.

Meanwhile, Cinder is still alive and kicking in all her blandness. The only one amongst the dead that I wasn’t too bothered about was Jacques Schnee. If anything, his death could introduce some interesting character development for the Schnee kids. 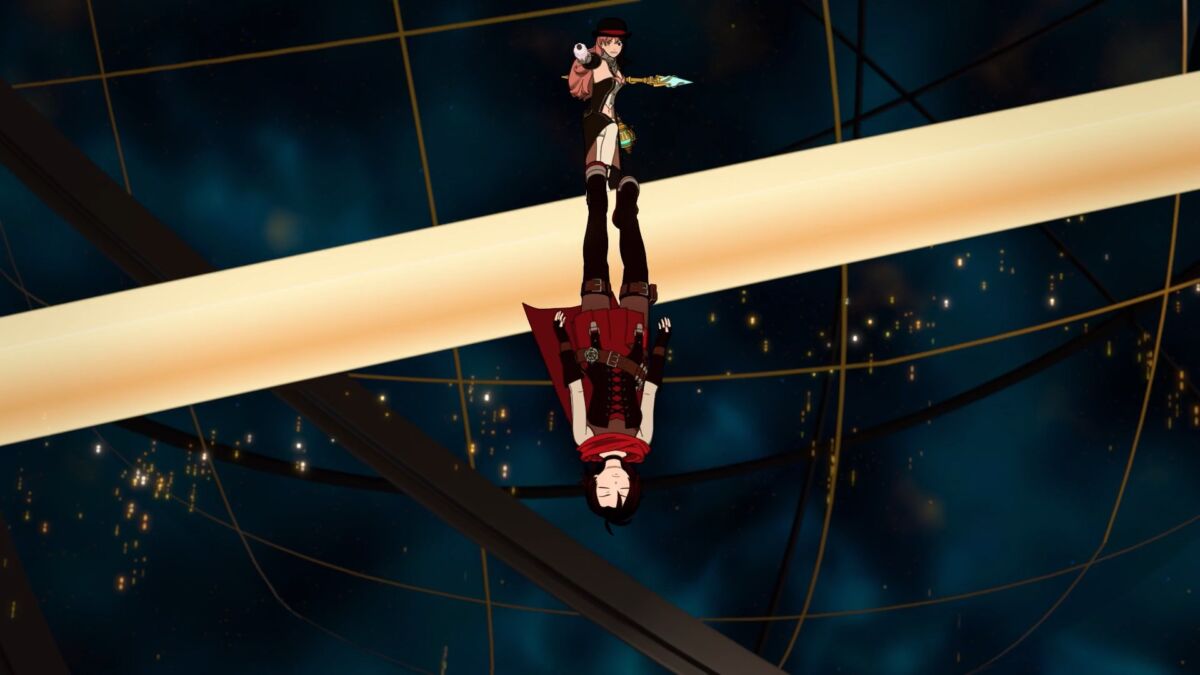 Verdict
The Final Word felt satisfying as a conclusion to the end of volume 8, but there are a couple of problems that prevent it from being ranked amongst the best episodes in the volume.
6.5
Cultured Vultures is a pop culture website established in 2013 covering all things gaming, movies, and more. We eat your words.
All The News On The Biggest Games