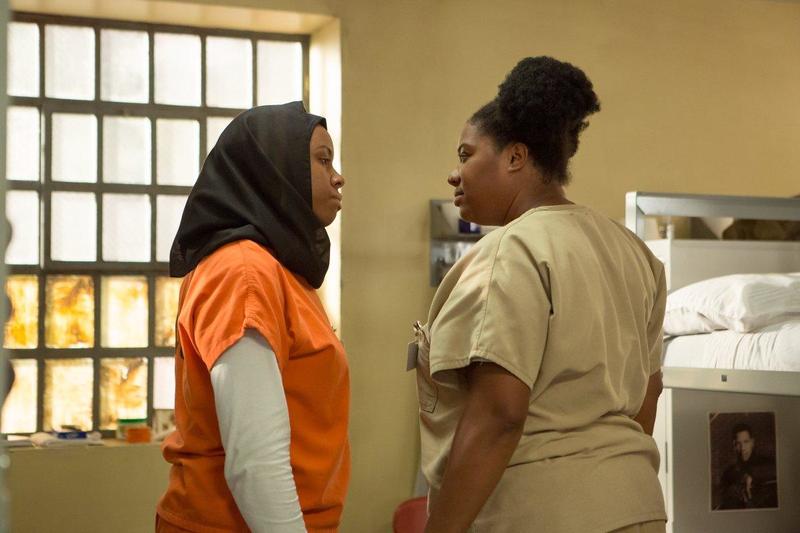 When Alison made her debut in Orange is the New Black’s fourth season, I was excited about this Muslim, hijabi woman. It’s rare to find representations of Muslim characters in TV that’s not riddled with racist and offensive tropes. It’s even more difficult to find representations of Muslim women who don the hijab. Since Orange is the New Black has a track record of a diverse cast of women, I was excited to see the Muslim addition; I was excited to see how this Muslim woman would add to the show’s diversity. It wasn’t long before it became clear to me that Alison Abdullah’s faith didn’t stretch any further than her hijab. I wanted to give her the benefit of the doubt but as episode after episode went on, I only became more and more tentative about the character and the lack of any actual Muslim representation in her.

When I was in school, girls used to ask me lots of questions about my hijab. Some of the most ridiculous questions were, “do you wear your hijab to bed?” and “do you wear your hijab in the shower?” As I watched OITNB’s supposedly “Muslim” character go about her day-to-day prison life, these were the conversations that I was brought back to. Because Alison Abdullah does not take off her hijab. We actually do see her in bed wearing the hijab. Though we don’t get to see Alison Abdullah in the shower, it honestly would not have surprised me if she was wearing the hijab there too. For anybody who’s unclear, OITNB takes place in a minimum security women’s prison, where the only men who frequent the place are male guards. For most of Alison Abdullah’s screen time, she’s surrounded solely by women in her living quarters. What was even more baffling was when Abdullah finally makes the choice to take off her hijab. In broad daylight. Outside. In the yard. Where literally anybody – including male prison guards could have seen her. So the more I watched OITNB, the more I realised that Alison Abdullah does not come close to representing my reality as a Muslim woman, nor the realities of the myriad of Muslim women that I know.

If that weren’t bad enough, I found very little in Abdullah’s character that actually linked her with any tenant of my faith. In the first episode she appears in, Abdullah claims that of course she would know East from West because she has to pray to Mecca five times a day. I thought, “great! We’re getting a character who prays daily namaz!” Unfortunately, we never actually see Abdullah praying to Mecca. Nor do we see her even own a prayer rug in her living quarters. We don’t ever see her uttering a dua to Allah. We don’t see her reading the Qur’an (but we do learn that she reads about Scientology – great!). We don’t hear her saying the phrases that are so common to anybody who practises the faith of Islam:  inshallah (if God wills it), alhamdulillah (used to express praise), mashallah (used to express joy or thankfulness). We have the Latinas conducting full conversations in Spanish (which I think is fantastic – don’t get me wrong) but we can’t get our sole Muslim character to speak a word of Arabic?

What we do get in a season that is littered with Cindy making joke after joke about terrorism and jihad at the expense of Abdullah. This is portrayed as insulting at first when Cindy and Abdullah are in the midst of their comic-relief fight for territory. But after they become friends, the terrorism and jihad jokes are just laughed off. As someone who has heard “terrorist” shouted out car windows while harmlessly walking down the street, this is not my reality either. And if one of my friends made a jihad joke at my expense, I don’t think I’d be so jolly about it.

Another thing that struck me about Abdullah was her general disposition – anger, aggression, antagonism. Now I firmly believe that Muslim people shouldn’t be held to some unattainable standard of perfection. I know many, many Muslim people. Some who are kind-hearted, loving, wonderful people. Some who are just not that great. But the thing is, no matter what kind of a Muslim person you are, your faith instils certain core beliefs in you. Like if you’re follower of any religion, you are instilled with certain beliefs that are a major part of who you are. If we look at Sister Jane Ingalls – this season she attempts to get into the SHU in order to save Sofia, but struggles with her beliefs as she practises non-violence. Even if we look at Yoga Jones – this season she struggles with her moral beliefs about materialism, calling herself a hypocrite because she’s gone against the things she believed in.

I guess this is a call to writing characters of different faiths in a believable way. It’s not enough to create a character and tack on a “Muslim” label. Being a Muslim is about more than just wearing a hijab. It’s about having beliefs that drive you forward, that motivate you and inspire you. It’s about having a relationship with Allah that you must work at and nurture. It’s about having beliefs and acting in accordance with those beliefs. The same goes for any other faiths that you choose to write about. People’s religions shape their characters and their life. It colours the way they speak and the way they act. To be able to write them, you have to be able to understand and show this.

Alison Abdullah could have been a great representation of a Muslim character. She could have preached her faith, prayed daily namaz, punctuated her native tongue with Arabic as most Muslims do. Instead, she was a caricature of a character, used for cheap jokes about terrorism.