Home
Movies
Once Upon a Time in the West: Sergio Leone’s Novelistic Western
Movies
·6 min read

Once Upon a Time in the West: Sergio Leone’s Novelistic Western

Once Upon a Time in the West was once not nearly as revered as it is now, just over fifty years since its release. 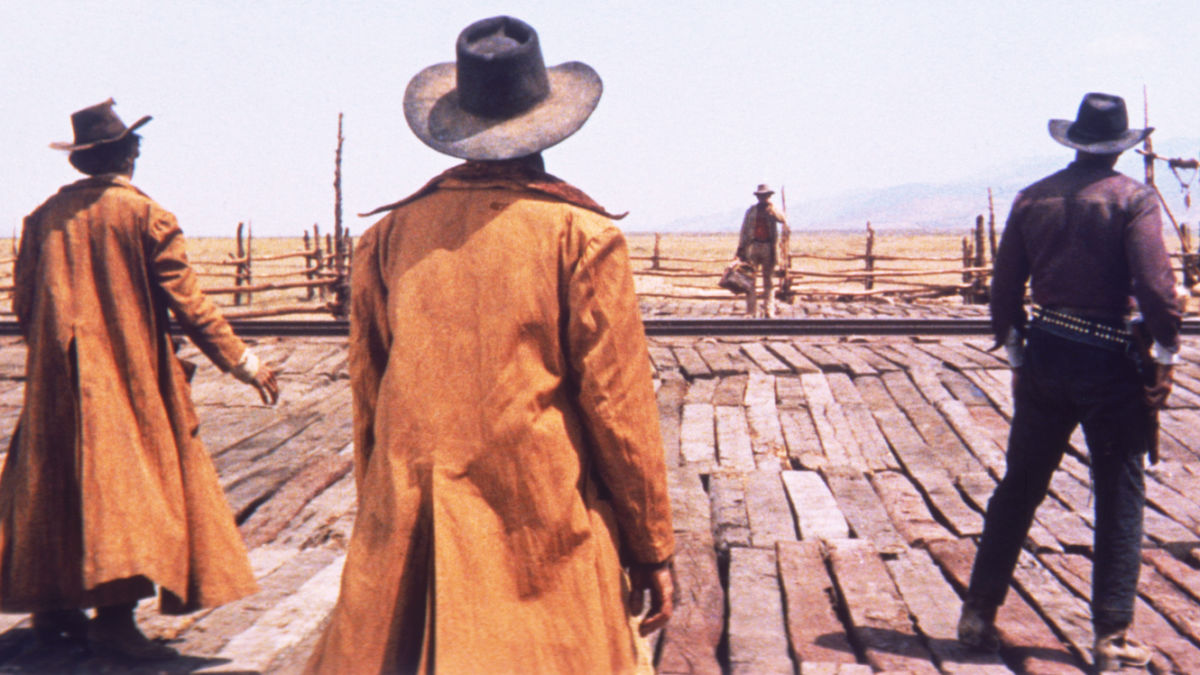 Following the success of The Good, the Bad, and the Ugly (1966), Paramount Pictures offered Sergio Leone a larger budget to shoot what many believe to be his magnum opus, Once Upon a Time in the West (1968). He even secured the star he wanted, Henry Fonda, to play the sadistic Frank. According to film historian and Leone biographer Christopher Frayling, Fonda—who had played numerous heroes in westerns, including lawman Wyatt Earp in John Ford’s My Darling Clementine (1946)—arrived on set with colored contacts and a beard; upon seeing his star, Leone ordered him to remove the facial hair and the contacts to reveal his distinct blue eyes. He wanted to surprise the audience when the camera circled around to reveal Fonda as the cold-blooded killer of the McBain family.

Upon release, the film received mixed reviews. Roger Ebert, who was a fan of Leone’s previous film, gave OUATITW two-and-a-half out of four stars. Whereas the visual style and pacing was welcomed in The Good, the Bad, and the Ugly, Ebert wrote that with his latest offering, Leone couldn’t seem to know when to quit. However, Ebert did commend Leone’s decision to cast actors against type and the scope he was able to achieve with a larger budget: “There’s a wealth of detail, a lot of extras, elaborate sets. There’s a sense of the life of the West going on all around the action (and that sense is impossible to obtain on small budgets).”

Since then, the film has been reassessed by film critics and scholars as one of the greatest westerns of all time. OUATITW was one of 25 films selected by the Library of Congress to be preserved in the United States National Film Registry in 2009. Leone’s sprawling, 165-minute distillation of the western mythos recently celebrated its 50th anniversary in December. While it has alternately been described as an epic and a “horse opera,” it may be more apt to view OUATITW as a “novelistic western”—a description that the influential film critic and theorist André Bazin (1918–1958) used to categorize what he deemed as the most accomplished traditional westerns and the evolving “superwesterns” being released in post-WWII America. Although Bazin passed away prior to the wave of Italian westerns that flooding the box office from the mid-1960s to the 1970s, I would argue that OUATITW would fit his criteria for this new style of western.

The notion of grading—what separates a B-list picture from an A-list picture?—is one of Bazin’s concerns when he considers low-budget genre fare. He writes:

It is in the “lower” layers whose economic fertility has not diminished that the traditional western has continued to take root. Superwestern or no superwestern, we are never without the B-western that does not attempt to find refuge in intellectual or aesthetic alibis. Indeed, maybe the notion of the B-film is open to dispute since everything depends on how far up the scale you put the letter A. The productions I am talking about are frankly commercial, probably fairly costly, relying for their acceptance only on the reputation of their leading man and a solid story without any intellectual ambitions.

To return to Ebert, the late film critic re-evaluated Leone’s GBU in his Great Movies column, pondering why he didn’t initially give the film a four star rating—“perhaps because it was a ‘spaghetti Western’ and so could not be art. But art it is, summoned out of the imagination of Leone and painted on the wide screen so vividly that we forget what marginal productions these films were.”

But with OUATITW, Leone solidified his artistic approach to the genre with its use of character development, its style and pacing, musical score, and intertextual relationship with its genre counterparts in relation to its overall scope.

The characters in OUATITW align with some of those who commonly appear in films of the genre: the prostitute with a heart of gold, the mysterious stranger, the hired gun, the outlaw, and the railroad baron. Not diverting from the western’s main cast of characters is essential in Bazin’s view, but they are allowed to have an emotional and psychological complexity. Representing a departure from the characters in Leone’s Dollars trilogy, the majority of characters in OUATITW develop full character arcs over the course of the narrative.

In addition, as Leone and film composer Ennio Morricone began in GBU, each character is represented by a musical theme. For this film, the themes are built of the construction of leitmotifs, but complete with instrumentation both common to and anachronistic of the time period of the 1880s. Arrangements include orchestral strings, glockenspiel, harpsichord, wordless vocals, dissonant harmonica, and electric guitar. Furthermore, the character leitmotifs intertwines as the narrative proceeds and characters interact. For example, the harmonica that represents Charles Bronsons’s unnamed stranger mingles with the electric guitar that embodies Henry Fonda’s Frank character since he is seeking revenge against Frank for the murder of his brother.

Jason Robards’ Cheyenne, in comparison, is represented by a jangling banjo, which fits the comedic elements of his character. The theme has a loping rhythm, almost resembling a horse taking long strides. Ocassionally, the final musical phrase is halted, allowing space for Cheyenne’s comedic lines to hit their mark before the last chord lands.

The sweeping score for Jill McBain also doubles for the film’s main theme. Its melancholy, soaring qualities have drawn comparisons to opera by musicologists and film critics. This distinction is important, given how the film mythologizes the West in an grandiose manner through Leone’s trademark style and pacing. Because of this, John Fawell, Christopher Frayling, and others have noted that OUATITW is often referred to as a horse opera, or alternately an opera of violence.

Ennio Morricone composed the score prior to when the film began shooting. On set, Leone would play the recorded music and have the actors move in time to the rhythm of the themes, which fit perfectly with his measured shooting style. According to John Fawell in The Art of Sergio Leone’s Once Upon a Time in the West, “his celebrated mise-en-scène, characterized by careful choreography, set in precise rhythm with the music, captured in elegant pans and tracking shots which themselves move to the music . . . Even the massacre of the McBains is choreographed with such patience and gravity as to take on a sacred quality.”

This operatic quality—complete with arias not sung, but communicated with stares and minimal dialogue—may be one reason in which the film achieves its iconic status. This raises the questions on what constitutes a B-film and raises it to an A-film, as Bazin and Ebert wondered. This isn’t to say that OUATITW is not a B-film. It retains its genre roots not only by the narrative it possesses—a widow is protected by an outlaw and a stranger from a railroad baron’s plot to steal her husband’s land—and tropes it adheres to, but also in the manner in which it intertextually references other westerns. For example, Leone references two alleged superwesterns that Bazin mentions in his essay. The McBain massacre nearly replicates the killing of a family in George Stevens’ seminal Shane (1953), while the unnamed gunslinger who plays an instrument is reminiscent of Nicholas Ray’s Johnny Guitar (1954).

Granted, the film is not without its faults. While the main characters are fully-fledged, secondary ones may come across as one-dimensional. Secondly, the recycling of plot elements does not make the narrative wholly original; rather, the storytelling through Leone’s elegiac camera movement does. The slow unraveling of events, combined with the score, can appear melodramatic and stretch the usually lean western into an extended affair for some viewers—something that would be more suitable for a novel than a feature film. However, the film’s strengths seem to outweigh any perceived shortcomings and elevate it to A-list status.

According to Bazin, “I say freely of the westerns I have yet to name—the best in my view—that they are ‘novelistic.’ By this I mean that without departing from the traditional themes they enrich them from within by the originality of their characters, their psychological flavor, an engaging individuality, which is what we expect from the hero of a novel.” Given the qualities of OUATITW—including fully-developed character arcs, a methodical pace, and a score that invokes the scope of an opera—it would be fair to assume that Bazin may have appreciated Leone’s magnum opus.