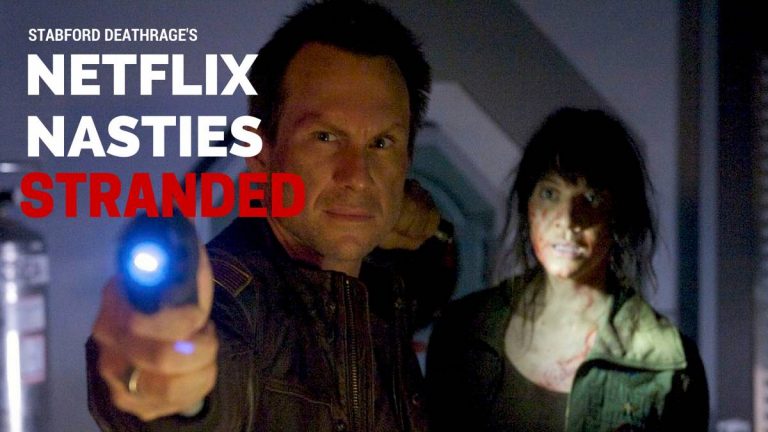 Astronauts working on a lunar base during a meteor storm encounter a strange infectious disease that results in a script reminiscent of Alien in this derivative sci-fi horror film.

A crew becomes stranded on the moon after a meteor storm destroys their miniature lunar base. Investigating a carbon monoxide leak due to a destroyed filtration unit, they discover a chunk of the meteor contains a spore, and then the lone female character takes a shower. The doctor recommends that if anyone starts hallucinating that they should see a doctor, and to drive the point home he says it a couple of times, which normally would be sound medical advice but in this context comes off as a cheap plot device.

Suddenly, the spore grows into a pukey-looking glob of spores. While examining it, the female character cuts her finger, and spreads blood around the lab in a not-especially science-y manner. Then someone claims the spores are smart.

In a surprising twist if you’ve been living under a spore-covered meteor, the lone female scientist inexplicably becomes pregnant, and Christian Slater tells the crew to throw a blanket over her. I’m not sure why.

She has a dream she’s giving gooey, sweaty, zitty birth, then she gives actual gooey, sweaty, zitty birth. Then someone flips Christian Slater the bird. The female scientist wakes to find she’s nursing a gooey, nude, bitey, nearly-fully-grown human-hybrid. It bites the creepiest character, then no one believes it due to the all the carbon monoxide, the terrible script, and the fact that he’s creepy. Then everyone seems to abandon scientific protocol, knowledge of basic anatomy, and safety quarantine practices because why not.

The doctor checks the female’s stomach fluid to see if the monster running loose in the lunar base might have been a fibrous cyst that could possibly have burst. I’m not sure what that means.

Meanwhile, the characters fix solar panels, chug hooch, and unconvincingly swallow pills. The cyst runs amok, makes a mess in the kitchen by devouring all their snacks, and molts. Then the creepiest character runs nude on a treadmill while covered in aspic. Christian Slater is placed under observation because he’s on strong antibiotics, and I’m not sure what that means.

Suddenly, there’s a pretty gory scene involving a broken mirror, which is pretty cool for a moment, and not a moment too soon. Meanwhile, the monster’s neck pulsates and looks like a bullfrog crossed with the Greatest American Hero.