If it's complete carnage and little else you want, Extraction delivers with its uncompromising bloodshed.

Indonesia has been the best thing to happen to Hollywood action movies over the last ten years. Inspired by the likes of The Raid, heavy hitters in the west have taken a fancying to brutal killing in grimy settings, long takes of violence, and rocket-propelled narratives that don’t mess around. Extraction is the latest brutalise ’em up to owe a debt to Indonesia’s skull-crushing output with a flawed but undeniably fun end product.

Chris Hemsworth plays Tyler Rake, who must be mates with George Cauldron, as he looks to save a gangster’s son in Bangladesh. That’s it. That’s all there is to know. Unless I missed something between the gunshots, Extraction doesn’t even waste time explaining what organisation Tyler is a part of, it barely lingering on any plot details or characterisation for more than the amount of time it takes to reload a gun.

But if it’s abhorrent violence and creative kills you’re here for, oh boy does Extraction deliver. I thought I had become jaded by the many, many horror movies I’ve watched over the years, but the fights in Extraction are so ferocious that I found myself exclaiming at the screen with almost every setpiece.

Extraction really doesn’t give its audience much chance to breathe, it basically being like Fury Road on foot. Setpiece after setpiece flies by, whether it’s Tyler making his way through an apartment complex or a superb showdown on a bridge, Extraction’s action always excites. There’s even a scene where Tyler and his nemesis exchange vehicular blows in an almost hilarious fashion, yet both stand up and walk away. It’s all very absurd but still absolutely marvellous.

Whether he’s kicking the knees off of children (they deserve it, don’t worry) or using a soldier as a baseball bat, Tyler Rake does not mess around. Imagine John Wick with an especially rough edge, someone whose ghosts haunt him to an even more sociopathic extent. Extraction doesn’t really dwell on Tyler’s past of how he came to be a killing machine (most of the characterisation is actually in the trailer), though there is a surprising admission from him late on that gives his character more depth. I just wish there was more of that, the action then skipping along to the next throat punch without really dwelling.

Extraction also really begins to crumble when you think about it for any time at all, it filled with a lot of contrivances that don’t add up. The big bad has so much sway that he is able to lock-down (shudder) an entire city, and Tyler’s destruction of the armed government forces coming after him doesn’t seem to cause him any ethical concern. Usually these guys just get a broken wrist and a big slap on the backside, but here they’re getting filled with lead like nobody’s business.

While the action is, by and large, sensational, the CGI can be spotty at a few points, especially when there are any helicopters as they seem to have a plasticky sheen to them. As well as that, some of the hidden cuts during “one-take” sequences are clearly the result of post-production, which really took me out of the action at a few points. Objects and people obscuring the lens are much more effective than simply blurring the focus while quickly panning to a wall and then back, though I was still back into the fray and invested before long.

If it’s complete carnage and little else you want, Extraction delivers with its uncompromising bloodshed. Just don’t think about if for any longer than Tyler Rake needs to clear a room of very bad men. 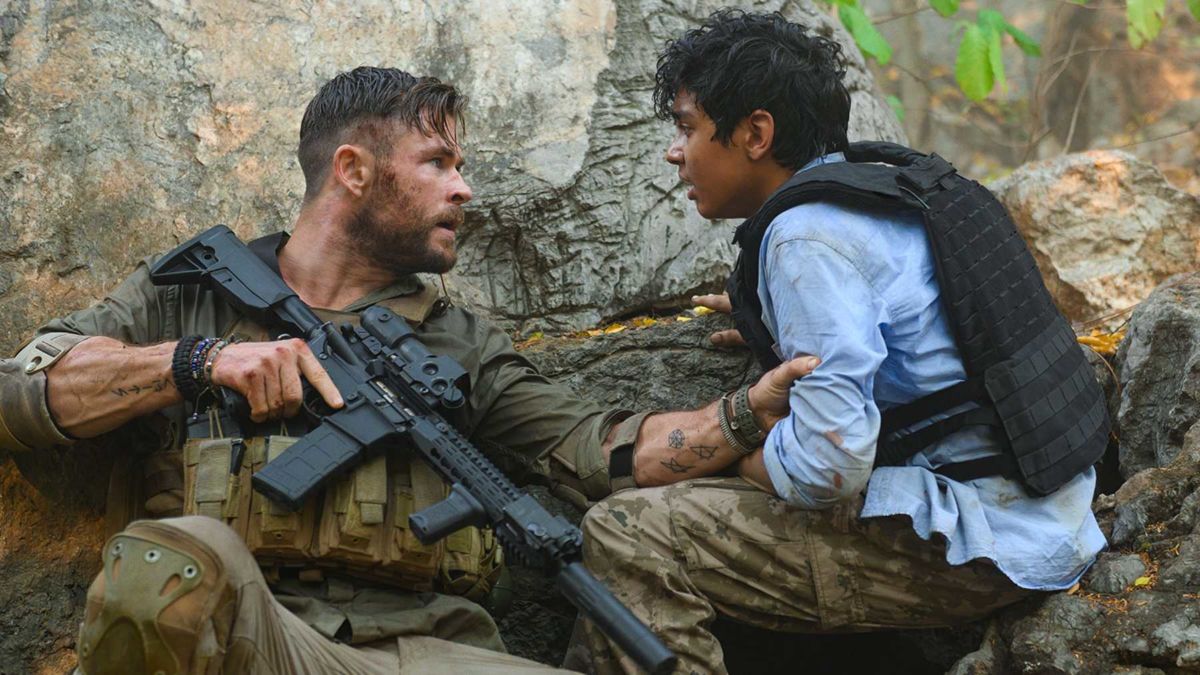 Verdict
Chris Hemsworth shines in this dumb as bricks slice of escapism that makes John Wick's action look PG by comparison.
7
Cultured Vultures is a pop culture website established in 2013 covering all things gaming, movies, and more. We eat your words.
All The News On The Biggest Games