Neighbours back From Hell (PS4) REVIEW – Menace To Society

That lower-case b is really frustrating. 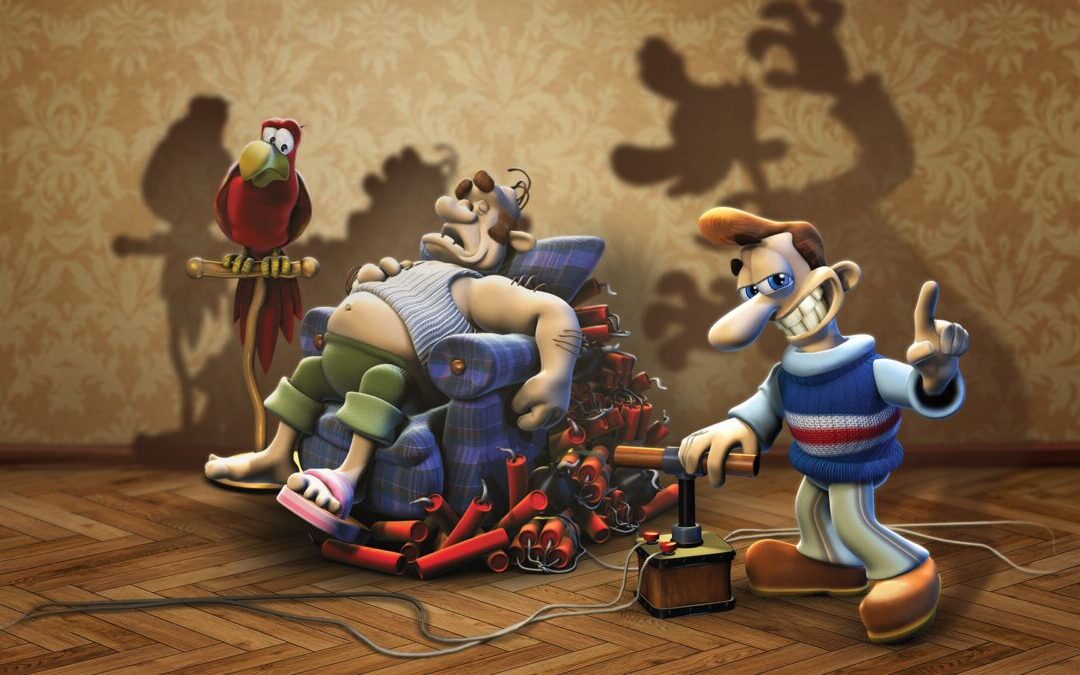 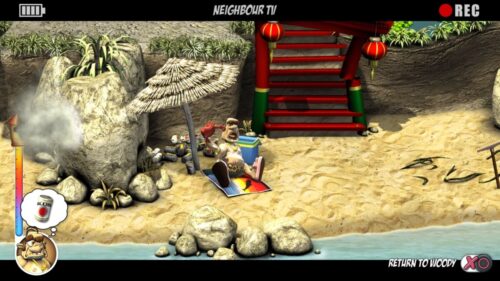 Neighbours back From Hell was a rare breed of remaster that had me thinking on more than one occasion “who really needed this?”. For those equally baffled, this is a HD port of 2003’s Neighbours From Hell 1 & 2, which was released for PC and Nintendo Gamecube and now has a cult reputation on places like YouTube. I want to apologize to anyone with fond memories of these games. As a puzzle game, it does its job well, but my playthrough didn’t fill me with the confidence that it was made as a labour of love, more a quick cash grab by HandyGames.

You play as Woody, who is more than a little perturbed that his neighbours, the Rottweiler family, are making his life a misery by being general nuisances. Rather than using the proper channels and authorities to evict his neighbours, Woody hires a TV production crew to film him on his quest to perform some dire and often harmful Beano style revenge pranks. As the game progresses, the Rottweilers get rightfully sick and tired of their persistent nightmare of a neighbour and end up going on holiday, only for Woody to show up and ruin that too. Weirdly, you end up feeling sorry for the Rottweiler family after a while.

While I wasn’t exactly expecting a well-crafted tale of two warring neighbours who can understand and eventually grow to love each other, I was expecting a little more in general. A bit of backstory? Some amusing follow-up cutscenes or comic panels between each level or series? There are a few design ideas that could have been walked down and explored. I could dive down a rabbit hole that perhaps you’re the neighbour from hell, in some stoner meta conspiracy theory. Such conspiracies dare not be humoured.

Neighbours back From Hell’s visual presentation is horrible, especially so many years from its initial release. It’s clear that the characters are heavily inspired by Aardman Studios and while I love a good Aardman movie from time to time, the animation made me feel ill before long. I don’t quite understand why the character models move so awkwardly around the levels. Perhaps it was meant to mimic stop-motion animation? That would have been fine if they made the whole game look like we were playing in a plasticine style world. We don’t get that. Instead, they’re just some janky animations that look like they’re going to bottom out to the lowest of framerates.

Over the collection’s 25 levels, you are taken to one of 3 locations: the Rottweiler’s residence, a cruise ship and, let’s say, a “holiday level”. The holiday level is the same look in principle but has different setpieces to define its identity, whether that is China, India or a Hollywood movie set. Players can expect a stealth puzzle adventure, taken from other retro classics such as Spy vs. Spy or SEGA’s The Bonanza Brothers. Each level has a certain amount of gold medals to collect via successful use of pranks; some levels range from a minimum of 4 to a maximum of 10 gold medals to collect.

There are 6 levels or “episodes” per “series” in a tie-in to the game’s TV production backdrop. To unlock other series, you need to capture a set amount of the previously mentioned gold medals — you could just collect the bare minimum of medals of each level and walk away. However, there were quite a few instances where I couldn’t leave the levels because the button prompt failed to materialize. The only way I could get out of the level was to grit my teeth and wade through one monotonous prank after another.

Each level requires you to sneak around a total of 4 – 6 rooms to find various methods of mayhem. These can range from the typical pranks, such as pins on your chair and whoopie cushions, to the more elaborate schemes, such as swapping around toilet signs or placing fish in plants to make them smell bad. None of these pranks are fun, but rather disappointing and forgettable. Should you get caught by either Mr or Mrs Rottweiler, you’ll get smacked into another room and lose a life. You have 3 lives in total, but honestly, you can either reset the level if you care about your score that much or just carry on as normal. It’s nearly impossible to lose all 3 lives.

Metal Gear Solid veterans might appreciate strategically sneaking around Neighbours back From Hell’s enemy patterns. At the corner of the screen, there will be the thought bubbles of Mr Rottweiler and eventually his wife that will tell you what they’re doing. It’s easy to understand where they will go and they rarely deviate from their routes, so you can plan which rooms to set up and when. It’s pretty easy to set up a combination of pranks for an unsuspecting Mr Rottweiler, hide somewhere and rack up the gold medals that way. It’s also the only satisfying way to play and helps you create your own entertainment.

The novelty to this style of gameplay wears off quickly, though. There’s no real sense of risk or reward and it makes Neighbours back From Hell a barebones experience. Considering it took around 6 hours to play from start to finish, it felt much longer. When a level is cleared, you get given a high score then it’s off to the level select screen you go. You are not awarded for anything, except for a handful of very generous trophies, which would be the only incentive to keep playing through.

I’ll give Neighbours back From Hell this one token of credit: the levels have a noticeable difficulty curve as you progress. Some levels will be littered with various distractions that can throw you off and catch you out if you aren’t careful. For example, the family pets will call Mr Rottweiler’s attention if you make too much noise, who you can easily retreat from with little trouble so long as there’s a good hiding spot. There is also Mrs Rottweiler, who will do her own activities, such as sleeping or holding her breath underwater, and you have to use that time to make a sweep of her room. It’s a small mercy, but I’ll take the difficulty curve. Even with all that in place, it’s still not the most mentally taxing game to play.

I did not like Neighbours back From Hell for several reasons, from the janky animation to its dated gameplay. While it wasn’t the worst game I have ever played, the tedium and minuscule variety made this collection a chore to get through. If you happen to have some warm, nostalgic fuzzies over the originals, you’ll likely enjoy dropping £15 for that sweet slice of throwback pie. Other than that, it’s hard to recommend Neighbours back From Hell to anyone except avid trophy hunters.

A copy of Neighbours back From Hell was provided by PR. 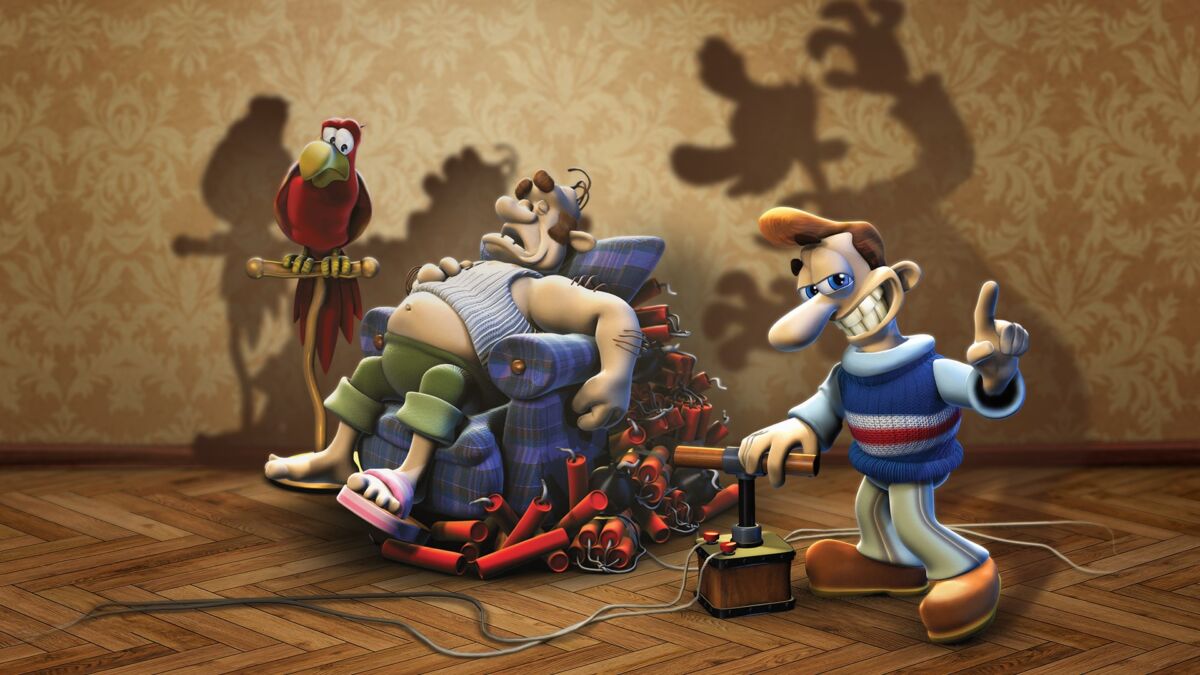 Verdict
Neighbours back From Hell has very little in the way of replayability, variety and overall imagination. While this may be a miserable experience for new players, some fans of the original might love it for what it is.
4
Cultured Vultures is a pop culture website established in 2013 covering all things gaming, movies, and more. We eat your words.
All The News On The Biggest Games