Monster Party (2018) REVIEW – We Probably Should Eat The Rich 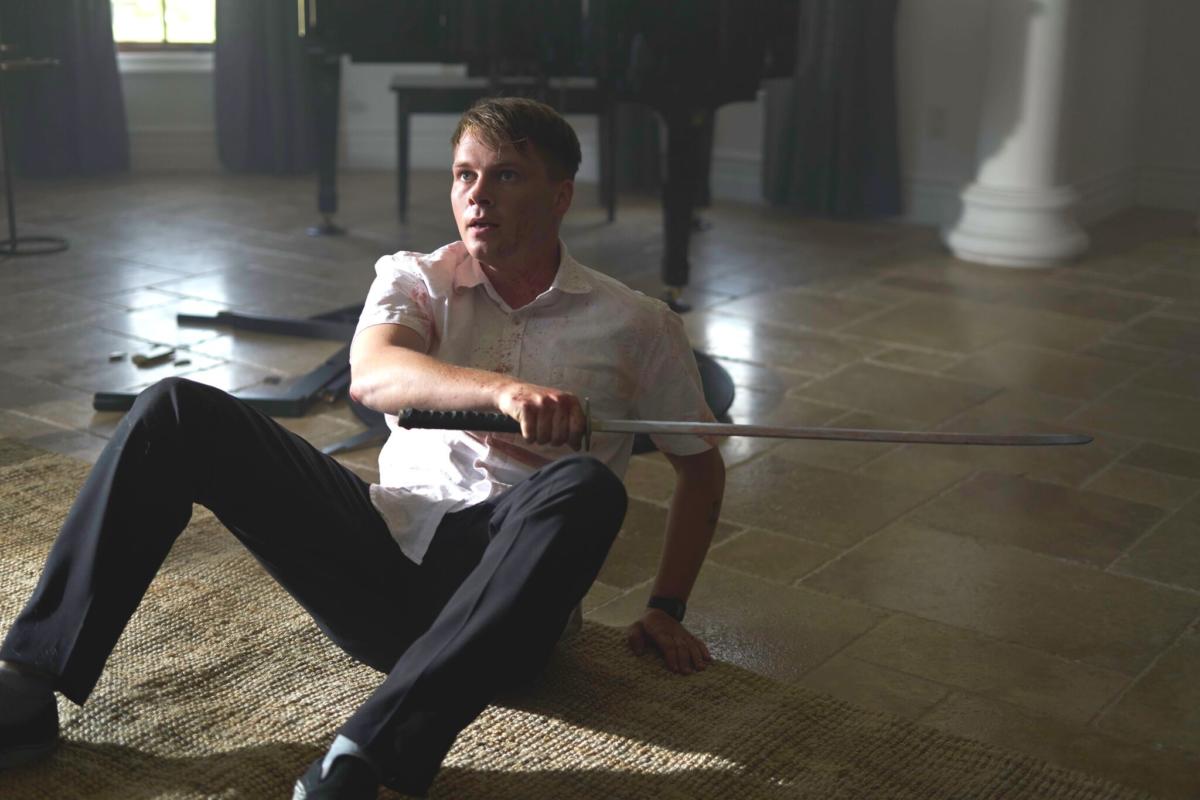 I really dig Monster Party’s aesthetic. It’s comic but not cartoonish, and it’s realistic enough to get us to sympathize with the protagonists. And yet it also has a neat dreamlike quality to it. Even though it’s so wonderfully stylized, director Chris von Hoffmann doesn’t let anything get in the way of the story.

Three young people in their early 20s are about to attempt a robbery that they’re not going to forget — that is, if they even make it out alive. Casper (Sam Strike), Iris (Virginia Gardner), and Dodge (Brandon Michael Hall) are small time thieves who are usually meticulous in their planning. However, when Iris gets a gig waitressing a private party held at the mansion of a very rich family and their friends, the group decides it’s worth the risk. Casper needs $10,000 in 24 hours or his father, who has already had a finger chopped off, will be killed by his bookie. Iris is pregnant with Dodge’s baby and the two want to get out of town and start a new life. Well, as you can probably guess from the premise, things go very, very wrong for these young folks. The rich folks are a bit bloodthirsty.

So, yeah, if you’ve seen the trailer, or even the poster, you know the basic plot going in. But that doesn’t matter so much because it’s in the particulars, the details, where the movie is most effective. You might think you know what’s coming next, but there are plenty of surprises in store.

At first it seems a bit odd that the protagonists are a bunch of dope smoking thieves, but von Hoffmann gets us to sympathize with them almost right away. Here, the rich and the middle class are so crass that these kids look noble in comparison. The trio aren’t the “good guys,” exactly, but they’re the more ethical, moral group, and by a large margin.

While Monster Party is mostly a story about violence between economic classes, racism is addressed too. When a group of white kids corner the African American Dodge and interrogate him about his relationship with Iris, his white girlfriend, we can’t help but feel more than a little uncomfortable. A black guy in serious danger of being harmed by a mob of white boys certainly, and unfortunately, resonates in the strange political climate of America in 2018.

The violence in the movie is graphic, and the blood flows as if from a faucet, but it takes a while to get there. There’s a bit of gore near the beginning of the film, when Casper’s father loses his finger, but we’re almost 45 minutes into the movie before the shit really hits the fan. And when the brutality starts, it is relentless.

The cast is quite good, very often superb. Veteran character actors like Robin Tunney, Lance Reddick, and Julian McMahon round out a great ensemble cast. Reddick, probably best known as Charon, the hotel manager in the John Wick movies, provides much of the same class and sophistication as he does in those films.

Goddamn, I love this deranged world that Chris von Hoffmann has created. It’s crazy, violent, a bit shocking, and a lot of fun. This is a sleeper indie horror / thriller that’s well worth checking out.