How does one become a composer of film and TV? For Kurt Oldman, he knew from a young age that he would always end up in the music business, especially with a great-grandfather who was a conductor and grandfather who was a pianist on top of supportive parents to guide him along the way. Even though he was far from Hollywood, he was born and raised in Switzerland, he still found ways to stay connected and nurture his craft.

He studied at the Conservatory and later on at the Swiss Jazz School. Upon completing school, he got the opportunity to score a two-hour long bio pic and after that knew if he wanted to get serious about the business he would have to move to LA. Months later he did and attended the UCLA film scoring program studying with composer Christopher Young, whose earlier score to Hellbound: Hellraiser 2 first inspired him to explore writing for films. Even though it was a process, it was a worthwhile one for Kurt.

After being in the business for almost 20 years now and composing for every visual medium, Kurt is currently scoring Crackle’s stop-motion animated television series, SuperMansion. For a show to become a hit all the different pieces have to fit together perfectly, critics would agree that SuperMansion is one of those circumstances. One of those pieces being Kurt’s alluring score that nicely compliments the show’s emotion from week to week, whether it be action packed or comedic. We talk with Kurt in more detail about his work below.

Was there one score for when you when you were younger that made you want to get into the business? Or was it just over time you realized?
My introduction to film music was Herrmann’s Vertigo and Goldsmith’s Planet of The Apes along with a lot of wonderfully composed European films from the fifties and sixties that my parents used to watch but it was actually Chris Young’s score to “Hellbound: Hellraiser 2” that made me explore writing for films. I remember watching this film as a horror buff thinking, “I had no idea you could write this kind of music for a film like this.” The score to this was like an epic homage to the entire Horror genre

Everyone in my family was involved in Music to a degree. My great-grandfather was a conductor and my grandfather a pianist. I was lucky enough to have my parents’ full support from when I was very little and they allowed me to study at the Conservatory and later on at the Swiss Jazz School. With my musical background and fascination for the movies, scoring films and TV seemed the natural path. Musically speaking, I find myself inspired by visual elements and the collaborative approach the industry provides.

It was back home in Switzerland right after I finished college, when I got the chance to score my first film. This really was the foundation for where I was heading later. It was a two-hour long bio pic with what I thought at the time was a surprising amount of music. I had no idea how it was done and I had to figure it all out as I went along. It turned out great and was an invaluable experience. After that it was pretty clear to me that composing was going to be my path.

In the last three seasons that you have been scoring SuperMansion, which episode has been the hardest to score? Why?
Animation in general can be challenging because you are scoring to animated storyboards quite a bit. While the voices are recorded very early on and cut into the animatics, there is a lot that you can miss as a composer especially on action sequences. You really have to fill in the gaps a little in your head when you’re working that way. On the upside, I think it can also free you up to approach a scene in a way you may otherwise not. It allows you to not get so focused accommodating all these hitpoints—and there are a lot in animation—but focus on the natural flow of the music. You’d be surprised how much things can fall into place when you get that right. 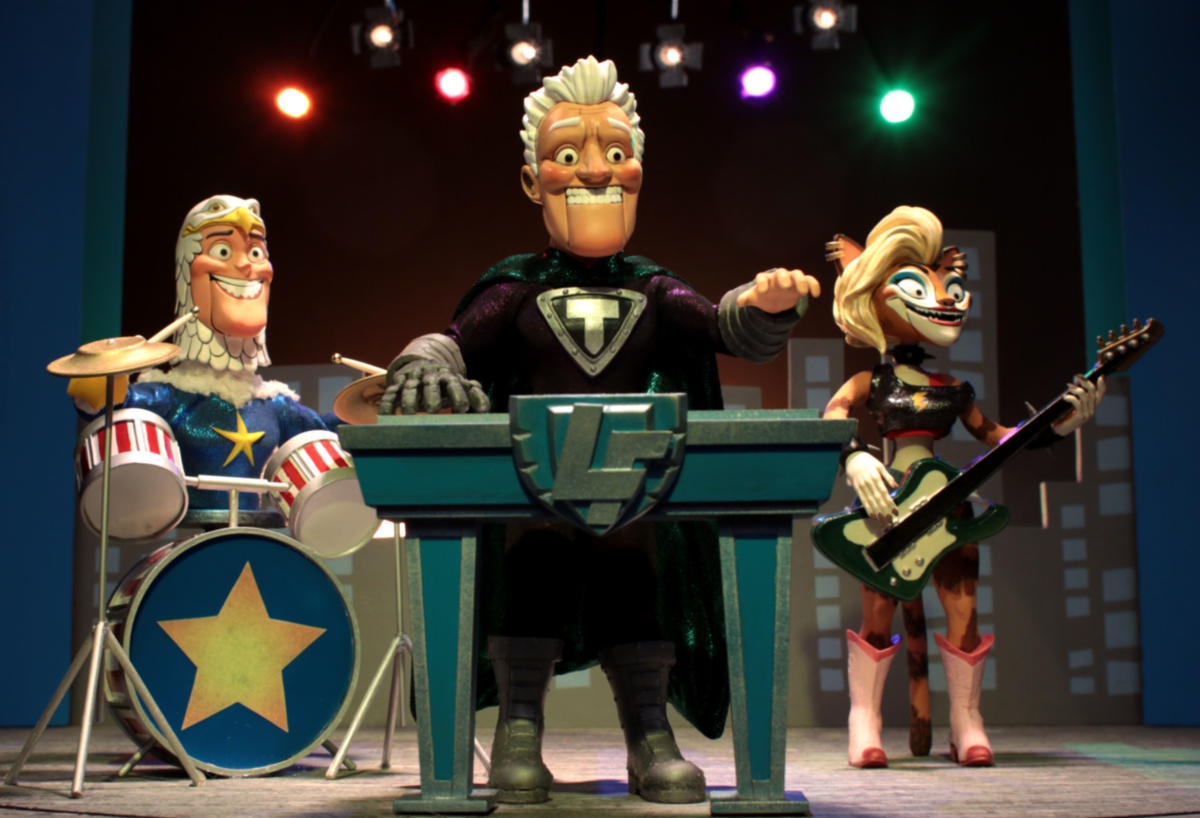 You describe your style as hybrid orchestral. Could you elaborate on this a little?
A lot of my contributions to the Superhero genre and Trailer Music world have been hybrid orchestral, a mixture of a conventional orchestral pallet with a lot of electronic synth and drum elements. Even orchestral/industrial at times. I love the full range of the orchestra but always look to experiment and mix sounds to keep it fresh if the project allows it. Although my main influences in my orchestral scoring have been Mahler, Tchaikovsky and the Straus and Sibelius tone poems, I’m always discovering new music and artists and try to never stop evolving. I’ve always been like that.

How do you generate ideas for SuperMansion episodes? I mean, is there a set of rules you tend to follow?
The animation and actors, in combination with the spotting session guide much of the direction. By the time I’ve discussed the episode, beat-by-beat with the Zeb and the director, I have a pretty solid road map for the emotional, action, dramatic and comedic beats. I know I’m working with a full orchestral Action/Adventure pallet, so from there I can pretty much go wild. Zeb is open to creative and crazy ideas and has allowed me to push things a little further. In fact, he lets me cross the line without being worried of going too far.

Sometimes, for the ‘Special’ Episodes, we change up the musical palette completely. In the Summer Special that just aired, the score is actually very much retro influenced. We wanted to make it like our favorite shows we grew up with: Hawaii Five-0, The A-Team, and The Brady Bunch. I absolutely love TV scores from the 70’s and 80’s. We ended up with lots of bowed Vibraphone, Percussion and a smaller String Section than we usually use. We also recorded a Drum Kit in mono with a single microphone to get the right sound.

In what ways does SuperMansion push you musically?
The nature and expectation of the Superhero genre can dictate the musical scope and therefore the size of the orchestrations to a degree. While orchestration is part of my composition process on this show, it can be time consuming to produce these elaborate epic action and battle cues that have hundreds and hundreds of audio tracks.

Working in TV has really helped me fine-tune my entire workflow. From spotting session notes over the demos approval process to final delivery of music edited masters. It’s been an invaluable experience.

In a few words how would you describe your score to SuperMansion?
Action adventure music with a lot of nods to the Superhero genre.

In Season 4, are you planning to make any musical changes?
While the musical direction of the show is pretty well established now, I always try to push things further. SuperMansion is the perfect show to try out crazy ideas and most of the time the show runners are game. I’m sure we’ll continue elaborating on our character themes. The first character theme I remember writing was the ‘Mange’ theme, for Black Saturn’s alter ego. Zeb and I talked about themes quite a bit before we started Season 2 and I ended up writing thematic suites before we actually started scoring to picture.

My favorite and possibly the most used in Season 2 was the heroic ‘Zenith’ theme. It usually comes in when she’s transforming and in some select fight sequenced. It was interesting because we needed it to be heroic and at the same time be versatile enough to be turned into more tender and emotional versions for moments with her in the later part of Season 2. I ended up writing it in Dorian, which was unusual considering the main purpose it had to serve, but it proved very useful.

How closely does the content that you tend to compose for mirror the content that you tend to consume?
During my downtime, I always seem to listen to what is the furthest thing removed from what I’m working on right now. My current playlist contains the ‘Blood’ album from ‘In This Moment’, the bands ‘Hollywood Undead’, ‘The Pretty Reckless’ and a song called ‘Number One’ by ‘Chaz Jankel’ from the film Real Genius…

Thanks to the Shazam app on my phone, I find I’m discovering a lot of great artists all the time now. Even so, I keep going back to my favorite bands and artists growing up: Pink Floyd and Peter Gabriel. I also started listening to a lot of ‘Mahler’ Symphonies, Ligeti and Arvo Part again the last couple month.

You’ve worked on SuperMansion for so long now, you must enjoy the entertainment factor of the show. Do you have a favorite character?
I really love that I can go all the way on this show. I don’t have to tip-toe around. It’s not terribly subtle music of course. I’m always amazed as to how much material the writers can jam into twenties minutes. On each episode, I’m usually running the gamut of emotions from action, to horror, romance and comedy. That keeps me on my toes.

I really love writing the songs as well. With some of the lyrics that the writers come up with, I find myself having a double-take and going, “Are they really saying that?” The idea of taking goofy and playing it straight can be pretty hilarious. So, to be at work and finding myself laughing out loud is certainly a plus.

I had a soft spot for Dr. Devizo from the very beginning. I developed thematic material over the course of two episodes when I came on board at the of of Season 1 and have elaborated on these basic couple ideas ever since.