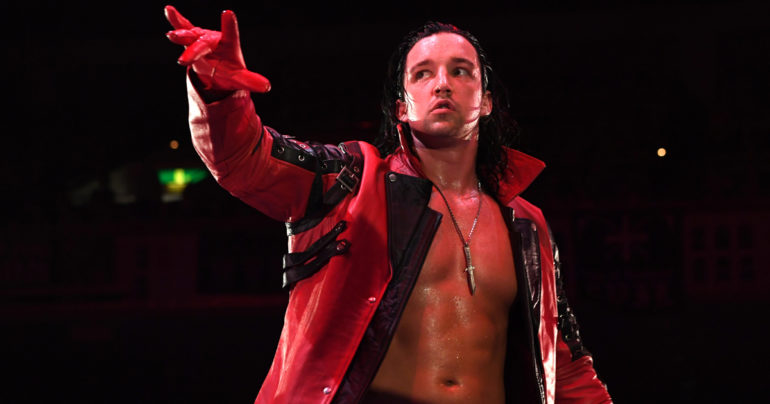 Jay White defeated Kota Ibushi for the right to challenge for the Intercontinental and IWGP Heavyweight Championship at the upcoming WrestleKingdom 15. He will face either of the men that he challenged last year at WrestleKindom; Kota Ibushi or current champion Tetsuya Naito. Jay White has been a main event player since debuting the “Switchblade” persona back in 2017. He’s been pushed extremely hard with wins over all of New Japan’s top stars and becoming the leader of the Bullet Club. So why is he so divided amongst fans?

I remember being in the crowd at WrestleKingdom 12, it was the first time being at the Tokyo Dome. The show had an incredible undercard main-evented by Kenny Omega Vs. Chris Jericho and Kazuchika Okada Vs. Tetsuya Naito. However one match stuck out, Hiroshi Tanahashi was facing off with “Switchblade” Jay White. Who was this guy?

Promo videos of a long-haired greasy guy playing with a knife. So that answered the switchblade part, but he didn’t really justify being in such a high profile match. But it’s New Japan so he must be great, right? Unfortunately not. An awkward-looking guy in a leather coat walks down to the ring to silence. It was the least memorable match from the show and a terrible first outing for Jay White. Yet, New Japan continued the push of White and he quickly took the United States Title from Kenny Omega.

He clearly wasn’t quite at the level of the top New Japan stars, but some excellent matches with Adam Page and Juice Robinson showed he was growing into his role. In a few short months, the awkwardness had been swept away with a brash cocky swagger, heelish tactics, and just a general presence surrounded him. He wasn’t (and still isn’t) flashy in the ring, but he played his character perfectly.

Jay White took this character to the next level when he became the leader of the Bullet Club. In a shocking twist Jay White and Kazuchika Okada’s manager, Gedo, defected from CHAOS to join the Bullet Club. This amplified the heelish actions for Jay, now having a whole stable to run interference and the annoying Gedo at ringside.

This propelled Jay White into the main event scene, defeating Okada at WrestleKindom 13 and then defeating Hiroshi Tanahashi for the IWGP Heavyweight title a couple of months later. Jay White then main-evented the historic New Japan/Ring of Honor show in Madison Square Garden. Even though he dropped the title to Okada, his main-event status was cemented.

But Jay White remains controversial amongst fans. The interference, time-wasting, and general skullduggery are seen as a detriment to New Japan’s pure style of wrestling. His matches can feel formulaic, even the great match he just had against Kota Ibushi started off with five minutes of time-wasting and Gedo interference. His less-than-flashy style stands out against some of the best wrestlers in the world like Will Ospreay or Shingo Takagi.

In just a few short years he’s progressed through the company far quicker than almost any other wrestler. His only WrestleKingdom opponents have been the four biggest stars in New Japan: Tanahashi, Okada, Naito and Ibushi. He’s defeated everyone, been a G1 finalist, held the most prestigious belts and never fallen down the card. Compare that to the recent debuts of Master Wato and The Great O’Khan, two wrestlers who have been placed firmly at the bottom. The question a lot of people have is why this guy? Over Ospreay, Ishii, Takahashi, even Ibushi who has never held the IWGP Championship.

I think what makes Jay White stand out over other wrestlers in New Japan is his character and presence. Compare Jay White’s promo ability with Will Ospreay’s recent heel work. It’s like night and day. Will Ospreay – although he is a fantastic wrestler and will probably grow into the role – is a very hammy performer and feels like a character. Jay White always delivers natural, entertaining promos, whether they’re in the ring, post-match or even as he comes up the ramp. His character is always on. Even when he first debuted as the Switchblade, after the awkward match with Tanahashi he had a great segment with Kenny Omega at New Year’s Dash the next day.

As for his ring work, it has improved tremendously over the past couple of years. He’s been comfortably having New-Japan main event style matches with the likes of Ibushi and Okada. He doesn’t just hang with them, he matches their performance level. I’m not going to argue that he’s as good in the ring as the top stars but his character work (that continues in his matches) more than makes up for it, and provides a foil for New Japan’s top babyfaces. The reaction he gets from the crowd (in normal circumstances) shows that his work is effective, anecdotally I see a lot more Jay White shirts in Tokyo than I did the previous year.

The main criticism of Jay White’s style are fair. It’s something that I’ve grown tired of as well and I think it does a disservice to White as a performer. He’s good at slowing matches down and drawing heat on himself, but it usually relies on his opponent being a dumb babyface to be effective. With the emergence of EVIL as another top star in The Bullet Club, I think a lot of the interference can be left out of Jay White’s matches.

The inevitable face turn will be the true test of his work, can he be a main event player without the bells and whistles? I think we’ll see a far smoother wrestler and a more traditional New Japan style from him, but hopefully, he can still keep the characteristics that got him to this level. At just twenty-eight years old, White represents new blood into the main-event scene. Tanahashi has stepped away and both Naito and Ibushi are approaching forty. At such a young age Jay White is already a top performer and can potentially be as valuable as Okada has been to New Japan these past few years.

Just like last year, WrestleKingdom will be split into two days. Also just like last year, there are multiple people who can walk out with the IWGP and Intercontinental Championship. Kota Ibushi will challenge Tetsuya Naito on the first night, with the winner facing Jay White on night two.

I’ve spent this whole article justifying Jay White’s inclusion in the main event but should he actually win? Probably not, but not because of any of his weaknesses’. Naito’s reign and status in the company could go to the next level by winning back-to-back main events and there’s still a lot for him to do with the belts (a showdown with Sanada, another match with Okada, the promised match against Takahashi).

As for Ibushi, any situation where he doesn’t walk out with the titles will feel like another failure. He’s won the G1 twice in a row, but lost both his matches at the Tokyo Dome last year, and became the first person to lose the briefcase itself earlier this month to White. If Ibushi defeated Naito and had his first reign ended by White the next night, it could potentially seal a heel turn for him. But after such a long journey to the top belt, this would be unsatisfying.

As for White losing, it doesn’t harm his character too much. Everyone loses their first main event. Omega, Naito, Okada. All of them had to fall before they could rise. This could be the same for White, he loses the match, Bullet Club turns on him and his face-turn propels him to the title in 2022.

READ NEXT: G1 Climax: Was Kota Ibushi The Right Winner?