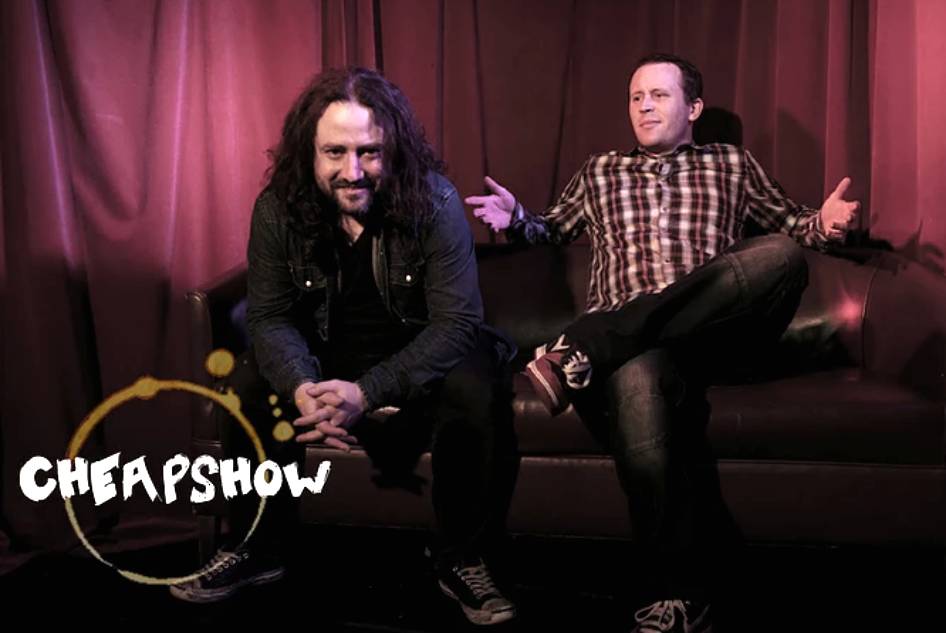 I don’t keep my love for podcasts too quiet–I’ve recently written passionate pieces on Marvel’s Wolverine: The Long Night, and The McElroy brothers’ Adventure Zone, and my social media feeds are full of love for things like Dungeons & Dragons’ Acquisitions Incorporated series, and Big Finish’s Doctor Who audio dramas. I also recently chatted with The Tick’s Griffin Newman, who is a co-host on the brilliantly insightful film podcast Blank Check with Griffin and David.

But despite my love of adventurous, narrative-based podcasts and shows where people talk about media I really enjoy, my genre tastes expand to “people doing funny things with no real rhyme or reason behind them”. It’s just really difficult for me to find comedy podcasts I actually enjoy.

Up until several months ago, the only two comedy podcasts I was listening to were Comedy Bang Bang and Spontaneanation, both of which were fuelled by a love for Scott Aukerman and Paul F Tompkins. (I’m also a long-time lover of My Brother, My Brother and Me, but at this point in my life, the McElroy brothers are their own genre of wholesome goodness.) While I adore the improvisational nature that a lot of podcasts have, too many comedy podcasts don’t personally work for me because they’re filled with personalities I don’t enjoy, or they’re too structurally loose to have much longevity to them. And then CheapShow came into my life.

CheapShow is one of those podcasts that’s quite odd to actually explain and promote to people, as so much of its charm hinges on the relationship between its co-hosts, Paul Gannon and Eli Silverman. It would be like trying to get a friend to watch Parks and Recreation by simply telling them “oh, it’s about the deputy director of the Parks and Recreation Department in a fictional Indiana town”, and not mentioning any of the characterisation that fuels the show’s emotion and humour. CheapShow is the same, I can describe it as many things: quintessentially British, hilariously crude, cry-laughingly silly…but it’s also one of those podcasts that you just have to sit down and listen to.

Co-host Paul Gannon recently chatted with us, and began by agreeing with the idea that CheapShow has some rather intangible qualities about it:

“CheapShow is an odd duck,” Gannon says, “it’s primarily a comedy podcast celebrating all the amazing/awful things you can find in a charity shop or a Poundland. We are trying to be a show that tries to prove that living on the cheap can be fun and fascinating… but what the podcast is probably more accurately about is two men who act like they’ve married for 30 years and have a tonne of resentment and anger to work through their system… but do so via the medium of podcast.”

CheapShow is unlike a lot of other podcasts, but it still has its own influences and inspirations. Eli and Paul devour a wide range of media, and can’t help but be influenced by what they’re listening to: “I personally was more influenced by Kevin Smith podcasts and especially Hollywood Babble-On, which we tried to kinda copy at the start (when the show was called “The Uncliqueables”… long story…) and then quickly ditched,” Gannon explains, “These days, I am obsessed with Last Podcast on the Left and The Dollop, but I listen to a load more (like Attaboy Clarence), but these shows tend to be very very different to what we do at CheapShow.”

Whilst CheapShow is a podcast that’s full of laughter and silliness, it hasn’t always been an easy journey for its co-hosts, with them trying out different comedic mediums before discovering podcasting worked best for them: “For me, podcasting is pure entertainment,” he explains, “…it’s unfiltered, uncensored and doesn’t have to pass through a bunch of producers [who are] out to change things to appease programme makers. Both Eli and I did stand-up for a long time and it just wasn’t for us. The demands and stresses of doing stand-up weren’t great for our mental health and, personally speaking, I found the stand-up circuit terrifying. I hated talking to other comedians, couldn’t do the schmoozing, hated writing material and frankly, the nights to perform at were getting worse and worse for less and less money. I did a solo show in Edinburgh and the whole experience was so traumatising and horrifying that I tried to take my life not too long afterwards. I’d never felt such a failure and so alone and I didn’t think I would ever do comedy again. It took me about 2 years to try and do something creative again and Eli and I teamed up to try this podcasting thing a go. I’d lost myself in many podcasts whilst I was going through a bunch of therapy and found them intimate and comforting and decided that maybe a podcast could be a way for me to do something in comedy. I thought, this way, I can create something that is pure “me” and [that] I don’t have to make it work for general audiences…everything that has happened since then has been a joyous surprise.”

A good chunk of CheapShow’s fans are also fans of YouTube channel Barshens–a collaborative effort between Stuart “Ashens” Ashen and “My Virgin Kitchen”‘s Barry Lewis. Paul and Eli have featured heavily on the Barshens channel, usually as part of quiz and other game-based videos. CheapShow aren’t ones to shy away from this fact, embracing all the Barshens fans who’ve discovered CheapShow through the Barshens videos: “Barshens has been a BIG part of CheapShow’s success and I would be a stupid idiot knobhead to not recognise that. It was kind of a happy accident that we all worked together but it really has become a weird family. I like the fact that we plan to do a bunch of videos and yet they never really pan out that way in the end. Sometimes its a proper shitshow but often those surprises are hilarious and that’s what I love most… being surprised by whatever happens after we start filming a video. I think CheapShow is fused into Barshens now, for better or worse. CheapShow can be overpowering at times, so its usually not a great idea to have both Eli and myself in one video as it will often become a shouty nightmare. That’s when I feel most sorry for Stuart Ashen and Barry Lewis, when I can see the fear and worry in their faces in a kinda “what have we allowed to happen here?” way. I think we all love the “WTF” element of Barshens… I like to call what we do “Professional Unprofessionalism” it looks like a load of mess, but we actually care, craft and look after that mess.”

And when asked if he has a favourite part of the podcast that he really enjoys, Paul Gannon told us that it’s hard to pick a favourite section out of everything that goes on during the recordings: “I really don’t have favourite sections. I think what I love most is diving into one of the segments with Eli and seeing what we can trigger in one another. I have become horribly obsessed with buying board games based on old TV Game Shows, so I get a thrill when we play games on the show. I am also pathetically proud of our “TV Game Show Board Game Only” episodes, because it allows me to dive in to 1980s nostalgia and lean in to the light entertainment of the past. I slather the edit with old TV adverts, continuity links and TV show themes. As a result, even though they are not representative of CheapShow, I do love episodes 20 and 40…but also, there are episodes that have “plots” or adventures that we kinda improvise and work in the usual segments into these semi-scripted episodes. Basically, we just like to keep things different on CheapShow and keep playing with formats…which we do more often than not.”

But CheapShow is continuing to grow in size and scope, with its many fans eager for more and more content from its co-hosts. “We want to do live shows,” Gannon says, bringing joy to the eager fans who ask for live events on CheapShow’s social media accounts, “…we just don’t know when. We do have things in the pipeline, because we really miss doing live shows, but it’s always easier said than done. And that just comes down to time and money and we are still not completely sure if we can justify a big live show because we always fear that our show isn’t quite big enough to warrant a big brassy show. We definitely are planning live shows for 2018 and beyond. In terms of other plans, yes, we have a load…and now that we have help from people on Patreon, we can attempt to do more adventurous things. We are looking at more guests, new segments and episodes that take us out of our studio and into the big bad world to meet real people. So if you like us, tell the world and spread the good word!”

Thanks to Paul for taking the time to chat with us! You can find out more about the CheapShow podcast over on its official website.