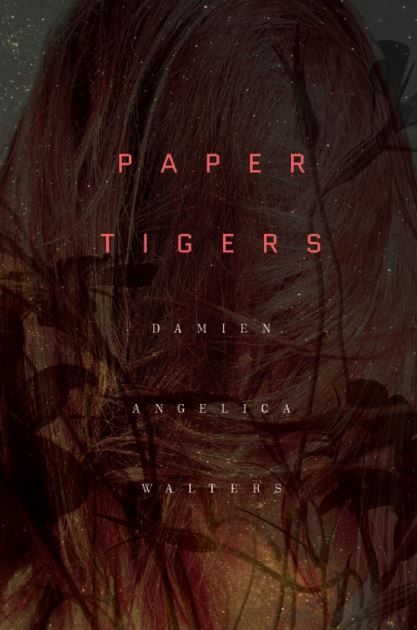 Recently we had the pleasure of reviewing Paper Tigers by Damien Angelica Waters. Even more recently, as in, right under this bit of text here, we got to speak to the wonderful author. It was fascinating to find out about the thoughts behind the novel.

1. Paper Tigers is as much a novel about a book choosing someone as it is about the more commonplace idea of a person choosing a book. Have you ever felt “found” or “discovered” by a book you’ve read? If so, what was it and what was that experience like?
I read Stephen King’s The Shining when I was eleven. That, for me, was a defining moment, not necessarily in my self being found but discovering that I’d grown as a reader. It was a profound shift, one that definitely played a part in shaping me as a writer. Over the years, Stephen King has received a lot of negative press for writing horror, but his talent at creating rich and believable settings and characters can’t be denied.

2. Since I was a kid, Alice’s world in Alice’s Adventures in Wonderland and Through the Looking-Glass has made me anxious; I never found its spontaneity and nightmare logic particularly “delightful,” which was how this world gets introduced to a lot of kids. I felt that world in a more Robert Wilson sort of way (and Tim Burton’s film get at this feeling too). Carroll seems to have inspired you to some degree with Paper Tigers. Do you read him as a little terrifying? And how did Carroll influence your work in this novel?
To be honest, I’ve not read either book in entirety since childhood, however, I’ve reread passages now and again and those revisitings, coupled with my childhood memories, engender feelings similar to yours. For me, the whimsy was always razor sharp and shrouded in shadows.

The main character’s name was definitely a call back to Carroll, although in the first draft her name was Lily. As the story unfolded and I realized that the photo album was a rabbit hole, she shifted from Lily to Alison in my head. That felt a little too on the nose initially, but when I started working on the second draft, the name change was too defined in my head to not alter it in the text as well.

3. Your character, George, says at one point: “Many things are possible, if you want them enough. The real question is, how much do you want the things of which you dare not speak?” What kind of relation do you see between desire and destruction or even death? Or why do you think gothic and horror throw them into relation? (I’ve been reading a lot of Freud and Lacan for some years now, so this is something that, after reading your book, has stuck with me.)
In gothic horror, there’s always been a correlation between desire, whether for knowledge or truth, and destruction. The ghost in the tower, the monster created from parts of other men, the lingering presence of the first wife; all of these and more are hallmarks of the shift from the literature of the Age of Reason to the gothic. The latter delved into new areas, such as exploration of the unknown, madness, deviance from social norms, and crossing boundaries, often sexual, and such concepts still hold relevance and continue to be mined.

I didn’t intentionally set out to write a novel with gothic sensibilities, but stories often find their proper footing along the way. Once Paper Tigers began to take its shape, I enjoyed trying to retain a gothic flavor while keeping its roots firmly set in the modern world.

4. The “softer” gothic tone of Paper Tigers flashes some pretty visceral horror in almost cinematic lightning-strike sort of way, reminiscent perhaps of an Alfred Hitchcock or even a David Lynch sort of thing. Are you a cinephile? Would you want to list three films that have most affected you or that have been most influential for the work you do in writing?
Yes, I’m a fan of movies, and while I love clever, thoughtful films, I’m also fond of the big cinematic spectacles that are often short of plot and long on special effects and explosions. I have an unabashed love for dinosaurs, monsters, and giant robots. I suspect it’s a throwback to movies I saw as a child like King Kong, The 7th Voyage of Sinbad, and Westworld.

Alien has definitely been one of the biggest influences on me. The claustrophobia, the creeping dread, the tension between the characters, the slow reveal of the monster. It’s masterful by all degrees, something I wasn’t truly aware of until I saw it as an adult. As a child, it was simply a frightening monster movie.

5. George Pennington emerged in my mind as a malevolent G.K. Chesterton. Did you have anyone specific in mind for this character?
Although I borrowed a family member’s name for the character, George wasn’t based on anyone in particular. He’s sort of an amalgam of every sepia-toned photograph of a man of that time period I’ve seen. Once I had an image of him in my head, I let my imagination spin the rest of his story, much as Alison imagines the same for the photos in the old albums she collects.

6. As I read Paper Tigers, the first thing I felt was atmosphere—perhaps it was all of the smells and sounds in the book—and much of this atmosphere seemed to evoke an Erik Satie sort of thing for me (or maybe I just listen to too much Satie). Music plays a role in the book, and even Alison herself is like music that changes tone, emerges with different colors (which I loved, by the way). If Alison had a “theme”—either in your head or in her own—what would it be? Or if you don’t like that way of putting it, what would be a kind of theme song for the book?
“Little Earthquakes” by Tori Amos would be Alison’s theme. Although the song is about a disintegrating relationship, the line “Give me life, give me pain, give me myself again” perfectly encapsulates Alison. She’s desperate to be whole, to emerge back into the world, but too terrorised by her own thoughts to accept that in order to do so she has to embrace her new reality, her new self.