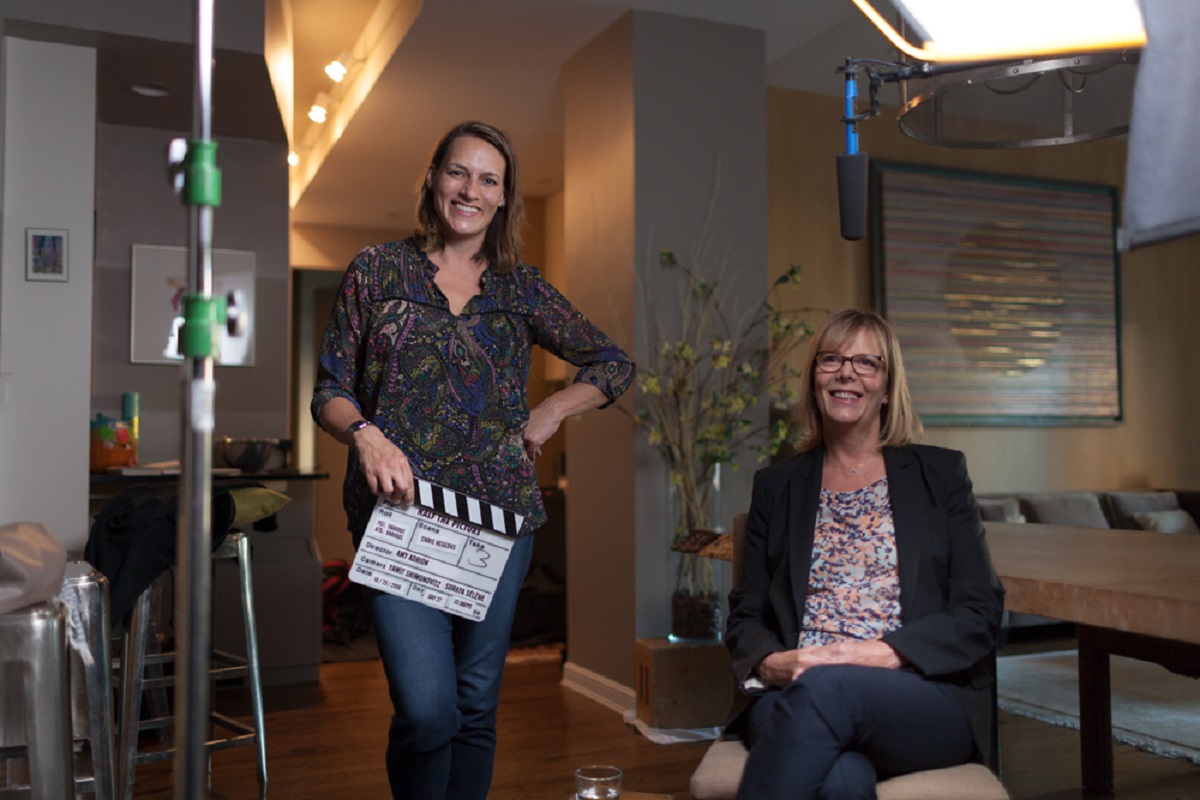 Filmmaker Amy Adrion took some time during this past week to speak with Cultured Vultures about her documentary, Half the Picture. The film premiered during the 2018 Sundance Film Festival and was also selected for the 2018 SXSW Film Festival.

Thanks for joining us today. How are things treating you?
Doing great – alternating between exhausted and exhilarated, but currently, at peace on a Sunday night, happy to be back in LA after some travel promoting Half the Picture (London, NYC) and thinking of all the folks who have given this film their energy, support and magic along the way and that’s a beautiful thing.

How excited were you to premiere the film at Sundance?
Words can’t describe. I’ve been to Sundance many times over the years and it is Ground Zero of indie film – I’ve worked on films that played there, supported friends with films there, snuck into parties through the back door there (no need to wait on line at the Riverhorse, people!), and generally been among the enthusiastic mass of cinephiles who descend on a gorgeous mountain town in the middle of January to love on movies. So, when we found our our film was accepted in the festival I was stunned, thrilled, ecstatic – but also a bit freaked out as we were still finishing the film! (Fun fact, I was surprised to learn that MANY of the films that screen at the festival are still being finished well into January, so that made me feel better.)

Half the Picture opened up in New York on June 8th after playing the festival circuit following the premiere at Sundance. As the film toured the circuit, what are some of the things you’ve heard from the audience?
The response has been humbling and wonderful – after literally every screening I’ve had women and men, but largely women, come up to me and tell me how much they needed this film, RIGHT NOW. The most incredible response has been when people have said, “I have this short film, I have this doc, I have this script that I’m working on and now I’m going to make it.” A friend of a friend saw the film and finally decided to move across the country to pursue a film project that she’s been wanting to do for years and now she’s actually doing it, in some small part, because of seeing our film at a film festival! What do you say to that? It’s astonishing.

The film also screened at SXSW. What was the experience there compared to Sundance and how great is someone like Janet Pierson for female filmmakers?
The Sundance experience was intense and beautiful because it was our World Premiere, we were sharing the film for the first time with audiences, we got our first reviews and we were working to sell the film, so there was a lot going on for me emotionally and in regard to the business of the film. Between Sundance and SXSW we sold the film, we’d gotten great reviews and there was a moment to exhale after a long stretch of intense work and stress (to be honest) and we came into Austin happy to be there and just really feeling welcomed by Janet and her dynamic team of programmers who love movies, love artists and know how to have a good time. You can’t live your life on an emotional high wire and Austin is a place that knows how to live well – good food, good beer, good music, good movies, good people (sigh…when can I go back?) Also, Janet Pierson is the first person in the film world who reached out to me to tell me she loved our movie and that came at a time when I really needed to hear it. And I will never forget what that meant to me. She’s like the film Godmother I’ve always wanted and I’m grateful that Janet, and her great team in Austin, are doing the work they do at SXSW. The film world needs her.

One of the things mentioned in the film is how reviews can make or break a movie. Some of the trades would send a male critic to review a film directed by a woman with a targeted demographic of women. In light of the recent Rotten Tomatoes study, what do you make of this and what changes need to be made?
I’m so glad that this is a topic that’s getting more attention recently. In our interview with Jill Soloway, they say that even when people who are not in the Hollywood system figure out a way to get a camera, hire a crew, make and finish a film, they then need to present that film to festival programmers who are largely male (hence the particular importance of Janet Pierson at SXSW), and once they are accepted into a festival, the life of their film is, in some part, in the hands of the reviewers at trade magazines – The Hollywood Reporter, Variety, Deadline, IndieWire, etc.

Rotten Tomatoes’ “top critics” are 73% male, and reviewers at the trades skew even more male, and the opinions of these reviewers have a tremendous impact on which films get sold, for how much, and what their trajectory in the world looks like. It’s tricky because you can’t say that women are going to support films by or about women and men are going to like films by or about men, it’s not that simple, BUT you also can’t ignore that the dominant voices in criticism, of people who decide what’s valuable and what’s not, are white men, and that does influence what gets supported, written about and celebrated in our culture. We need more diverse voices in film criticism, as festival programmers, in the Academy, so it’s not the same group of guys deciding what’s valuable for all audiences.

Following the release this month in LA, Half the Picture will be released on VOD in July. Is a Blu-Ray or DVD release planned? If so, what kind of bonus features can we expect?
We’re excited for Half the Picture to be released on iTunes, VOD, Blu-ray and DVD on July 24th, which will include unreleased interview clips that are fantastic but didn’t make it into the film. When you interview each of these directors for 60-90 minutes, it’s painful what you have to leave on the editing room floor! The DVD is a great opportunity to share some of that material that killed me to have to cut from the 95 minute film.

Was there anyone that you wanted to interview but were unable to get for the film?
Most of the women I approached, 95% of them, said yes immediately to sitting down for an interview. They are incredibly busy women so it shows how much they care about this issue that they made time to talk to me about it. And yes, there are a few women I pursued doggedly, over 18 months, to see if they would sit down with us and either they were too busy, their publicists/agents never passed along the request, or they simply chose not to participate. I can’t speculate as to exactly why they didn’t want to participate, but I will say that for a very long time women were reluctant to talk publicly about the discrimination they’ve faced because there is so much pressure for directors to be seen as successful, unflappable, charming, powerful, and women have been scared to call out people who have the power to hire them for their bad behavior. And when women have spoken up, they’ve historically been labeled too sensitive, difficult, unpleasant to work with, not a team player and all that nonsense that gets used to keep people quiet.

But, there is strength in solidarity, in finding that you’re not alone in dealing with discrimination, and women have begun speaking out loudly about inequality and injustice and that is good for all of us. It both supports women working now who still face these challenges, and it eases the way for women coming up behind us who can see how women have persevered and perhaps they will spend a little less time beating themselves up about situations that were out of their control or that had nothing to do with them personally but are just part of this old way of keeping people “in their place.”

I’m incredibly grateful to all the women who bravely, powerfully, candidly share their stories in HALF THE PICTURE. These are not sound bites, they dig deep and I think that’s what makes the film so special – their bravery and generosity of spirit.

What message do you want people to take away from the film?
I want people to understand that it matters, who directs the entertainment you watch. I want people to more fully understand the barriers that women face in the business so this nonsense about Hollywood being a meritocracy and the talented people magically rising to the top can be debunked – certain people have been sought after and given opportunities and others, despite making great work, have historically not been.

But finally, I want people to feel liberated by the legacy of these powerful artists, by their defiance and perseverance, and I want all people to feel inspired to make their own movies and tell their own stories. That would be the most impactful take-away, and I truly believe it can change the world.

What are you up to now that the film is in theaters?
As an indie filmmaker, I’m always hustling! Hustling to get the word out about Half the Picture in theaters, hustling to let people know about our VOD release on July 24th – our VOD release is July 24th, people! So much relies on the filmmaker reaching out to our audience, so I’ll be busy with that for the next few weeks, and then we travel to some international festivals in the late Summer and Fall, so I’m looking forward to that.

Once things calm down with Half the Picture, I’m looking for paid directing work – television, doc projects, commercials and branded content – I’m actively pursuing all of those avenues which is still a feat without an agent or manager. I’m in the same boat as many women filmmakers whose work, even after finding success on the film circuit and getting great reviews, continues to be seen as niche or an anomaly in the marketplace.

And, while I’m pursuing work-for-hire directing work, I’m also writing a narrative coming of age film about a high school girls basketball team in New Jersey that I describe as Clerks meets Hoosiers, so look out for that once I raise the dough to make it!

Thanks again for your time and congrats on this amazing documentary.
Thank you, Danielle! Was great to meet you in person at SXSW and very happy to chat with you over email!