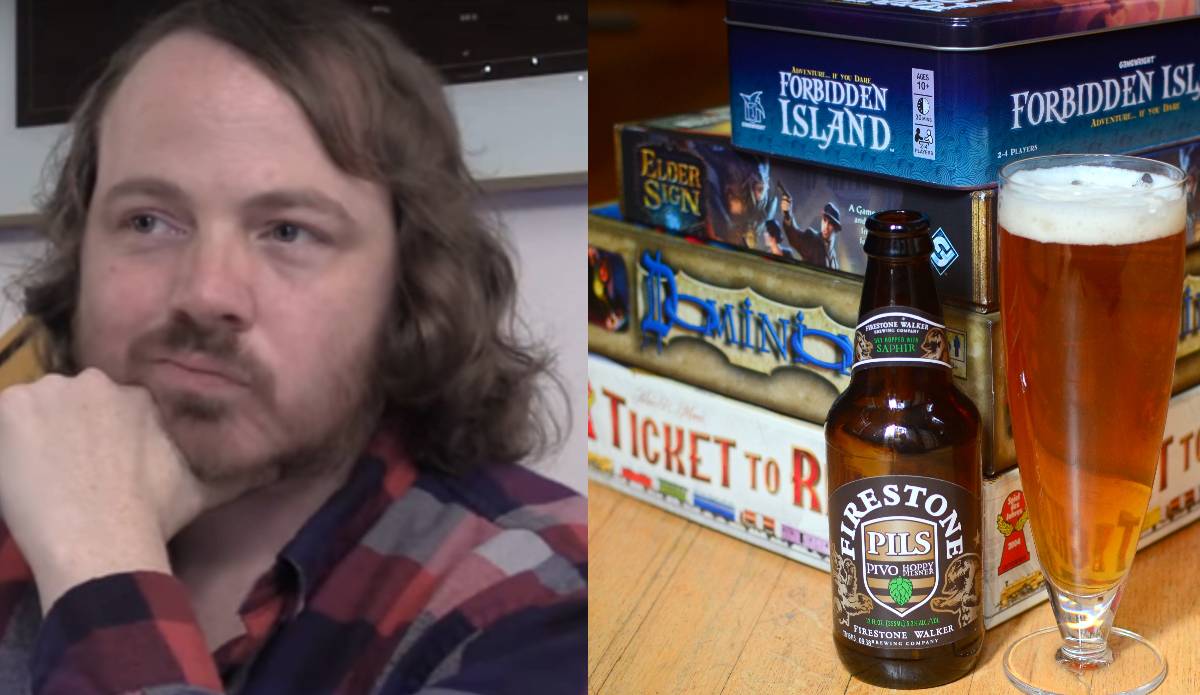 Aaron Yonda is a man you might know from many things: his work with Game Society, Beer & Board Games, Blame Society Films and Chad Vader, to name just a few. Along with a small group of regular collaborators, he’s gained over 700 million YouTube views across various channels, and is adept at acting, directing, writing, improv and more. If, like me, you have ever been a Film Studies student at any point in your life, you may also know him from his short film, “The Life and Death of a Pumpkin”, which–besides receiving numerous awards and even a grant from the Wisconsin Film Festival–has been shown to countless aspiring filmmakers as an excellent example of short filmmaking:

I talked with Yonda about his current projects, and we began by discussing “Beer and Board Games”, a comedic tabletop webseries which streams live every week, and posts edited versions of the livestream up on the Blame Society YouTube channel for free:

“It’s pretty much what it sounds like,” Yonda began, laughing, “it’s a comedy show where we play games and drink beer. It came about when I was playing board games with my brother a few years ago. We were having fun, making some jokes and stuff, and we though “Hey, what if we just set up some cameras and recorded this?”. So we did that…and it turned out it was pretty funny. So we decided to make a show out of it.”

As much as Beer & Board Games revolves around (and thrives on!) the over-consumption of alcohol, I can’t help but wonder if this is detrimental to making a quality show, and if it’s hard to keep things at least somewhat professional whilst intoxicated. Yonda let me know that my fears are founded, but that it’s what the people want: “Sometimes people like to see it when you get really, really drunk,” he explains, laughing, “even when you’re not doing a particularly good job, that can still be really funny, luckily. The first time we had this rum called Black Kraken, we just got, like, destroyed. No-one even knew what was happening any more. We were just blathering all over the place, and it ended up being entertaining, somehow.”

“But you know, other times it gets a little off the rails and we don’t play the game right, or things get weird, but for some reason, it just always ends up working. Especially when you edit it down to just its key, best moments. I think that always helps.” I agree with Yonda here: Matt Sloan’s editing helps add a sense of real comedic timing to the shorter versions of the live broadcasts, and helps the shows to seem slicker than their longer counterparts, removing the “behind-the-scenes” admin to create something more polished.

We talked briefly about Matt’s role in the show, and how he has the reputation for being the most “sensible” of the groups, yelling at people when things get too crazy: “That’s the thing,” Yonda explains, “you’ve gotta have one person who can sort of attempt to maintain some control. Sometimes when you’re drinking, you forget you’re actually making a show. Everybody just starts talking over each other and it’s like, we can’t use any of that. So it’s good to have that reminder. There’s been a few times where Matt hasn’t been on the show and it’s been up to me to play his role…I just end up yelling at everybody.”

We then moved onto the topic of Game Society, a YouTube gaming channel which Yonda runs in conjunction with his friends: Jason, Adam and Emre. The channel is perhaps best known for its “Skyrim For Pimps” series, which began as a simple Let’s Play style series, and eventually evolved into something more akin to an adventure into the possibilities of roleplay, where Yonda and co. react to in-game events as various characters. Jason Stephens is also known on the channel for his various impersonations and impressions, in which he plays through games as certain celebrities, like Morgan Freeman, Obama and Christopher Walken.

“I wanted a separate channel to play games on,” Yonda begins, detailing the creation of the “Game Society” channel, “I saw a lot of YouTube creators had separate channels for their gaming stuff, and I thought that was probably a good idea, not to make everything too cluttered on one channel.”

We then get onto the subject of “Skyrim For Pimps”, which, during its initial creation, took on a life of its own as Yonda began to build an entire world around the things that happened to him and his characters in game. “I didn’t think “Skyrim For Pimps” would be as popular as it became,” he tells me, “but, definitely, improv helped a lot when trying to grow that story. I knew how to react as a character, rather than just reacting as myself, and I’d learnt how to build on what the characters were saying, in-game.”

We began to wrap up our discussion by discussing “Chad Vader”, the titular character of a popular webseries which Yonda co-created with Matt Sloan (based on an idea by Tim Harmston), which portrays the day-to-day life of Chad Vader: Darth Vader’s brother who works in a convenience store.

“When we started getting asked to pitch content for a bunch of popular digital platforms, we went home and found an old idea of Darth Vader working in a convenience store. So Matt looked at it and said: “Let’s not have it be Darth Vader, let’s have it be somebody else.” And that when we came up with Chad Vader, Darth Vader’s brother who is just not as cool as Darth.”

The idea quickly won over any TV execs and producers, as Yonda explained: “We took the idea to a bunch of places and pitched it along with some other ideas. Chad Vader was the only one that people cared about. We flew back home and we were really excited because everyone had been really positive about Chad Vader. But then, we didn’t hear anything, for like…six months.”

Unfortunately, Chad Vader never made it to TV, as Yonda explained: “We found out later that everyone was too worried about Lucasfilm suing the crap out of them. Which is fair, I suppose.”

Despite the setback, Yonda (with a crew of dedicated volunteers) shot the show anyway, and, after being featured on YouTube’s front page back in 2006, it soon became a viral sensation:

And I was pleasantly surprised at Yonda’s response when I asked him about the future of Chad Vader and co.: “Right now we’re planting the seeds of bringing Chad Vader back. I don’t have any idea whether it will happen or not, but I think the time is right, you know, Star Wars is a big deal again, and so we’re definitely thinking about it and trying to work out how we can get a budget for it. The reason we had to stop making it was because we never really had an actual budget for Chad Vader, you know, the YouTube revenue never covered the production cost, and the crew was all volunteers, and there’s only so much time people can give you. But we do want to bring it back–we’re thinking about it.”

Thank you to Aaron Yonda for taking the time to talk to me! To find out more about Aaron Yonda’s work, you can visit his website at aaronyonda.com. Sorry for talking over Brad whilst he was trying to give directions.