How Family Guy Lost Its Way

Seth MacFarlane’s long-running animation has rapidly run out of steam - and acclaim. 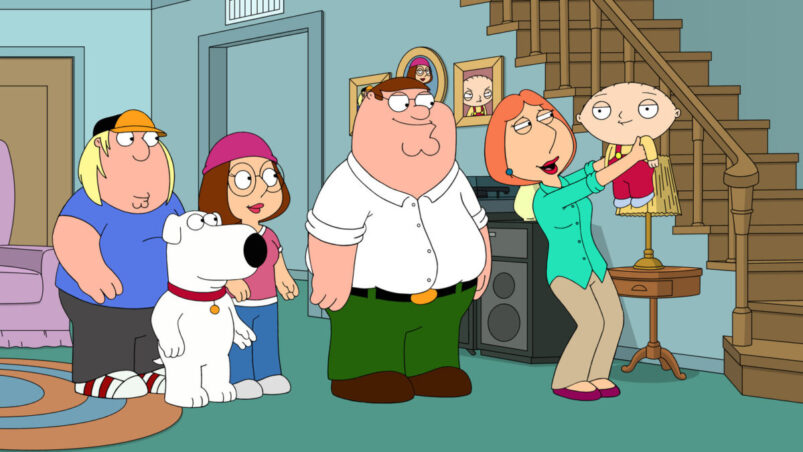 Few shows seem to have lost the plot so spectacularly as Family Guy. Seth MacFarlane’s animated titan has always provoked outrage and debate from both sides of the cultural divide, but there was a time when the show’s legions of fans were ever-willing to step in to defend their subversive champion with unquestioning devotion.

But, it seems, the mood has shifted. Rather than being a divisive and socially relevant cartoon that lampooned the nuclear American family and took things to places it felt The Simpsons was unwilling to tread, few would readily jump to the aid of the Griffin clan in 2022. More than 20 years after its opening season, Family Guy has lost the semblance of credibility to which it once clung. Nowadays, Family Guy is the internet’s cultural whipping boy.

When it fully debuted on Fox in 1999, Family Guy was far removed from its current incarnation. Although the general setup and cast of characters have essentially remained the same, the show debuted with an altogether different tone. Cutaways were few and far between, the humour was gentler and less cutting, the zany streak which would grow following its reboot much more muted. One gets the impression that Family Guy was playing to a more traditional comedy audience in the early years.

Things changed in 2002 after MacFarlane’s baby was cancelled and then rebooted following its third season, with arguably the strongest run, Season 4, debuting in 2005. It was here that Family Guy changed course, ditching the traditional, set-up-knock-down gags of the past for the surreal, zippy humour which would become its trademark. While some might cite the earliest seasons as Family Guy’s peak, Seasons 4 to 8 feel like the show firing on all cylinders.

During this period, each character finds their own rich comic niche, with Peter hitting the right level of idiocy, Lois appearing less downtrodden and cynical, and Brian far from the douchebag pseudointellectual he would eventually become. Each dynamic functions at its most comically profitable without tipping over into actively exploitative humour, each participant maintaining some degree of nuance while still eliciting genuine laughs. Many of Family Guy’s most iconic episodes are drawn from this period, from Season 4 ‘Petarded’ and ‘PTV’ to Season 6’s ‘Lois Kills Stewie’ and Season 8’s sublime ‘Road to the Multiverse’.

Family Guy’s ‘golden period’ sees some of the show’s strongest writing, while its cutaway gags, these days decried as lazy and outdated, remain fresh and diverting rather than confused and arbitrary. It’s unsurprising that these seasons also coincided with the rise of video streaming sites such as YouTube which provided ideal platforms for these self-contained sketches and vignettes. Perennial favourites including ‘Alan Rickman’s Answering Machine’, ‘Peter Narrates His Own Life’, ‘Cookie Monster in Rehab’ and ‘Will Smith’s Clean Rapping’ have racked up millions of views online.

Those days are long gone, and much like The Simpsons, Family Guy has been suffering from the laws of diminishing returns. Fox’s animated sitcom has declined hugely, predominantly owing to its drop in writing quality, its increasingly spiteful humour and a growing disdain for its own characters. Criticism and disapproval have been present long before the show suffered any genuine dip in quality, however, with Family Guy never receiving the love and respect it may have craved from its contemporaries and peers.

South Park’s Trey Parker and Matt Stone have been outspoken on their dislike for their animated rival, admitting “we do hate it…we just don’t respect it in terms of writing”. When ‘Cartoon Wars’, the South Park episode which lambasted Family Guy aired, Stone and Parker spoke of receiving calls from writers from both The Simpsons and King of The Hill thanking them for “doing God’s work”. South Park’s parodic barbs were rooted in its creators’ beliefs that this rival cartoon was plagued with “lazy writing” and easy gags, an assessment that has only grown increasingly apposite. Family Guy’s downward trajectory has now led to it being almost universally despised by critics and audiences alike.

Any dignity or respect any character might have commanded has been replaced by narratives and situations designed to present them negatively. Brian’s quest for intellectual security has been replaced by pseudo-intellectual hypocrisy, his earlier romantic dalliances warping into grotesque, amoral womanising. In earlier seasons, Joe was a great cop despite being disabled and overcame the obstacles of a predominantly physical profession. Now his disability puts him as the butt of jokes about catheters and poop sacks, borne more out of cynicism and vitriol than satire or subversion. The show’s treatment of Joe especially evidences a nasty, shallow edge which the writing has adopted further into the show’s run. One senses that not only do the writers no longer care for their characters, but they have actively begun to despise them.

Gone, too, are most of the finest narratives which Family Guy boasted in its earlier seasons. The show might have been madcap, but the writers were still crafting stories that made sincere, authentic and often insightful points. Season 5’s ‘Barely Legal‘, which sees Meg infatuated with Brian after a prom pity date, managed to be genuinely funny while delving into the latter’s insecurities. Season 4’s ‘The Father, The Son and the Holy Fonz’ takes gentle prods at organised religion, while ‘You May Now Kiss the… Uh… Guy Who Receives’ tackled gay marriage with relative sincerity.

Nowadays, Family Guy chases a zeitgeist of which it is no longer a part, attacking millennials (‘HTTPete’) or Trump (‘Trump Guy’) for easy material. Ideas are now often lifted from more successful shows, such as ‘Send in Stewie, Please’ closely resembling It’s Always Sunny In Philadelphia’s ‘The Gang Gets Analyzed’ or, ‘Holly Bibble’ simply rehashing The Simpsons anthology ‘Simpsons Bible Stories’.

Family Guy has run out of ideas, hardly a shameful predicament for a show pushing into its twenty-first season and suffering from the continued absence of the man who helped birth it. The episode ‘The Simpsons Guy’ may have been successful, but it’s rarely the sign of a cartoon operating at full strength when it enlists its greatest rival for a crossover. ‘Road to India’ should have been Family Guy in its element, but too-obvious jokes about bindis and call centres left it feeling tired and stale in comparison to finer ‘road to’ outings. Audiences seem increasingly justified in echoing Parker and Stone’s criticisms of that Family Guy as a relic out of step with a new generation of viewers.

All is not lost, nor have Family Guy’s more recent seasons been nothing but abject misery. The stellar voice cast remains as devoted and exceptional as ever, and there are always some decent gags to be found in and among the burgeoning levels of comic chaff. Some genuinely great episodes still emerged further into the show’s run, such as Season 10’s ‘Road to the North Pole’ and ‘Back to the Pilot’, as well as the sharply satirical ‘The D in Apartment 23’ from Season 16, but it’s becoming increasingly hard to find anything close to a ‘great’ episode from more recent seasons.

Any flashes of brilliance are few and far between. Family Guy’s writers have pushed their characters as far as they will go and seem unaware of what to do with them. Nastiness and cynicism have infected a creation once filled with wit and anarchic satire, while reused narratives and recurring plot devices feel stale and repetitive. MacFarlane hasn’t been creatively involved with the show since 2010, his absence keenly felt by the show’s writers and, in turn, its audience. Family Guy has lost the plot and strayed from its identity in search of the relevance it once enjoyed. If things continue the way they’re going, it’s a relevance it will likely never see again.