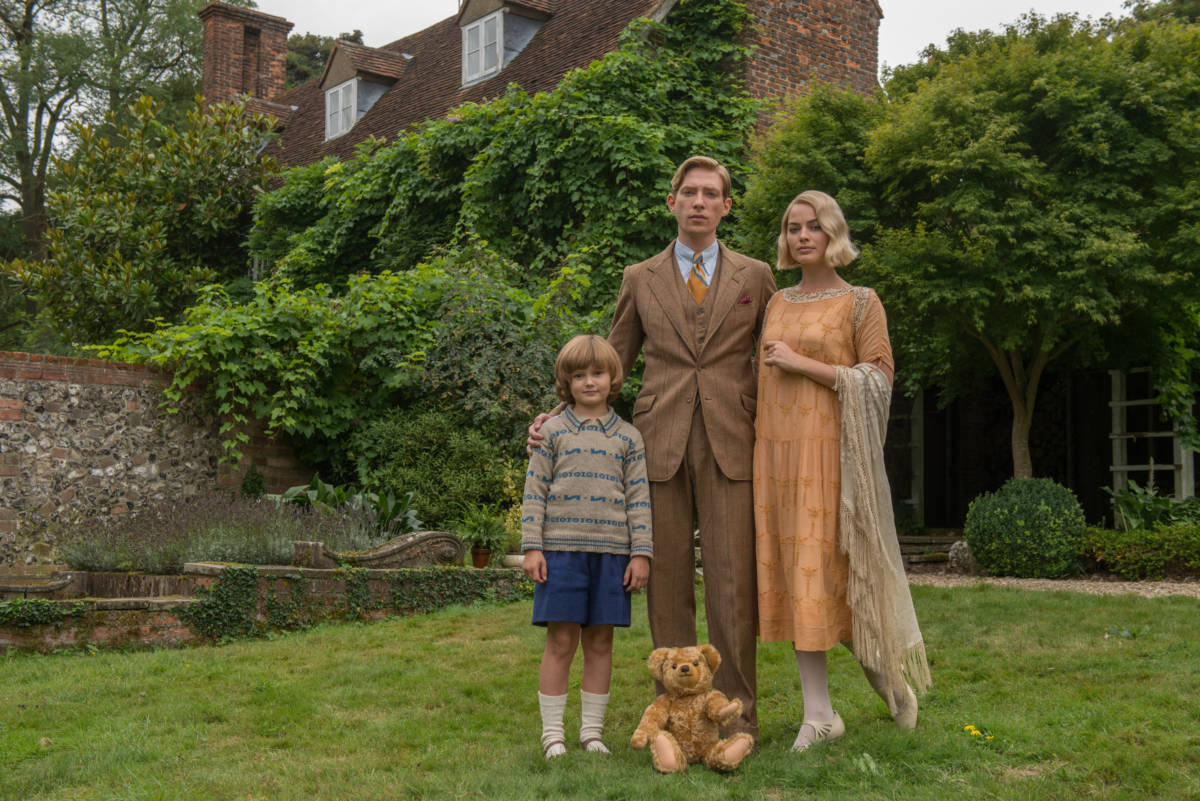 Goodbye Christopher Robin is a film that explores PTSD, childhood, fathers and sons, child celebrities, and brings to life the true story behind the creation of Winnie the Pooh.

Simon Curtis directs from a screenplay written by Frank Cottrell-Boyce and Simon Vaughan. Curtis did great work on both My Week with Marilyn and the underrated Woman in Gold, but he’s working from a screenplay that just can’t figure out whether it wants to be a post-war PTSD film or one of childhood wonder. It’s disappointing on that front because this is a truly fascinating story to watch when it comes to stories that many are familiar with by way of book, television cartoons, or movies.

The relationship between A.A. Milne (Domhnall Gleeson in his third film of 2017) and his son, Christopher Robin “Billy” Milne (Will Tilston), is one that’s rarely talked about. The younger Milne was one of the earliest child celebrities and he wasn’t having any of it as the Winnie the Pooh books grew popular. The toys served their purpose as Billy was growing up, but everyone around him knew him as Christopher Robin, whether he liked it or not. If the filmmakers had focused on this angle rather than the PTSD aspect, the film could make a better impact with audiences. This isn’t to take anything away from Milne’s PTSD, which is valid, but are audiences expecting to watch a post-war film or the creation of Winnie the Pooh?

After fighting for England in World War 1, the elder Milne struggled to write essays and plays. He decides that it would be better to move his family to the countryside of East Sussex with the hope that he could write something that could make people of England happy. Nobody could blame him for wanting to do that, but for Milne, no matter what he did, nothing was working. It wasn’t until some toy animals came into his son’s life that Milne started to get the idea to write the Winnie the Pooh stories that live on today.

Tilston impresses in his acting debut. This is the first time that he’s acted and he holds his own against the likes of Gleeson, Robbie, and MacDonald. The scene-work is fun to watch with Robbie because of her doing the voices of the animals. Gleeson tries to match Robbie on this front when Daphne disappears for a bit, but it doesn’t hit in the same way. There’s a father-son bond that the two share on screen and it’s something that should resonate with families when watching the second act.

The elder Milne is joined by wife Daphne (Margot Robbie) and nanny Olive (Kelly Macdonald) in raising Christopher Robin amid the waive of their work becoming popular across the globe. The film makes a point to express the role that Olive plays in the young Milne’s life and she had just as much of an impact on Winnie the Pooh as everyone else did. We see how hurt Billy gets when she resigns to get married.

Produced on a budget under $3 million, it took 8 weeks to shoot the film in many of the actual areas in which A.A. Milne lived. The eyre makes for some amazing cinematic visuals, which shouldn’t come as a surprise for those who are familiar with the cartoons. It’s a sight to see.

A complete unknown a few years ago, Robbie continues her breakout career with solid success. Her chemistry with both Gleeson and Tilston make the film work but their acting can only do so much. It’s a fine supporting role even as Daphne takes an extended absence, leaving both A.A. and Billy to bond with each other.

Goodbye Christopher Robin is a similar film to Finding Neverland (2004), which examines the events that led Sir J.M. Barrie to write Peter Pan. That’s as far as the similarities go, I’m afraid. Gleeson does great work as the author but the question to ask is whether this a film about PTSD or childhood wonder? It’s not sure which angle that the filmmakers are trying to stress.

This isn’t to say that the creation of Winnie the Pooh isn’t a story worth telling. It’s just that this film can’t figure out how it wants to do so and that’s a shame.

Fox Searchlight opened Goodbye Christopher Robin in New York and Los Angeles on October 6, 2017 with an expansion to follow.