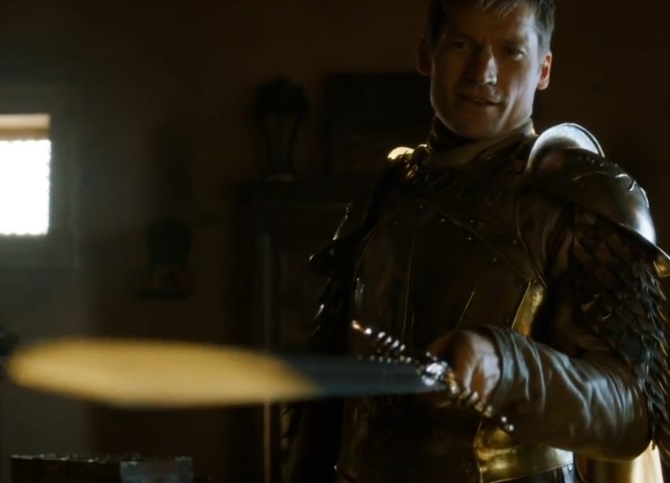 Callum Davies looks forward to the new season of Game of Thrones.

We’re all getting used to it now; around the beginning of January we’re treated to a tantalizing parade of violence, dragons, sex, ambiguous sound bites and characters eyeing each other suspiciously as a new Game of Thrones trailer drops. This most recent one, set to the sultry wails of Chelsea Wolfe in yet another bid to recapture the magic of that stunning season 2 trailer that featured Florence + The Machine’s Seven Devils so I figured I’d provide a handy guide for what to expect from the fourth season of everyone’s favourite betrayal-fest. Steer clear if you’re not up to date.

So, where were we?

Before we start looking forward, a quick reminder of everything that’s gone down. It’s been a while since season 3 and certain aspects of it might have faded in the memories of some (with the exception of one particularly eventful wedding). As we closed out the last episode: Jon Snow was back at Castle Black having just endured perhaps the least amicable breakup since Fatal Attraction, Bran was making ready to venture beyond the wall with Hodor and the Reeds, Tyrion and Sansa were trying to make the best of their tragic union, Theon was one cock lighter and had been renamed Reek as his sister was shipping out to rescue him, Stannis was gearing up to sail to Eastwatch and aid the Nights Watch, Arya was still off gallivanting with The Hound, Daenerys and company had just liberated the slave city of Yunkai and Joffrey had been sent to bed with no supper. The shadow of the Red Wedding loomed large over the closing moments of the last season, as did the approaching wedding of Joffrey and Margery. Also with the threat beyond the wall looming larger than ever, it was all fairly miserable at the season’s end, really. But anyway, enough with the old, in with the new.

As with all the previous seasons, we can expect a host of new characters to join the party with varying levels of significance, so here’s who to keep an eye out for:

Pedro Pascal as Oberyn Martell: As the royal wedding gets closer more powerful families will begin to arrive in King’s Landing, chief amongst them; the Martells of Dorne. They’ve been mentioned before, especially when the princess was sent off to be engaged to one of their sons, but we are yet to be acquainted with them. They have a big role to play in upcoming events. That’s truer of Oberyn than anyone else. Also known as The Red Viper, he’s an interesting specimen. He has a brood of bastard offspring known as the Sand Snakes, an aptitude with a spear and a serious bone to pick with certain residents of the capital.

Mark Gatiss as Tycho Nestoris: We established in season 1 that the crown was in serious debt but the Lannisters are the only known creditors thus far. In this coming season we’re going to be familiarized with another one; The Iron Bank of Braavos. Nestoris is a representative who is sent to parlay with Stannis Baratheon regarding the royal debt, since his brother incurred it. The Iron Bank is not a place you want to be indebted to, imagine if Wonga.com had the capacity to topple empires and you get the idea.

Yuri Kolokolnikov as Styr, Magnar of Thenn: The Thenn are a very particular strain of wildlings, directly descended from The First Man, they speak mainly in the old tongue, are pals with the giants and fearlessly loyal. Styr is their Magnar, which in essence is their leader, but they see him almost as a god. He’s big, he’s bald and he means business so expect to see him make a serious impact as the wildlings march closer to the wall.

Roger Ashton-Griffiths as Mace Tyrell: The last influential member of the Tyrell family left to be introduced, we’ve heard from his son that Mace is rich and from his mother that he’s an idiot but that’s not necessarily a complete picture. He’s also quite fat. Like the Martells, he’ll rock up just in time to attend the wedding. 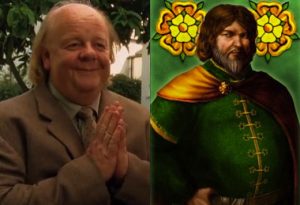 Rupert Vansittart as Yohn Royce: Remember Ser Vardis Egan? He was that grumpy knight from season 1 that Bronn kicked down a hole. With him gone, Yohn Royce is the most imposing knight present at Eyrie, with one key addendum: he doesn’t answer to anyone. As you might recall, Littlefinger is tasked to marry Lysa, Catlin’s batshit crazy sister and Royce is none too happy about that and he’s also fairly impervious to Littlefinger’s bullshitting.

Indira Varma as Ellaria Sand: Paramour to Oberyn Martell, Ellaria goes to King’s Landing with him for the wedding. Often described in the books as alluring and sexually adventurous, it’ll be interesting to see how they approach that, given the show’s reputation (EDITOR’S NOTE: tits)

Hafþór Júlíus Björnsson as Gregor Clegane (The Mountain): Yep, we’re at the third peak. Having been recast in season 2 from a big stuntman to a slightly bigger stuntman with a voice that sat somewhere between Darth Vader and that hologram thing from Tron, he’s now been recast for a second time. This time, a strongman is taking up the mantle, a few inches shorter than the previous incarnation, but a good deal bulkier. Up until now The Mountain was talked about more than he actually appeared on screen, with one instance of horse abuse being the only evidence of his malicious nature. That all changes this season so let’s hope this new guy, an Icelandic monster-truck that walks like a man, is up to the task.

During the closing moments of season 3, a lot of board shuffling went on, characters moved around, became displaced and were given new agendas, so here’s an idea of how it’s going to pan out.

Sibling rivalry: During the course of the third season, an internal struggle ensued within the ranks of the Night’s Watch, a struggle that resulted in the death of Lord Commander Mormont. As a result, Jon will be returning to a displaced and disrupted Castle Black with no clear leader with things likely to get heated. Certain brothers, familiar and otherwise, are going to be playing pivotal roles.

People’s Champion: Daenerys had a pretty easy time of it with the first two slave cities, all told. Astapor was reduced to an impromptu dragon buffet and with the help of Daario Naharis she managed to catch Yunkai with their pants down. The third and final slave city left to tackle is Meereen; it’s bigger, badder and well prepared for her arrival. Everyone’s favourite fireproof princess will have to adopt a whole new approach.

Neither marriage nor war: After an awkward one and a gut-wrenching one, it’s time for the third wedding on the checklist and it’s by far the grandest. Joffrey and Margery’s wedding has been creeping up since the end of the second season and now it’s finally imminent. I won’t go into any detail but what I will say is this: if you legitimately expect it to go off without a hitch, for everything to go according to plan, you haven’t been paying attention.

Attack on titan: While the black brothers are trying to figure out a pecking order, Mance Rayder draws closer, the White Walkers are hot on his heels and the grouchy smurf of the Baratheon family is also headed their way with his pyromaniac mistress. Whoever gets there first, the long-standing promise of the wall being the epicenter of shit going down is beginning to ring true.

Tyrion being Tyrion: Tyrion had a hard time of it last season; almost as a recompense for all the fun he had acting as Hand of the King. Things aren’t going to get any easier for him but he’s going to have plenty to be getting on with. The trailer shows him being marched down a hallway in manacles. I won’t reveal the reasons behind that beyond stating that our beloved imp is in deep shit with no ladder in sight and the waves he’s going to make when he tries to swim to the surface are going to swell. I’ll stop torturing that metaphor now.

The Red Wedding was the only real decisive moment from the third book (A Storm of Swords) that made it into season 3, there’s a whole host of moments climactic, shocking and unforgettable that are yet to be explored. In the book the Red Wedding happens around half way through the first volume, whereas on the show they put it off until near the end to line it up with Ned’s execution and Blackwater as yet another jaw-dropping penultimate episode.

In addition to this, it seems as if certain elements from the fourth and fifth books are also going to start coming into play, meaning that this coming season is going to be simply relentless. There won’t be a moment wasted and certain deviations from what happened in the books will even keep the readers guessing. Another exciting prospect is the return of Neil Marshall to direct another episode. His previous credits include Dog Soldiers and The Descent and he was the man responsible for the mind-blowing mass of wildfire, death and drunken queens that was Blackwater. I love the way Game of Thrones is constructed, with so much time devoted to characterization and meaningful interaction between the impeccable cast, so to have the promise of that coupled with more on screen action and plot twists than the rest of the seasons combined is immensely exciting. This is going to be one of the televisual highlights of the year. You have my permission to get psyched.

Game of Thrones returns to our screens on April 6th. Check the trailer for season 4 below.