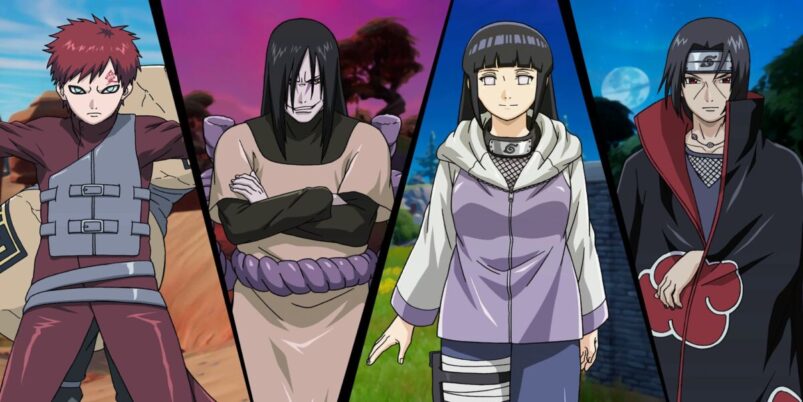 Fortnite and Naruto’s last crossover was maybe the most popular collaboration the game has had to date, so it’s no surprise that the two properties are teaming up again for new skins with Naruto: Rivals x Fortnite.

This time out, Itachi, Gaara, Orochimaru and Hinata Hyūga are joining the Fortnite island, each as their own skin. Itachi Uchiha is probably the most popular character of the bunch as the anime’s premier edgelord, but it’s good to see the variety with some of the less popular characters from the gigantic anime. Gaara starts out as Naruto’s rival before emulating him and doing a face turn, Orochimaru is a bad guy with snake arms who refuses to die, and Hinata used to be a heiress before eventually marrying the titular Naruto.

Here’s everything you ought to know about Naruto in Fortnite for the second time.

As mentioned, Itachi, Gaara, Orochimaru and Hinata all get their own skins in Fortnite this time out.

Here’s a look at Itachi and Gaara, who both have two styles in-game.

And here’s Hinata, the wife of Naruto, who actually has three styles in total.

These Naruto characters will also have a mixture of built-in and unique emotes, with Orochimaru having a built-in emote.

And finally, here’s a look at some of the gliders that will be sold separately and also built-in.

You can also check out all of the new Naruto cosmetics in the video below.

Which is your favorite Naruto skin this time out?

Just like the prices of other collaborations, the Naruto skins cost a range of prices.

Players can also purchase the Nindo Gear Bundke for 1300 V-Bucks.

This second batch of Naruto skins are due to release in Fortnite on June 24th, 2022. This is the date that’s been attached to ever bit of promotional art seen out in the real world so far.

Like the first time around, they will likely remain in the Fortnite Item Shop for a week or more. Just like last time, there’s also The Nindo to complete for free rewards.

Find out all of the details by going to fn.gg/NarutoRivals.