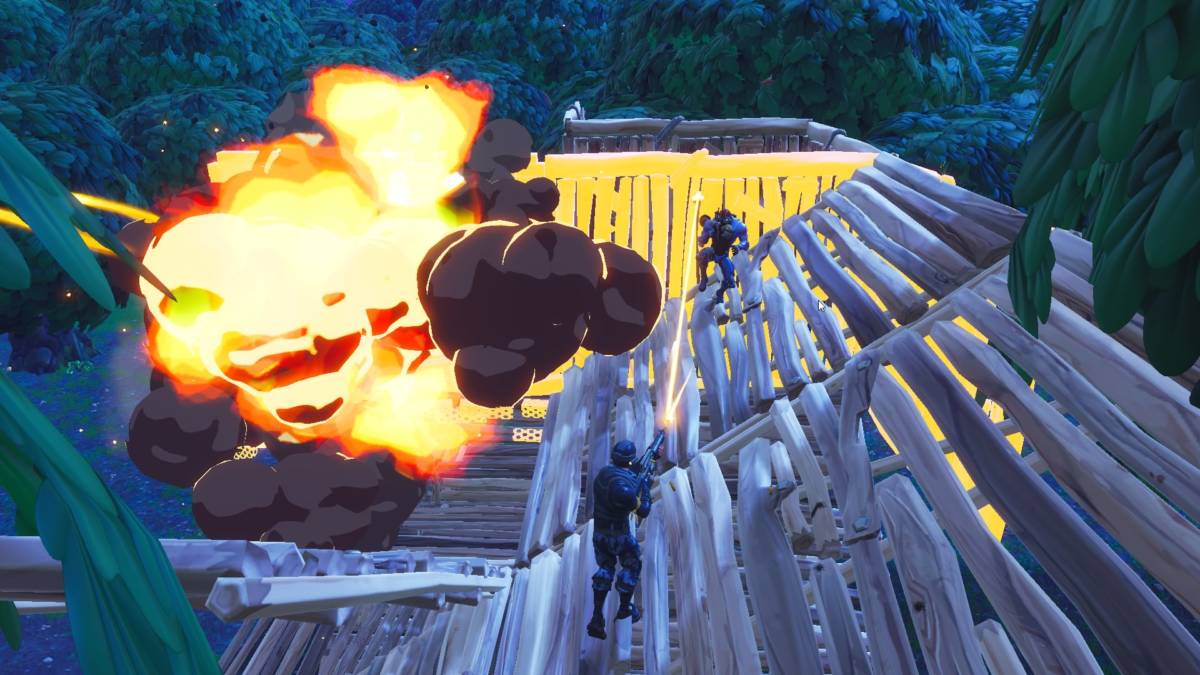 As with most multiplayer shooters, Fortnite is no different to its FPS peers in that positioning is a vital ingredient for success. Where Fortnite differs from its brethren, however, is you can build your own cover. This gives you enormous control and flexibility when it comes to positioning. Being able to build your own high-ground and corners really shakes up your ability to respond to dicey situations, get the drop on your opponent and simply win more firefights. Therefore, while building is a skill unique to Fortnite, it’s an absolutely vital ingredient for success; as important, if not more, than aiming.

1. Turn on Turbo Building
This option is on by default, but I highly recommend you confirm it’s on. Turbo Building allows you to place multiple pieces in quick succession by simply holding your build button down. This will speed up your building significantly, especially under pressure.

2. Turn on Auto Material Change
Another simple option change (this should also be on by default) that can make building all the more easier. This option automatically switches to another resource if you run out of the current one you’re building with. This is a life saver, as in high pressure situations the last thing you’re usually monitoring is your resource counter. This will save your life in obvious and tangible ways many times. 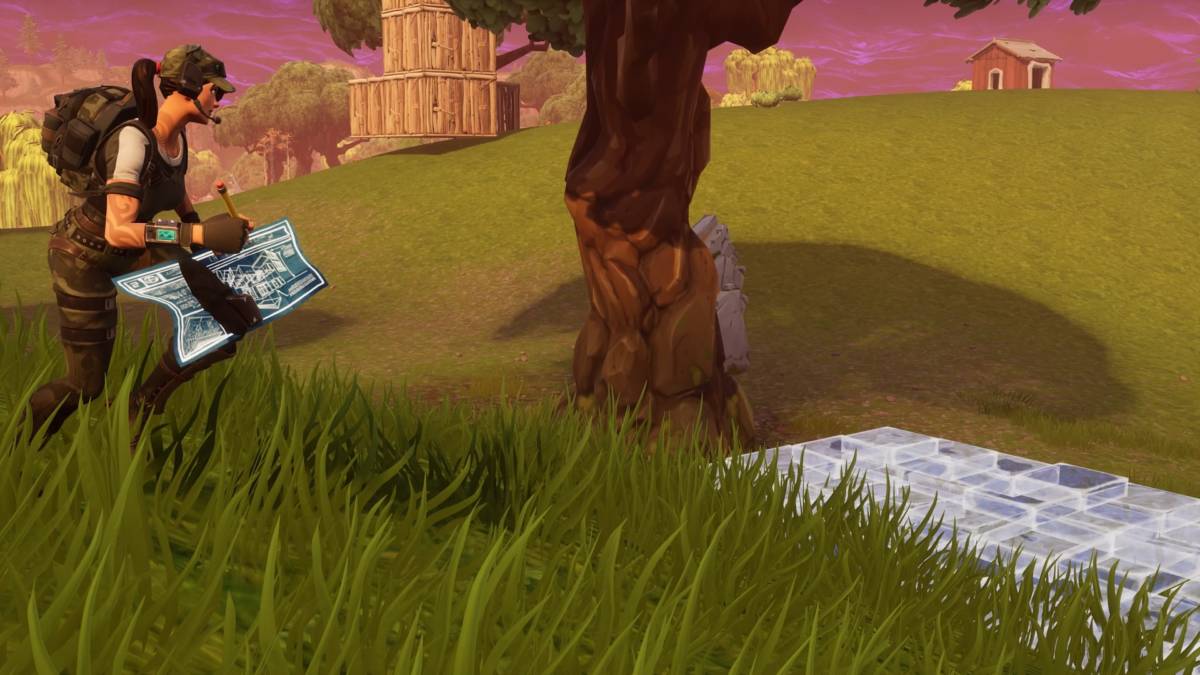 3. Set your keybinds up properly
The last of the pre-gameplay tips, but probably the most important. Having easily accessible keybinds (without neglecting other important keys) is key. Being able to build the pieces you need in a hurry if often the difference between Victory Royale and the ‘other’ outcome. For me, the default keys (PC) of F1 through F4 were completely untenable and cumbersome. I was so unaccustomed to using those keys that I’d just avoid building entirely (didn’t end well, to be sure) until I changed them. Experiment with different set-ups and layouts until you find one that suits you. Then commit to it (within reason), this will help to build up some muscle memory and subsequently your building speed after a bit of practise. Don’t neglect your edit key either, it’s just as important.

4. Understand the building grid
For the more experienced Fortnite players amongst us, this might sound obvious, but this isn’t a ‘freeform’ building game. Fortnite functions quite like Minecraft. All the building pieces can only be placed on a grid. This means all pieces will always connect with each other at their border, regardless of terrain. Each grid ‘section’ is the space of a 1×1 cube. That means a wall has all the dimensions necessary to determine how big a grid section is.

This system has problems though and can lead to some weird looking situations where you’re trying to place a wall, but because of your elevation on the terrain, only half (or sometimes far less) is sticking out, providing inadequate cover. Other times, the game will simply not allow you to build due to some obstacle. Often it feels quite arbitrary as to why you can sometimes build through some parts of the terrain and not others. This can lead to some frustrating deaths; really frustrating. The best advice for countering this is to be more liberal with your building placement (especially vertically). Don’t assume a single wall will do it, try to build more than you need as fast as possible. This will avoid those crucial moments where you’re confused as a sniper bullet perforates your skull.

5. Build first where applicable
This was a lesson particularly difficult for me to learn. Often, the best play is to build as your first option when starting a fight. This reduces the chance of instagibs or enemies you didn’t see earlier from having a clean shot on you. Additionally, it gives you a better angle for your opener, giving you a decisive head start. If you fail an ambush, avoid over committing to a duel with your prey. If you feel you’ve lost the advantage, build to stall and try to regain the advantage. Even if you’re confident you can beat that particular player, you don’t know what the other 98 are doing. Finally, the sound of building pieces coming together isn’t as loud as you imagine, it’s only loud once you’re within the building structure itself. Therefore, you can get quite close to someone and build and they generally won’t hear you.

6. Speed trumps precision
Ever heard the phrase “The quick and the dead”? That’s the most succinct way of describing successful Fortnite builders. Getting ramps down to reposition or walls for cover as fast as possible takes precedence over how efficiently or artistically you’re consuming your materials. A lot of combat building is just about disrupting enemy sightlines, stalling and claiming the high ground. Making a 500 wood towering maze is a great way to accomplish that. This is why Turbo Building is so important to have on. Being overly wasteful with your materials but surviving is still preferable to being dead as you can always collect more. 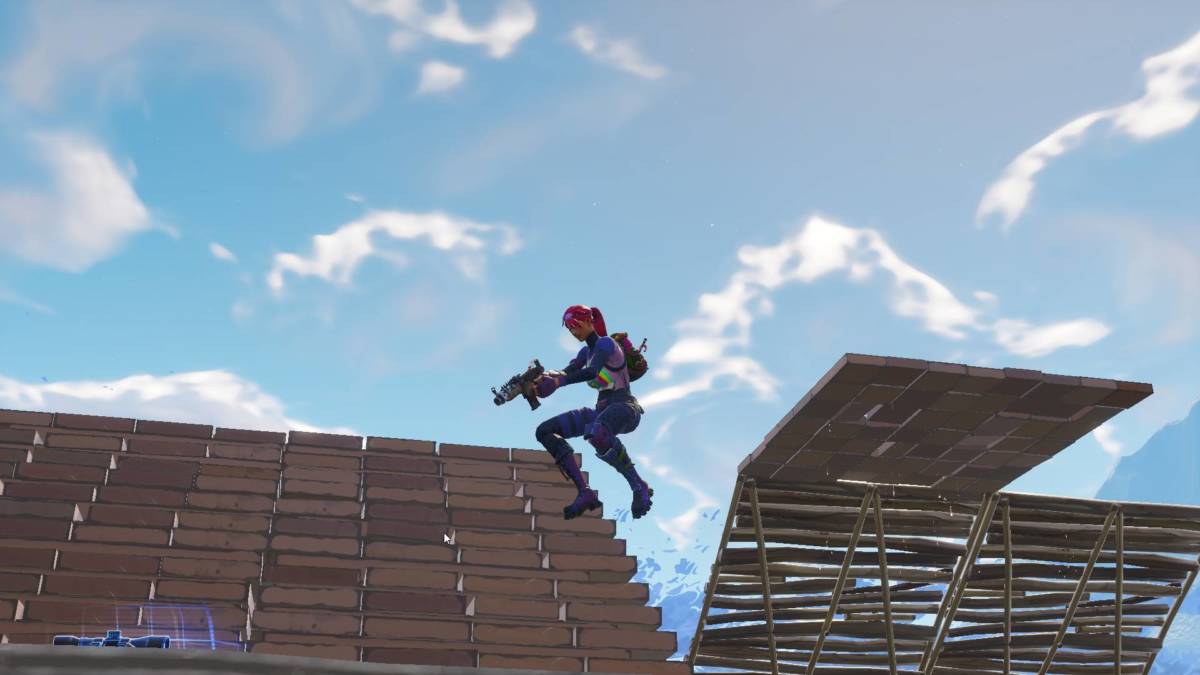 7. Understand the importance of each building piece
Becoming intimately familiar with the uses of the three primary building pieces is mandatory to being an effective builder. The wall piece is mostly used mostly for cover, reinforcing ramps and creating a base. Ramps are used for elevation, repositioning and cover. Ramps are, generally speaking, the most useful piece. Floors/ceilings are less useful than ramps and walls, used primarily for making bridges, roofs and to delay/deter attackers from directly above. Try to always build a roof on a structure you don’t intend to pop out and shoot from the top of; it’ll prevent a lot of unnecessary deaths, trust me on that. The pyramid structure has some niche uses, like making a directional roof with a view hole or a pseudo ramp with a different facing. Realistically though, you can accomplish everything important with the three base pieces; it’s not worth investing the time into learning how to make the pyramid structure useable for combat situations.

8. Learn how editing works and how important it is
Editing in Fortnite works somewhat similarly to how building placement does. Each piece functions on a grid system with each grid section being selectable. Selecting a section will change the piece from blue to transparent. Transparent means that section of the wall will now disappear while the sections remain. Sounds simple enough, but there’s a catch: each piece will only take a predetermined set of inputs. It’s not freeform, you can only edit walls in specific patterns to change the walls shape. Confirming an edit also restarts the building process (but doesn’t cost materials), which means that piece will be momentarily weaker while being rebuilt. If you’re looking for a list of the possible shapes and building variations each piece can support, the Fortnite wiki has a list.

Being able to edit quickly and efficiently is key to: navigating a build off quickly, repurposing cover, building exits from your own cover and surprising people hiding in your own buildings. It is almost as important as being able to build quickly. You can also pre-edit a piece before placing it, by using the edit key before trying to place said piece. Finally, you do not need to manually select each grid piece, you can drag your crosshair in the shape over each grid section to complete the shape quickly.

Ultimately, this boils down to the fact that wood is the best in combat and high intensity situations, being the most durable under immediate fire and the quickest to build. Metal is best used before combat begins, prebuilding in a location you wish to hold. Brick is the middle ground, not the best at either, but a decent substitute for both roles. There is no ‘armour’ stat, so metal takes the same damage as wood. Therefore, wood is the most useful combat material and as such the resource you want the most of.

10. Farm the resource rich nodes
None of this matters in the end if you don’t have the materials to work with. Conversely, you don’t want to spend all game farming either as that takes time away from doing other things (like looting and killing) and increases your chances of being spotted by hostile players. Therefore, you want to farm nodes that have good resource investment per time. Wooden pellets, trees with dark bark, thick trees, fences and Moisty Mire trees (these are ridiculous) are all very efficient to farm. Avoid farming for metal or brick, it’s generally not worth the time. Wood is the material you’ll use in the largest quantities by far (and the chests/spoils of wars, will give you enough of the others). Additionally, don’t farm the walls of terrain buildings (as in, the map made buildings) as your return for time spent is very low. Finally, chests drop 30 of a random material type and a Llama Pinata drops 500 of each, so loot these (as if you wouldn’t) as much as possible so you don’t have to spend more time farming.