Fleabag and the Hot Priest Phenomenon

I'm not quite ready to move on. Are you? 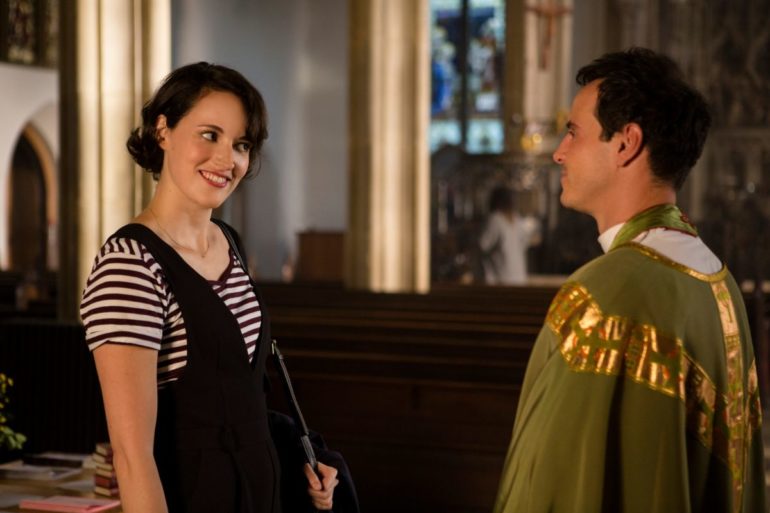 The ending of season 2 of Fleabag broke my heart, absolutely devastated me till I was a weeping mess on the cold, hard ground, but this is just a testament to how wonderful the series is. It’s not just about the romance or the hot priest, though that certainly helps, it’s such an authentic portrayal of grief, loss and our dealings with love. You see, our main character Fleabag has lost the people she so ardently loved (her mother and best friend Boo), so she chases pleasure in a definite addictive way in order to displace the pain she experienced from those losses.

This is most evident in our first interaction with her, where she is having sex with a really hot guy, yet it feels empty, and she herself is distracted by talking to us, the viewer. This breaking of the fourth wall technique is regularly employed within the series, and becomes Fleabag’s coping mechanism in her dealings with life. She doesn’t need to put herself out there because she has us to talk to.

Her relationship with her father is strained (though this improves as the series goes on), her Godmother is an awful woman (played with aplomb by Olivia Coleman) and her sister Claire is really the only person she properly loves. Their relationship, on the other hand, is extremely dysfunctional, since Claire has always strived for a sterile perfection in her life, while Fleabag is the incessant screw-up.

Her ex-boyfriend Harry was a safe option whom she didn’t feel great passion for, quite obviously since she masturbates to Obama while he dozes beside her. Yet, she longs for love, as everyone does, even while she puts on the air of being jaded and so over it, she carries within her that hope that one day she will have the opportunity to love someone and be loved in turn. It’s why she sleeps with Boo’s boyfriend, because she envied the love between him and Boo, so much so that she wanted a brief dalliance with it. This cost her Boo, who loses her life in a foolhardy plan to get back the attentions of said boyfriend.

When we begin season 2, Fleabag has a bloody nose, yet turns to us and says, “This is a love story.” The visuals are highly contrary to this statement, but now looking back with the ending in mind, this makes superb sense. For what is love if it doesn’t come with a little devastation? And a love story we received, with Fleabag and the priest sharing instant chemistry at the awkward family dinner, with fun banter that dances the line of flirtation, little touches that burn with possibility.

Of course, the obvious elephant in the room is that he is a priest, who has taken a vow of celibacy, so he is off limits to Fleabag. I think a lot of people have found the idea of him being a priest to be distasteful, since there is obvious transgression at play here, and I get that. But you see, he needed to be someone off limits in a sexual manner, because that is how Fleabag handles relationships. She dives into physical intimacy immediately, so she never has to develop any feelings.

So with him being a priest, there is a true flourishing of companionship, of being with someone who gets you on every level and in every capacity. He is the only one to notice her coping mechanism of breaking the fourth wall, sensing when she disconnects, wanting her to be with him at all times.

As a priest, he is used to offering guidance and leading people away from sin and temptation, but now it is staring him right in the face and he doesn’t know what to do. It is clear that their interactions rattle him, seen in his slightly manic appearance when she runs into him in the church again. He thinks that if he can reinstate himself in her life as someone with priestly authority, he will find his way out from the tempestuous path he is on, which is why we get the whole confessional box scene.

However, listening to her confession only makes him love her more, because she is just as broken as he is, a brokenness he covers with his elaborate priestly garments. Their first kiss together is a build-up of yearning and desire, sin and transgression; it is also a profession of love. Even though he tries to stay away from her after, and she goes back to her usual habit of using sex to self soothe, it is inevitable that they would sleep together.

Because if they never did, he would always wonder, just as she would, pushing the blame onto the celibacy vow for ruining the possibility, or thinking that the forbidden nature of the relationship is what made it so tantalising. They sleep together, and now they both know for sure that it’s love, which is the most heartbreaking thing.

It is clear from the beginning that his role and path in the church means everything to him, especially since he has tasted a life of vice and sin and chose to walk away from it. He loves Fleabag, but it will never rival the hope he gets from serving God. It is through service to God that he becomes the man Fleabag falls in love with; who knows who he was before that, especially with his constant reiterations of his messed up family life.

At the end, as they walk away from each other, even though both are most certainly hurting and in pain, we know that they are better people because of the love they had together. How many people can say that? Fleabag doesn’t need her crutch anymore, leaving the viewer and the camera behind as she walks away to claim her life. The irony is that we are now so cut up from having to say goodbye, because we don’t want to believe that it’s over, even as she waves farewell.

So, to my fellow Fleabag stans, let’s slap a bandage of our wounds and wait the pain out, because one day, hopefully soon because this really hurts, this ache shall pass.