FIRST IMPRESSIONS: Luke Cage – “A Must-Watch In Its Own Right” 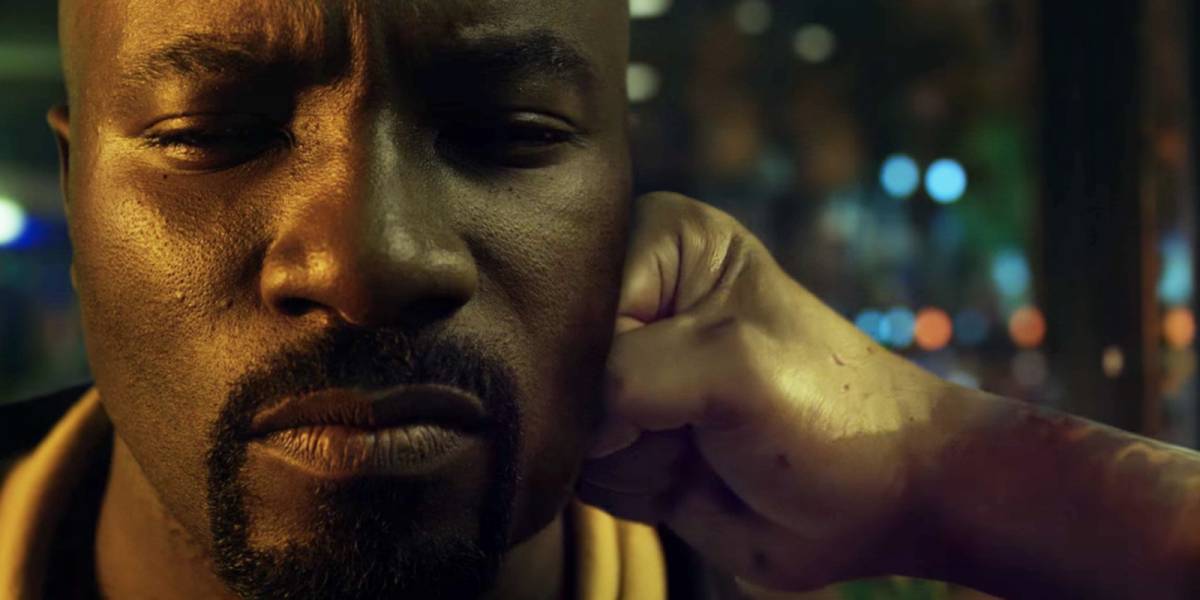 Luke Cage, the third Marvel show to come to life as a Netflix original series, isn’t really about superheroes. Sure, Cage himself has superhuman stuff going on – his skin is impenetrable and he can bend car doors like pipe cleaners- but based on its early episodes, this is a show with a much loftier goal. What Luke Cage really is, is a crime saga aiming for a conversation about where black people fit in modern America.

As just another useless white TV critic, it’s not really my place to say whether it succeeds at the latter. A a crime saga, though, Luke Cage has the characters and setting to make itself a must-watch in its own right.

First, let’s start with who’s who and what’s what. We all remember Luke Cage, yes? From last year’s Jessica Jones? Cage owned a bar and was grieving for his deceased wife. Is it coming back to you? Well, five months after the events of Jessica Jones, Cage is struggling to make ends meet. He’s working two jobs – one in the barber shop of his wife’s old friend Pop, and the other at the nightclub of one Cornell ‘Cottonmouth’ Stokes.

Pop believes in keeping youngsters at risk of turning to crime on the straight and narrow, and he’s been doing it for years. Cottonmouth is his antithesis, all about riding dirty money to the top, and for the impoverished kids of Harlem his way is just more enticing. What’s the point in working hard when you can make a million dollars gate crashing an illegal arms deal? Not that things go exactly smoothly when some of Pop’s boys try their hand at guns and cash filled duffel bags. If crime is a ticket out of the streets, you can bet it’s not particularly fair about what destination it gives you.

The most interesting thing about Luke Cage is the stakes implied by its early episodes. Where Jessica Jones asked how its hero could overcome the trauma of an abusive relationship, Luke Cage dishes up the future of Harlem as its key thematic question. In cahoots with Cottonmouth is his cousin, Councilwoman Maria Dillard, the political mastermind behind efforts to rebuild the borough. She’s the respectable, public face of his arms dealing enterprise. Or is he simply a cog in her wider plan to revitalise Harlem? It makes for an uncertain dynamic, and hopefully the show makes the most of it.

Where there’s crime, there’s cops mopping it up and Luke Cage is no different. Detectives Misty Knight and Rafael Scarfe aren’t yet pushing the story forward like the rest of the cast, but their conversations and perspectives hint at future twists and turns.

How does all of this hold together then? Putting a dozen ideas into a pot, stirring then seeing what happens can easily lead to messes like Amazing Spider-Man 2. Luckily, that’s not what happened here. The writing is sharp but natural, something that’s easy to overlook until you remember how many shows get it wrong. Most of all though, the cast and the world they occupy feels real.

Mike Colter is even better as Luke Cage than last year. Not only is he a huge, looming presence on screen, he makes Cage fit far more comfortably into his new surroundings. And when he needs to be intense, he brings it.

Mahershala Ali as Cottonmouth and Alfre Woodard as Dillard meanwhile bring a refreshing dynamic to the show’s main bad guys. Do they really care about each other as family? Or is it just a partnership of convenience?

Frankie Faison as Pop and Frank Whaley as Detective Scarfe also turn in solid performances, but Luke Cage‘s other major stand-out is Simone Missick as Misty Knight. Missick makes Knight likable, smart and strong with only limited screen time, but it’s her chemistry with the rest of the cast that gets her a special mention here.

Like all the Marvel Netflix efforts, Luke Cage gives us the same New York of well trod sidewalks, intricate alleyways and run down apartment complexes. As usual though, this time it’s from a slightly different angle and in many ways Harlem itself is a character, Pop and Cottonmouth the two extremes of its personality.

Which isn’t to say this Harlem is always believable. The bad guys’ criminal operation does at times come off as a little transparent – at one point Cottonmouth pops up for a chat with his cousin in public, the TV news crews on hand to interview her apparently oblivious to any dodgy dealings. It’s not something that pulls you out of the show, but too much more of it could wear out believability.

On the action side of things this is definitely more Jessica Jones than Daredevil. Elaborate choreographed fight scenes through sepia lit corridors is a Matt Murdock monopoly, apparently. Which isn’t to say we don’t get to see Luke Cage do superhero stuff. You’ve seen the trailer, you know how Power Man deals with business.

At this point, Marvel’s Netflix projects have settled into a rhythm. Always the same great writing, interesting casting and street level New York, but for each new outing we get a different lens from which to view things: Matt Murdock’s Catholic guilt vendetta, Jessica Jones’ alcohol fuelled battle with Kilgrave, and now Luke Cage’s Harlem, teetering between hope and corruption. Sooner or later one of those lenses isn’t going to work, but it’s not this one. Luke Cage’s Harlem is not resting on its laurels. It has its own story, and it’s a good one.