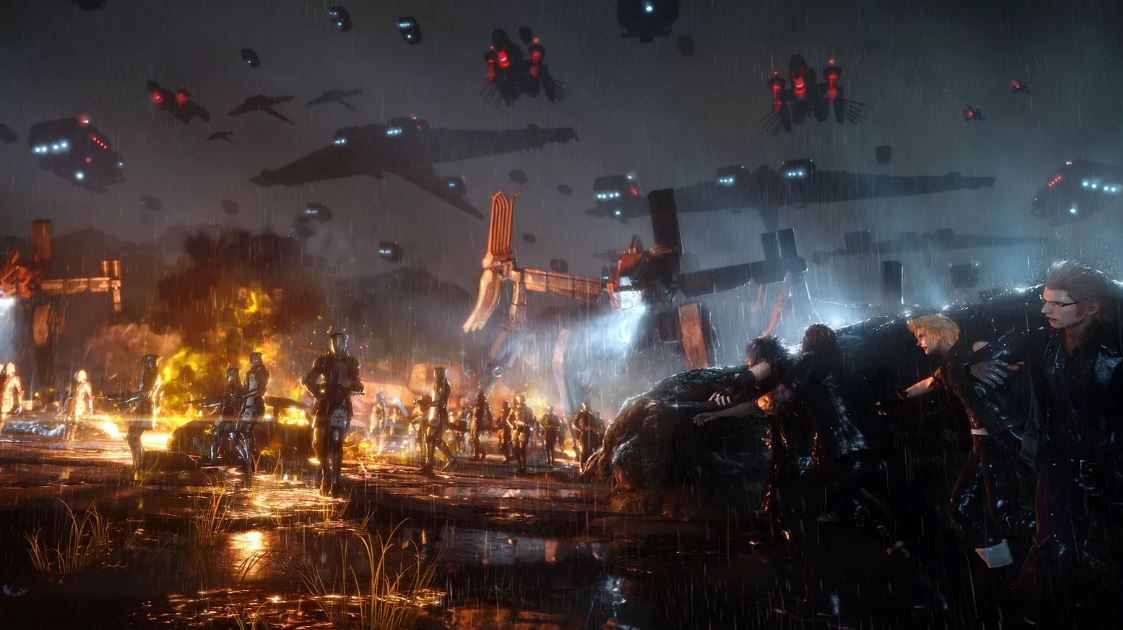 The Final Fantasy series remains one of the most talked about series’ in the gaming world. Final Fantasy VII and Final Fantasy IX were maybe my favourite games growing up as they allowed me to step into a fantasy world to explore filled with danger and amazing characters for me to get to know and develop.

Final Fantasy XV has taken 10 years to make, with rumours of development starting in 2006. It has been a rocky developmental road for Square Enix. Originally billed as a spin-off for the Playstation 3, it quickly fell by the wayside and was picked up again by the team that created the critically acclaimed Kingdom Hearts series.

It was hit with development snags early on and when the Xbox One and Playstation 4 was released, they decided to hang fire and release it on the next generation consoles due to the sheer scale of the game they were making.

Over the next few years, we received little to no information on its progress until E3 2016 when we were shown the first game trailer and a demo on the brand new fighting system. I’ll admit, I was a little dubious but as a diehard fan of the other games, I badgered my other half into getting it for me.

The story follows Prince Noctis and his three friends: Gladius, Prompto and Ignis and they travel to another kingdom so Noctis can marry his beloved Lunafreya. Whilst they are enroute to the wedding, Noctis receives word that his kingdom has been betrayed and the Crystal has been stolen. Noctis must now take up his birthright and travel the length and breadth of the land to obtain ancient weapons that will grant him the power to overthrow the great evil in the land. To do so, you must travel around in a pretty funky looking sports car and take on some giant enemies in some truly amazing fights.

The biggest thing is the game world and just how pretty the environment itself looks graphically. Every tiny detail has been picked out from the physics of the main characters hair when the weather changes to the details of the car engine when you are performing upgrades. I have always said that people won’t mind waiting for a game if it looks this amazing when we play it.

One of the big things that put many people off playing this game was the new combat system. The turn based system has been scrapped and instead we are given a free flowing system where the characters and enemies move independently. This is one of the biggest things that I was worried about, and although it does take awhile to get used to, I was eventually extremely impressed. Combat now feels tense and so fluid that you can’t always bank on the same strategy (in my case, it was pummel the enemy with my strongest character when playing the other games). You must try and utilise each of the unique skills your companions have in order to take advantage of the enemies weaknesses. This made levelling up a lot less frustrating and boring and made me want to explore more of the world.

On the other hand, levelling up has become slightly more irritating. In order for the EXP earned during gameplay to level up characters, you must make camp. This can be a little irritating as sometimes you are in the middle of nowhere and the furthest point possible from a campsite. If you die without uploading EXP, then you lose a percentage of it. Also, you must earn AP to buy different skills, but this is so vague that some of the time I wasn’t even sure who I was purchasing abilities for.

Aside from the main quest, there are also a number of optional side quests you can take part in. These include minor missions for some of the NPC’s to earn upgrades for your car or new bits of gear and Noctis can now enjoy a spot of fishing (bizarrely) and Ignis can learn new recipes to cooks a meal when you make camp.

As with any Final Fantasy story, we have a cracking protagonist and a sinister antagonist that take us through the main plot of the game. What I did find is that XV lacks the storytelling abilities of the other Final Fantasy titles. I felt no real attachment to any of the characters and I wasn’t as compelled by the story as the others. However, the finale of the game was simply mind-blowing and I was taken aback by the direction the game had gone.

Although I was a bit concerned at first with the newest instalment in the Final Fantasy series, I really enjoyed playing XV. It is not as lengthy as the others and the storytelling isn’t as good, but it makes up for that with the amazing graphics and new combat system.