FIFA 23 Ultimate Team: How To Change Wingers Into Strikers 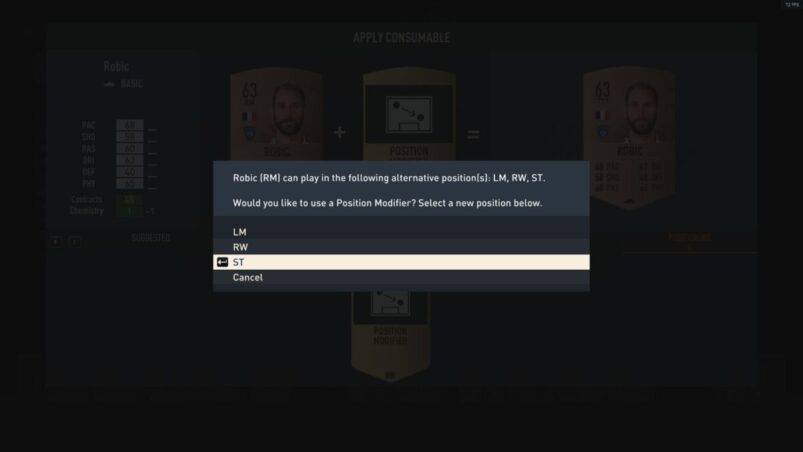 FIFA 23‘s Ultimate Team is one of the best versions of the massively popular mode yet, with so much content to play and cards to pack. You can customise so much on and off the pitch, but is there any way of changing your wingers into strikers in the game yet?

The answer is yes, you can change your wingers into strikers in FIFA 23. However, it all depends on if a particular winger has ST or CF listed as an alternate position on their card. Dejan Kulusevski, Lorenzo Insigne, and Wifried Zaha are just a few of the notable wingers in FIFA 23 who can be turned into strikers.

You can see which wingers have alternate positions either just by looking through the card or by trying to apply the Position Modifier consumable to them and seeing which options become available.

You can earn the Position Modifier consumable by opening it in packs or from purchasing it off the market. You can also do the opposite and turn some strikers into wingers, like Mbappe.

While this compromise might be a pity to some players, it does help to balance things a bit, otherwise the typically very fast wingers would dominate the game when converted into strikers. There’s nothing more frustrating than just not being able to catch a fast player who’s broken your back line.

However, it’s worth bearing in mind that just because you can’t change all wingers into strikers, it doesn’t mean that you can’t play them up front anyway. While your chemistry will obviously take a sizeable hit, if you have enough chemistry spread out across the pitch and everyone else is in the right position, you will likely still be able to hit close to max chem.

READ NEXT: FIFA 23: How To Use Stadium Player Celebrations In FUT