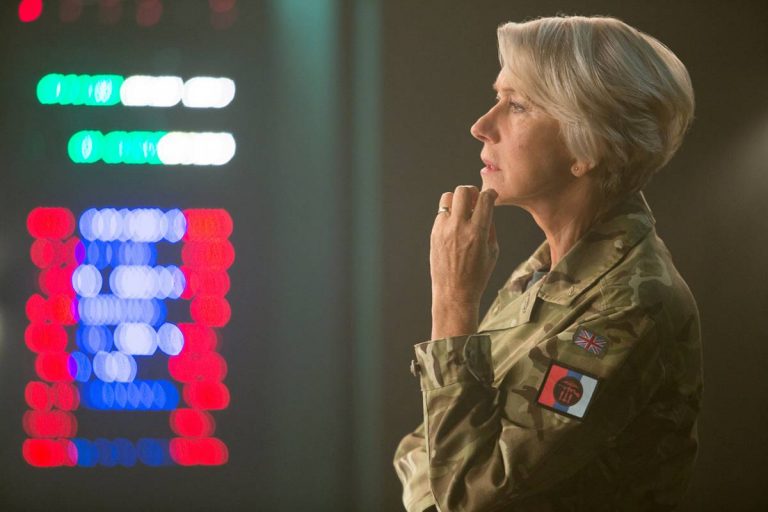 Eye in the Sky

A runaway train is speeding towards five people tied to a railway line. You are standing on a bridge, and you know that pushing something heavy in front of the train will stop it and save the people’s lives. Unfortunately, the only heavy thing in the vicinity is a very large man standing next to you. Do you push him onto the tracks? In other words, can murder be justified for the greater good?

A similar dilemma is at the heart of Eye in the Sky, a tense thriller about the ethics of drone warfare, directed by Gavin Hood. The film follows a British-led operation to capture high-ranking members of the terrorist group Al-Shabaab in a safe house in Nairobi, Kenya. Co-ordinating the mission from London is the icy Colonel Katherine Powell (Helen Mirren), supported by her eye in the sky, a Reaper drone piloted from Nevada by Lieutenant Steve Watts (Aaron Paul), and her eyes on the ground in Nairobi, undercover agent Jama Farah (the excellent Barkhad Abdi). When it becomes clear that the militants are planning an imminent suicide attack, the mission switches from capture to kill and the order is given to put a Hellfire missile through the roof. But then the drone pilot spots a young girl in a red sari selling bread, well within the blast radius. Is she acceptable collateral damage, if taking out the terrorists could save hundreds of lives?

The film is a real nail-biter and almost unbearably tense in parts, as the military demand urgent action, the politicians debate the legality and the political ramifications, the terrorists suit up and prepare for action, and the girl sits quietly with her bread, little realising that she is being watched on a hundred computer screens across three continents. The tension is enhanced by a pulsing score and a neat directorial trick whereby the camera is always on the move, creeping and swooping menacingly to mirror the video feed from the drone.

A great strength of Eye in the Sky is that it debates the ethics of drone warfare in a highly intelligent manner whilst never allowing this to obstruct the narrative or reduce the tension. It also refuses to take sides, giving equal weight to both arguments but letting the audience decide for themselves. Even now, a day after seeing the film, I’m no closer to figuring out the correct course of action.

Eye in the Sky is also notable for being Alan Rickman’s final on-screen performance, as a Lieutenant General representing the military in COBRA. It was a pleasure to be reminded what a fine actor he was, and he manages to recall both the slowly-enunciating menace of Professor Snape and his bumbling naivety in Love Actually. The rest of the ensemble cast are also terrific, with a particular nod to Aaron Paul as the inexperienced and increasingly ashen-faced drone pilot with his finger quite literally on the button.

In one of the final scenes, Aaron Paul is met by his commanding officer after the mission is over. “Go and get some rest”, the officer says, “we’ll need you again in 12 hours”. It’s a reminder of the surreal fact that drone warfare is a day job, and that people are being assassinated remotely from London and Washington on a daily basis. Eye in the Sky is unlikely to be the last film that explores the ethics of this, but it may well be the best.