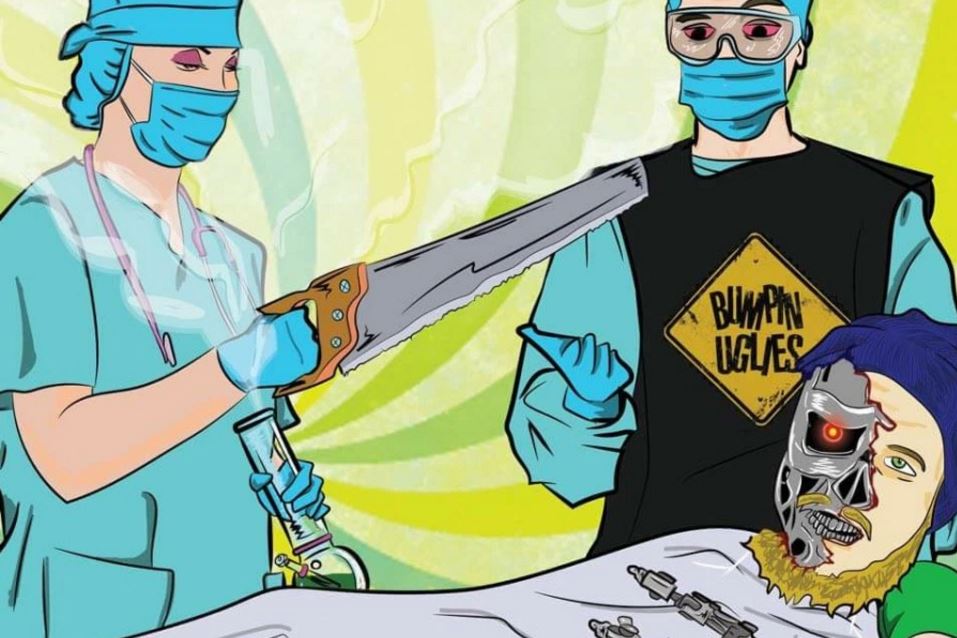 It’s always impressive when a band or artist has musical skill over more than one genre. The competitive nature of the music industry makes it a necessity these days for the musicians working in it to be as versatile and stand out as much possible. Bumpin’ Uglies try to do just that.

From Annapolis, USA, Bumpin’ Uglies are a three-man band who fuse reggae and ska with alternative rock and folk. The band is made up of lead vocalist and guitarist Brandon Hardesty, bass guitarist and supporting vocalist Dave Wolf and drummer TJ Haslett. Since forming in 2008, Bumpin Uglies have built up a discography of two LPs, one live LP and two EPs. They received national attention in their native United States with the release of their 2011 LP ‘Free Candy’, continuing to deliver new music for their growing fan-base, more recently releasing two EPs (‘Freak Out Hell Bus’ and ‘Sublime with No One’).

They are also very active as a touring live band, supporting other bands as well as enjoying their own slots at festivals such as the California Roots festival in 2014. They are said to have a “DIY ethic” and are considered as having a very grassroots approach to building a fanbase, which has proved successful in the US but also gained them international attention recently although they are certainly not mainstream.

‘Better. Faster. Stronger’ is an EP that is essentially the reworking of some of the band’s most popular pre-existing songs. The songs on the EP regularly alternate between reggae and rock, featuring two songs that are mostly acoustic. The first song on the EP is ‘White Boy Reggae’ which kicks off with a nice, mellow beat that aims to stay true to reggae. To great irony however the song is lyrically a somewhat cringe-worthy confession by the lead singer about how he loves reggae but is the furthest thing from being a Rasta. At a glance, this song is what happens when you put reggae instrumentals over alt-rock style vocals. Hardesty has a habit of performing guitar solos in this EP that actually significantly supports the EP’s sound. The first half of this song was a bit difficult to listen to but the second half of the song redeems it to a certain extent, mainly due to Hardesty’s spoken-word flow improving and his guitar solo near the song’s end. It was hard figuring out whether this song is a joke or whether it is just brutally honest on Hardesty’s part.

‘Addictive Personality’ was one of the more-catchy songs on the EP. It opens with an alternative rock style that quickly switches to a slower reggae beat in time with Hardesty’s vocals. The song’s mood is pretty upbeat even though its lyrics are slightly depressing when you actually listen and think about them. Hardesty boasts a better flow in this song as well as being able to touch on singing styles belonging to both reggae and alternative. song significantly gains momentum near the end of it, abandoning the reggae sound in favour of a return to rock, with the fast pace sounding similar to country rock in its final moments. Overall, this was one of the EP’s stronger tracks. ‘Morning After’ is its strongest however.

Beginning with a slow tempo, the song is briefly carried by Hardesty until Haslett’s drumming kicks in and helps lead the song into a nice mellow, reggae ballad. Hardesty’s singing voice is truly at his finest in ‘Morning After’. He makes a clear attempt at embodying the sound of a traditional reggae singer with his singing style and lyrics. Hardesty is also proficient in his use of spoken word and his somewhat skilful flow is evident, particularly near the end of ‘Morning After’. The thing that really caught my attention was Hardesty’s powerful guitar solo that featured in this song. It could be argued that Hardesty is actually a better guitarist than a vocalist.

‘DIY’ is probably the biggest contender to ‘Morning After’ in regard to quality, although it is quite different. It has a more sombre tone, evident by Hardesty’s style of guitar playing. The slower parts of this song feel more like folk than reggae and have an almost ‘western’ feel. This song stands out compared to the other songs in the EP due to its style and tone. I personally like the lyrics in this song more than the other songs on the EP.

However, the EP’s two final tracks (‘Live Your Life’ and ‘Get Back’) sound too similar, although they make a noticeable contrast from the previous three songs due to their soft acoustic sound and noticeably have less of rock or reggae focus but sounds more folk and is considerably quieter. It is largely acoustic and this combined with Hardesty’s pop-like singing style for this song would make it understandable for you to mistake Hardesty’s vocals and guitar playing for that of Ed Sheeran’s when it comes to style, at least in this song. The lyrics in ‘Get Back’ are noticeably weaker than ‘Live Your Life’. Although Hardesty is a decent singer, his lyrics in this song felt like a major blow to its overall quality and made it sound quite generic throughout. In all honesty, this was probably the hardest song on the EP to listen to.