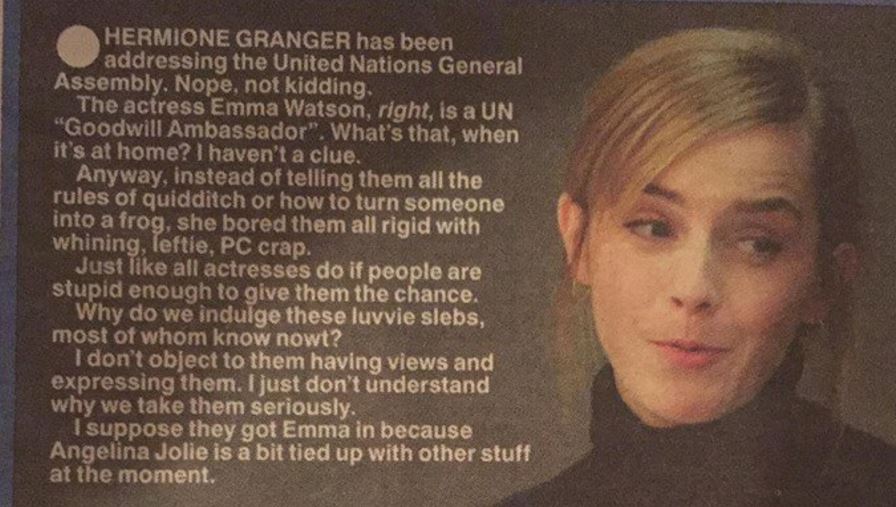 Emma Watson is internationally respected as an intelligent and compassionate woman, an inspiration for smart girls both in her Hermione Granger character and in her actions outside of the Wizarding world. The Sun, however, is nationally recognized by all Brits with more than half a brain cell, as a publication that would be best used to soak up vomit and urine outside your local boozer full of middle-aged racists and those that like to ‘just tell it how it is’.

In a recent publication, the glorified piss-rag dedicated space to the opinions of your typical ‘Why is everything so politically correct?’ bigot Rod Liddle, whose name, ironically, sounds like a cavemanish way of saying ‘tiny penis’.

Before sparking his hateful miniature rant against the actress being selected as a Goodwill Ambassador, he openly admits that he doesn’t know what that is. It’s an ambassador for goodwill, Rod. Or if that isn’t clear enough, it’s somebody famous, who uses their position as a platform to help promote campaigns and causes. He goes on to ask why people listen to famous actresses – could it be because they’re famous actresses, perhaps? Is it possible that people are perhaps more interested in what a famous actress has to say than a bitter nobody who writes for The Sun?

According to Liddle, Watson should have been speaking of ‘the rules of Quidditch’ and ‘turning people into frogs’ rather than getting involved in politics. In that case, perhaps he should be in the pub with Nigel Farage, chasing out non-nationals with a cattle prod and having pints thrown over him by women, as that is the only character I’m getting from him. A quick Google search backs this up. Accusations of racism and misogyny abound.

Watson actually spoke about sexual assault and issues affecting gender equality. Or ‘whining, leftie, PC crap’ as Liddle calls it. Whilst Watson could spend hours explaining the rules of a fictional sport and it would be infinitely more interesting than reading the ‘unique’ views of a crusty old white misogynist – in reality, she stopped playing Hermione about 5 years ago, around the same time that Liddle caused a magazine to be prosecuted for his article on a murder trial which breached reporting restrictions.

He says most of these celebrity ambassadors ‘know nowt’, but Watson graduated from an Ivy League university with a degree in English Literature, so I reckon she probably knows a fair few things about gender inequality. Along with, you know, actually being a woman and undoubtedly having experienced some of the women’s issues she speaks on. Perhaps if Liddle had studied literature or even read a history book once in his life, he might understand the irony of his pathetic attack on Watson – the fact that women are constantly getting shot down for standing up for what they believe in highlights the need for campaigns which are endorsed or represented by popular female celebrities.