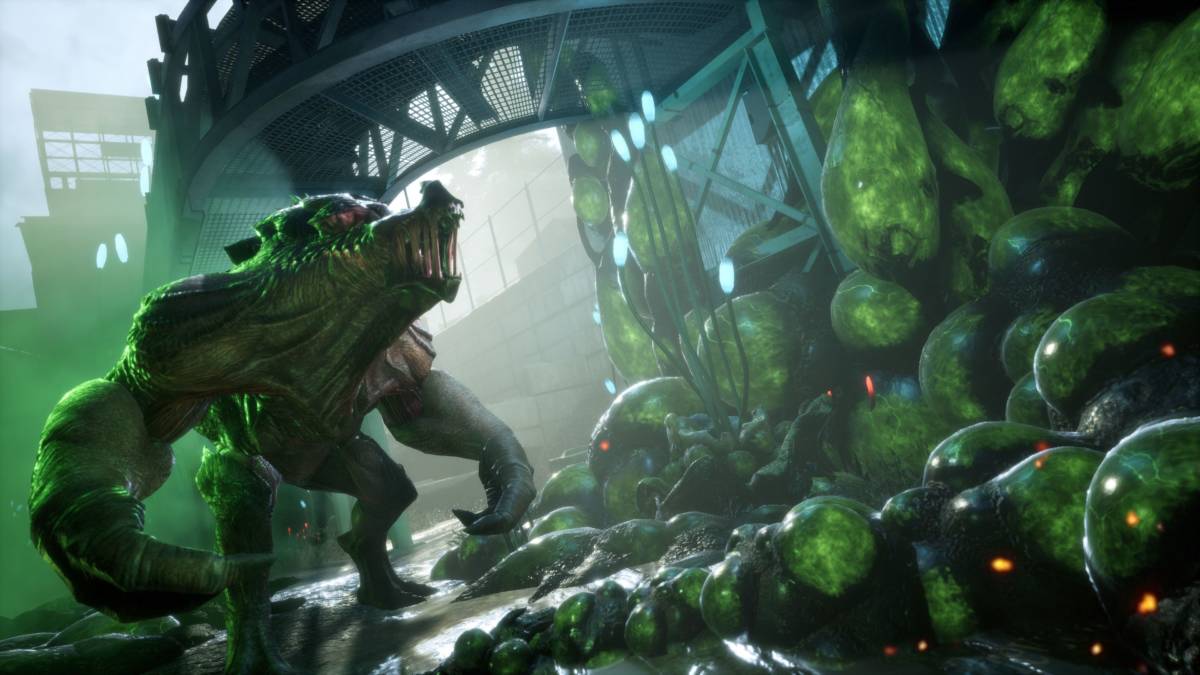 It would take a better, more creative writer than myself to discuss Earthfall, the Early Access co-op shooter graduate, without comparing it to Left 4 Dead. Valve’s zombie classic is almost inseparable from the idea of teaming up with three buddies and taking on waves of mindless enemies, but with the giant now focused on easy money over game development, there’s been a huge void left behind for a third game in the franchise.

Enter Earthfall. And Vermintide 2. And World War Z and Overkill’s The Walking Dead later in the year. If you don’t take an opportunity to listen to the desires of fans, someone else will swoop in and gladly oblige them instead. Does Earthfall take its shot to fill a Left 4 Dead-sized hole, or does it feel as alien as the many enemies you’ll be wading through? 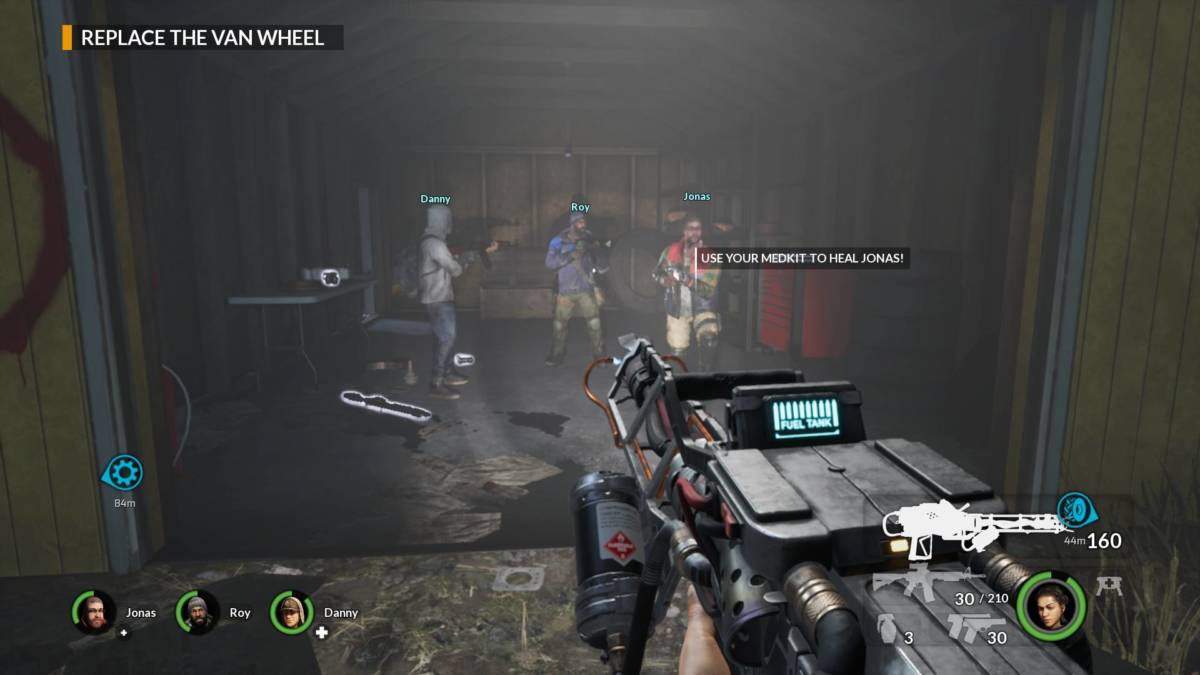 It’s somewhere in the middle. While it will no doubt appeal to anyone who’s poured hundreds of hours into replaying No Mercy over and over again with friends, its technical limitations and general lack of gusto means that it will almost certainly not last the distance quite like its most obvious inspiration. In fact, it may just make you want to dive into Left 4 Dead again to see how it’s meant to be done.

You and your ragtag bunch are some of the only survivors of an alien invasion and must band together across two campaigns of wildly differing difficulty to take the fight back to them. It’s a simple premise, so much so that you can just swap out zombies from Left 4 Dead and replace them for aliens and you will have Earthfall all figured out. However, nobody plays L4D expecting a Kenneth Branagh production and it’s the same thing for Earthfall. You’re here to shoot all of the bullets at all of the things. 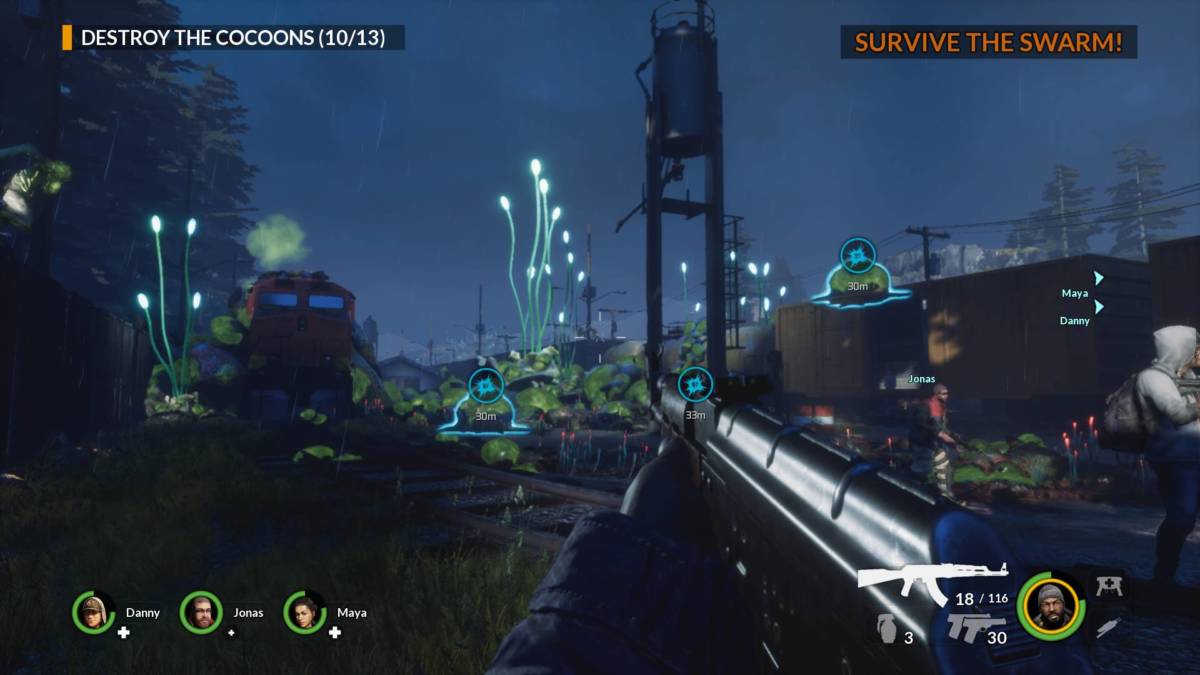 You play as one of four characters: Rory, Danny, Jonas, and Maya. There are no real differences between each of them apart from their personalities with Jonas, the sarcastic buffoon, probably being the most affable of the bunch. They each have their backstories, but they’ve been relegated to scattered in-game chat and the lore section. That might be a stickler for some, but again: you’re just here for the death.

The gunplay, while competent, is never particularly empowering — unless you get your hands on a gatling gun, it can feel a lot like handling some rickety toy guns. A standard pistol is your default weapon and the one gun in the game that you will be most familiar with. The distribution of ammo is somewhat lacking in Earthfall, meaning that each member of your squad is unlikely to be equally tooled up. 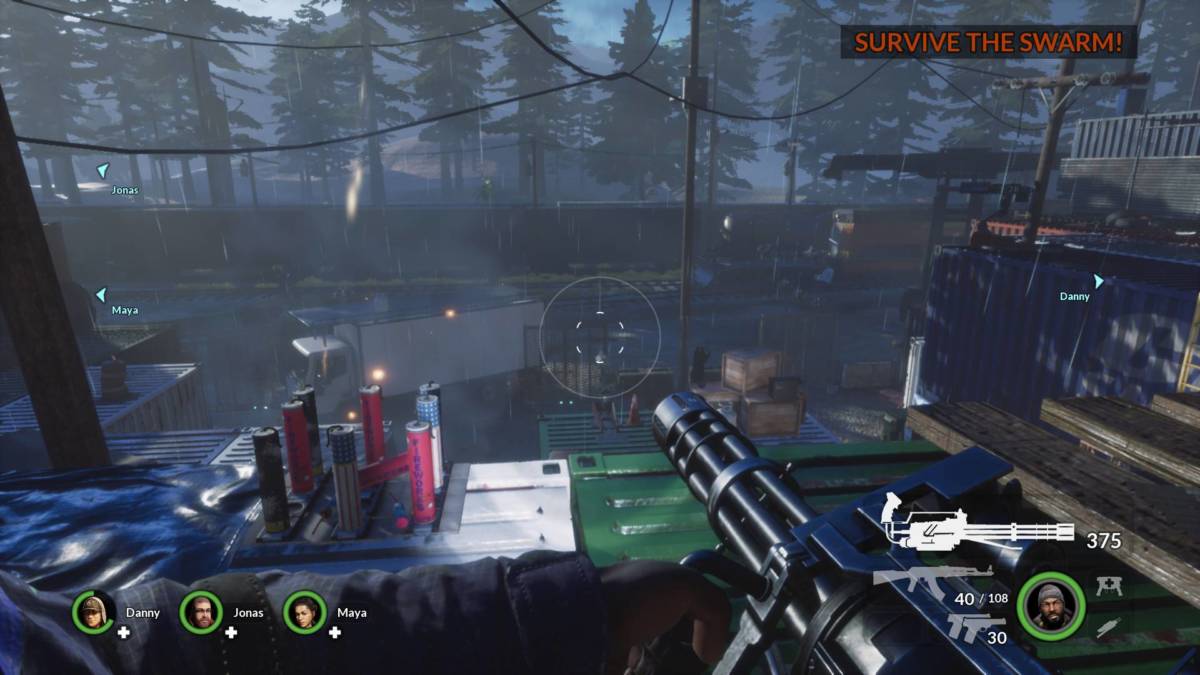 The primary weapons you come across, whether it’s inside a supply crate or just strewn near a remnant of humanity, are best reserved for the many swathes of enemies Earthfall seemingly mindlessly throws your way. There’s no real logic to any challenges you face, it’s as if the AI is on shuffle in regards to enemy density. Sometimes there will just be a handful of drones and other times the game will insist on throwing two powerful enemies at you in quick succession. Considering that they can soak up more bullets than the floor of a Wild West saloon, Earthfall constantly feels like a frustrating chore when the difficulty decides to just randomly spike.

Even on regular difficulty, it’s not easy going. Whether it’s down to it being developed for PC specifically and a more efficient mouse and keyboard setup or just a general lack of balance, Earthfall on Xbox One simply doesn’t find a comfortable middle ground between toil and triumph. It’s not helped by some sloppy AI friendlies, who, even on the most competent setting, have a tendency to act like idiots. If playing solo, they will occasionally land their shots but never help out with objectives or attack primary targets. 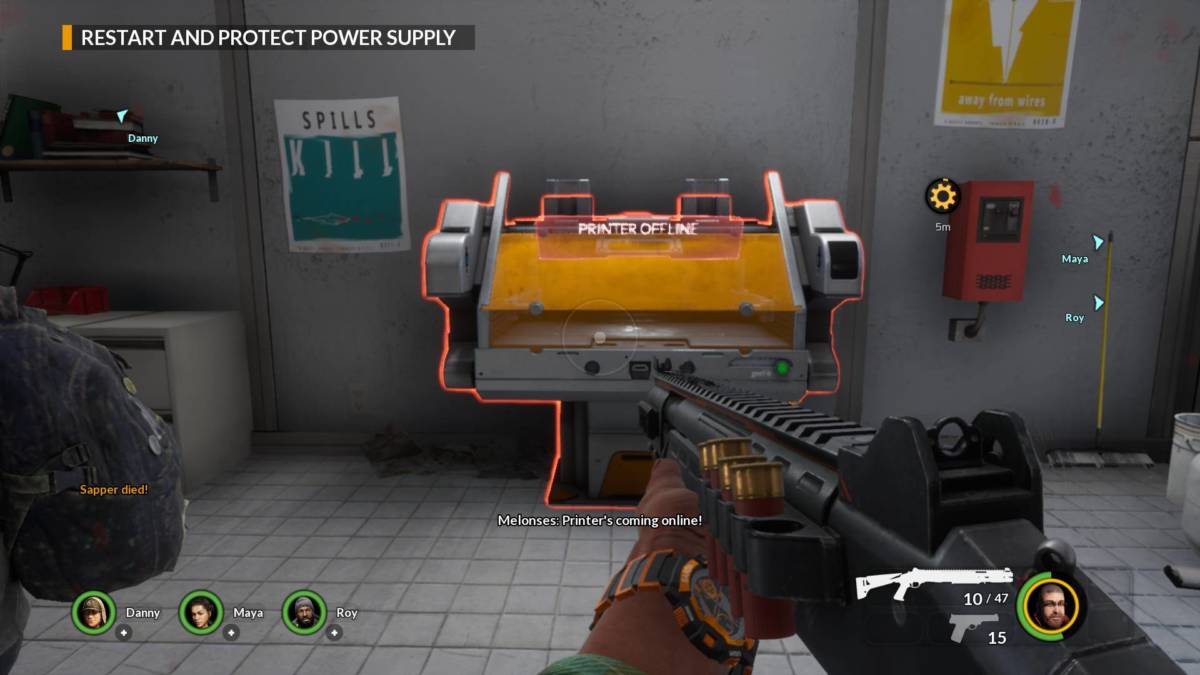 Earthfall’s biggest bads drop during swarms, which are usually triggered by interacting with certain objects, such as a power generator. The Beast is exactly what it sounds, a monolith of an alien with a weak spot on its back that rampages through your team. However, the most annoying by far is the Blackout, a swirling mess of tentacles that just feels cheap. They come equipped with a robust shield and can teleport around the environment, as well as fire near on unavoidable “lasers”. There are a few more notable enemies like these, such as the Enrager and the Sapper, but those two are sure to cause the most headaches.

To help you out, Earthfall has a couple of interesting ideas up its sleeve to stop it from being completely discredited as a Left 4 Dead clone. You can find deployable barriers to temporarily keep the swarms at bay, mountable turrets to cut through them like butter, and even 3D printers to create guns. These quirks do enough to keep things varied, though Earthfall could honestly have all the unique selling points in the world and would still underwhelm, such are its struggles with the basics. 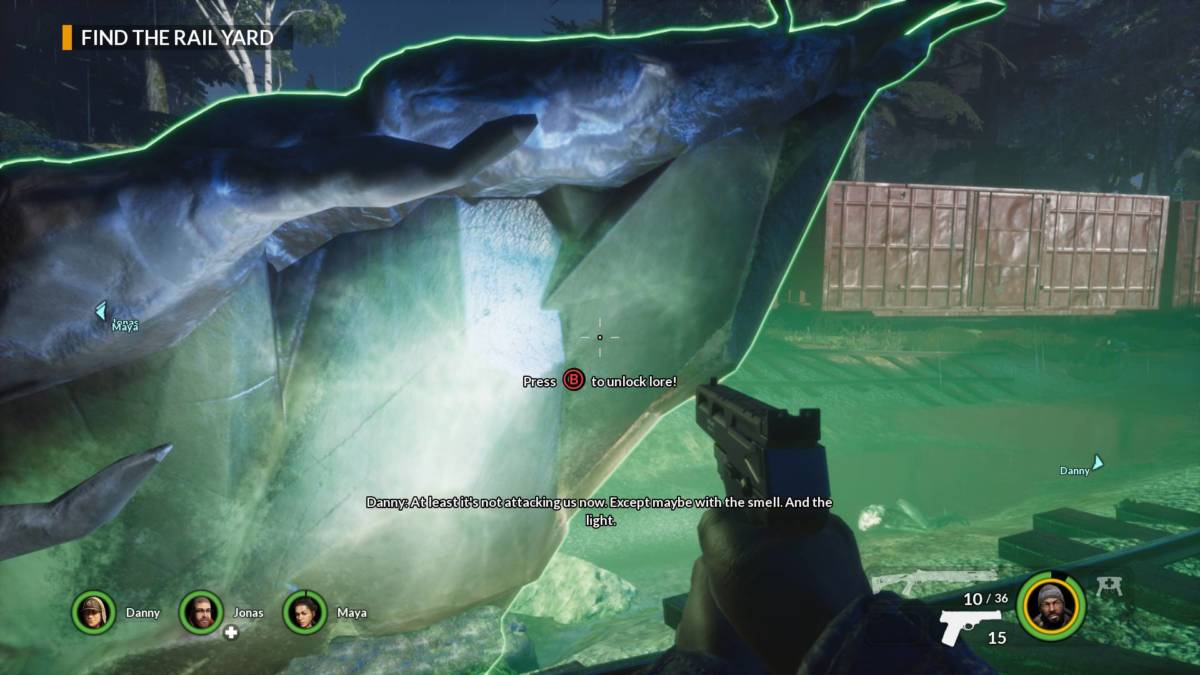 You can allay some of the frustration by playing with friends — if you have a solid network connection, that is. Peer-to-peer matchmaking is a common practice for multiplayer games to cut back on costs, though often at the detriment to stability. My Xbox One is situated a little ways away from the router, but it offers a solid enough connection for most online experiences, ones that are far more intensive than Earthfall. When hosting a match, whoever joined me would suffer from bitty performance and their character migraine-inducingly skittering around. It was better when I joined a match instead, though still a little volatile.

Earthfall also offers a world that’s hard to be pulled in by; environments are drab thanks to muted colours and a general lack of personality from both its humans and aliens. The visuals suffice without ever really threatening to leave an impression. There’s no zest or pep to most of it, despite the characters’ best attempts at being funny. On an Xbox One S, Earthfall also stutters about its business too regularly with significant framerate drops during its busiest moments.

While it may have something to offer co-op shooter veterans, Earthfall shouldn’t be the first port of call for anyone new to the niche genre. Perhaps with some more time in the extraterrestrial oven it could have taken advantage of Valve’s complacency, but as it stands, Left 4 Dead 2 is a far more enticing option, even if it is almost a decade old.

Verdict
Even a couple of interesting quirks can't stop Earthfall from falling flat. Microtransactions: none
5