Donkey Kong Country’s Mine Cart Carnage: The First Hard Level I Ever Played

Gang-Plank Galleon is the best song, don't @ us. 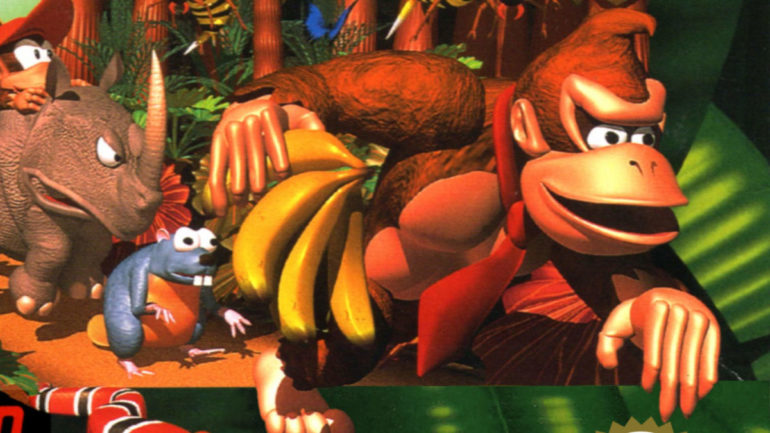 Donkey Kong Country was released in 1994 for the SNES. It has a lot of nostalgic power for many gamers, but it also had a devious milestone early on: in its second world, in only its eighth overall level, lurked a sinister stage called Mine Cart Carnage. Instead of controlling Donkey Kong and Diddy Kong on a standard 2D platforming level, as you had up until this point, the game throws the Kongs into an unstoppable mine cart that demands tight reflexes and memorization that would today be called ‘Souls-Like,’ or perhaps, “Ridiculously Cruel.’ It was also the first time I remember being completely stumped by a video game, and the first time I encountered such a fundamental shift in a game’s entire feel. No more swinging on vines or jumping through barrels, no more idle play and easy-breezy platforming with the big gorilla and his tiny monkey sidekick — I lived in Mine Cart Carnage now.

For the uninitiated, Donkey Kong Country is a classic of golden age Nintendo platforming, and for good reason. Overall its levels are well-designed, cleverly laid out, and full of personality and detail. The soundtrack is also an all-time classic. Early levels were built around the slow accumulation of new understanding around different environmental gimmicks: one level would introduce swinging on vines, another would revolve around bouncing on tires, and another might teach players about swimming underwater. Players could run back and forth in these tightly-constructed levels and take their time getting the hang of these new concepts, so that by the end of a level, they might feel confident in their understanding of each new mechanic.

And then, Mine Cart Carnage happens. You do get ‘introduced’ to the new concept of your characters riding through the level in a mine cart, at about the same rate that a bug is introduced to a speeding car’s windshield. The stage makes two fundamental changes to how the game has functioned up to this point: First, the stage automatically shoots forward at the speed of your cart, a ceaseless march forward that prevents any rest or respite. Second, the mine cart has a different weight from Donkey and Diddy Kong, and jumping in it is completely different. Of all the most devious video game mechanics in existence, adding physics and gravity must rank high on the list. Jumping in the mine cart impairs your momentum, which determines how well or poorly your next jump travels, and the constant shifting of the tracks you ride on keeps throwing new advanced-level physics problems your way. Sometimes floating chunks of track will buckle into a V shape. Other sections are barely as long as your cart, forcing you to jump as soon as you land.

While the first third of the level is all about precise timing, turning the experience into a sort of demented rhythm game devised by Hellraiser, the rest of the level introduces even more hazards. Soon, downed mine carts start dotting the tracks, adding additional obstacles to jump over, and also forcing yet more split-second calculus. A cart parked on the end of a track means timing a jump even earlier than usual, and be careful jumping off a track, lest you see a cart parked right at the lip of the next one. Then, in the home stretch, Krashes — enemy lizards riding mine carts directly at you, starting darting in from just offscreen— one final enemy even waits until after you see the sign for the exit at the end of the level. Whether it’s the tracks themselves, stationary obstacles that blend in with the background, or the actual enemies hurtling at you, this level refuses to let you find even a moment to breathe.

To the modern gamer, this may seem like baseless bellyaching. If done right, a player can complete Mine Cart Carnage in a little over a minute. However, this is a view that benefits from the kindness of history. In preparation for writing this article, I played the level again a few times on the Switch’s SNES library — and I still finished it fairly easily, but did get tripped up by the final Krash zooming out of the exit twice. Consecutively. The little guy’s timing is impeccable.

As a kid, this level felt like skipping to the end of the book. What did this difficulty mean? What wasn’t I understanding? Surely I was missing some context, surely my friend Donkey Kong wouldn’t hurt me like this on purpose! But alas, this was all according to plan. I soldiered on, took my lumps, and eventually limped through the exit at the end of the stage. The level after Mine Cart Carnage is called Bouncy Bonanza, and involves bouncing on rubber tires in a cave. It is a cakewalk after Mine Cart Carnage, as if the game designers were lobbing you a softball after your suffering.

There’s a second mine cart level in Donkey Kong Country, the 31st level in the game, Mine Cart Madness. It is a more dramatic level, with more diverse enemy types and multiple carts you jump into and out of, but overall, it’s a much easier level. The physics don’t defy reason, and for all of the added smoke and mirrors, the level’s layout isn’t as complex. So near the end of the game, Mine Cart Madness feels like a confusing backwards joke. You see that it’s another mine cart level and expect the worst, only to get the gaming equivalent of Joker’s gun that only shoots out a flag that reads “Bang!”

For many, Mine Cart Carnage was a wasteland of lost lives and sunken hours, and many bitter tears soaked the carpets in front of old TVs. Some might say this profound difficulty was meant to test players, to make them prepare for anything else the game might throw at them and take nothing for granted in the strange lands of Donkey Kong Country. But trying to reason with a level like Mine Cart Carnage is like trying to drink the ocean. There may be an answer, but mortal hands can’t grasp it.

Difficulty in games is a thorny issue at the best of times, as proven by the chorus of snarling ‘git gud’ comments that arise every time a major game includes accessibility options to make a game easier to navigate. Donkey Kong Country had no such features. There were no difficulty settings or cheats for extra lives. You got through the Mine Carts on the strength of your wits, or you got a new video game. We’ve come a long way with games as a medium since then, and we’re better off. Imagine if a book stopped you from reading it in chapter 8 because you couldn’t read it fast enough. Playing a game was, in a previous generation, something that involved throwing oneself at the mercy of its difficulty. What you saw was what you got, and you lived with it.

Mine Cart Carnage, so defiant in its difficulty, so brazenly hostile to me, seared itself into my young child brain. In the depths of my tribulations I remember thinking, “I don’t know what this game wants from me,” and realizing it doesn’t want anything. It’s a game. I either beat the level, or I don’t. The realization that the game didn’t care if I succeeded or failed was enough to motivate child-me to accept nothing short of success. If the game didn’t care, I would make it care. Beating it felt like running a marathon. Beating Mine Cart Carnage takes a little over a minute— learning how to beat it takes a lot longer, and living with that knowledge, the pleasure and pain of being pushed back by a video game for the first time, has lasted a few decades.

In the ensuing years I have also learned that there is also a shortcut near the start of the level that lets you just skip the entire sordid ordeal, which is kind of a difficulty option for those that know about it, and while that would have been good to know at the time, I sure didn’t know about it, and there’s nothing we can do about it now. Besides, why miss it? It’s a cool level.

READ MORE: Will We Ever See A New Banjo-Kazooie Game?