Some fine and dandy guidance. 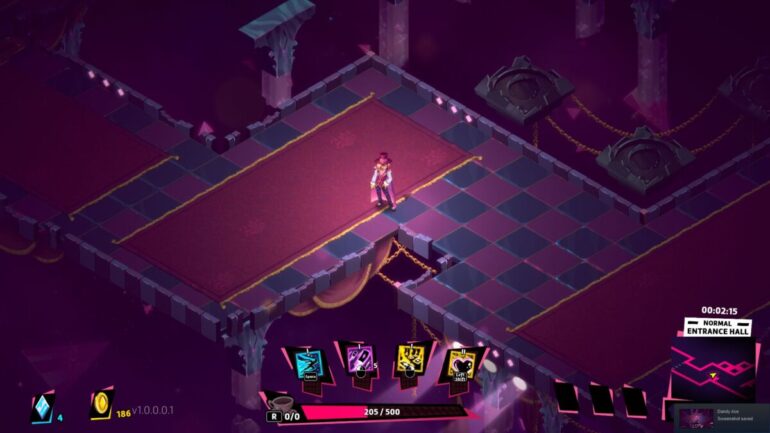 Dandy Ace is the latest release from developers Mad Mimic and has a bit of a learning curve in the early game. With large crowds of enemies to navigate, difficult bosses, and an ever changing arsenal of magic, Dandy Ace has a lot to figure out initially. The way that you decide to navigate the castle and with what magic cards will ultimately determine your entire run. To help you out, I organized a few of the biggest Dancy Ace beginner’s tips that I wished I knew when I first started.

What’s A Magician Without His Cards?

The thing you need to do from the very beginning of Dandy Ace is try every new card you can get your hands on. The cards all have a main effect and an upgrade effect but a card can only be in service of one of those roles at a time. There are some cards that work best as the primary card and others as the upgrade card, while a select few work well in both roles. Here are a few combinations that I found to be really helpful during my playthroughs of Lele’s conjured castle.

Best Dandy Ace Offensive Combinations
Five of a Kind paired with any stackable elemental upgrade card (bleeding, burning, and poison) will allow you to create large multipliers of elemental damage. The best part is that Five of a Kind is one of the first cards you receive so this is a must for early game players.

Twin Daggers paired with Toxic Spray or Crescendo Fireworks will leave two separate stackable elements on an enemy. Twin Daggers can shoot in a straight line without any distance cap–that I could tell–and this makes it especially good if you know where an enemy is across the map. Most other cards can’t reach very far so they can be limited in their use. This combo is a great way to whittle away boss health, especially when paired with Invocation Mastery, which is a trinket that increases condition damages like bleed, burn, and poison. Its effect only grows as Dandy progresses through the castle.

Crushing Hand paired with Spark Tornado helps to make a slower spell more viable. Crushing Hand is one of the most powerful single attacks in the game but it has a short reach and a longer cooldown than one might like when up close and personal with the enemy. Spark Tornado’s “Fast Cast” reduces the cooldown and helps make Crushing Hand a little more user friendly.

Dandy Ace Defensive Combinations
Time Dissonance paired with Black Hole is a great way to control the immediate area around Dandy Ace. Time Dissonance creates a circle around Dandy Ace that slows enemy movement and attack speed, while Black Hole pulls enemies towards the spell. Enemies will be pulled towards Dandy and be rendered useless temporarily as they struggle in time’s grasp. Using this in conjunction with Crushing Hand/Spark Tornado can be very useful.

Spark Tornado paired with Cosmic Vortex makes a risky offensive into a last minute defence. Spark Tornado isn’t that great at dealing with enemies in a concise manner; it often just leads Dandy into more danger, but that’s why it can be a great defensive card. If Dandy is being surrounded by enemies, activating Spark Tornado will begin to hurt the enemies that might be crowding around him, while Cosmic Vortex will create a vortex that deals even more damage to the same area of effect. Players who find themselves surrounded far too often should definitely give it a try.

Of course, these pairings can be even more effective when used in conjunction with other pairings. Make the most of your time exploring the early levels to test out as many combinations between builds and their card effects. There are way more combinations of cards than the ones I have discussed, but these are the ones that I noticed gave me consistent results time and time again.

Blue Cards Are Your Best Friend

You should have at least one blue card in your hand at all times as they will make running through the levels more manageable and allow for more nuanced dodging. However, if you want to break the game a little, you’ll want to make two slots focus on completely blue builds. I found that mapping blue cards that used blink to the A and B buttons on my controller allowed me to use the blink ability back to back. When the upgrade effect had some sort of elemental damage, it could be very effective in dealing damage. Blue card pairs such as this can be used as both a defensive and offensive strategy when used properly.

These pairings not only made me incredibly fast and agile, but also spread elemental damage every time I moved. In fact, when you have the timing down, you can blow through levels with most of the enemies spawning behind you. So if you are trying to beat your own personal time this is the way to do it.

My favorite mono-blue card build uses Escape Artist in the main slot and Toxic Retreat in the upgrade slot. When the blink ability is used, cards deal out elemental damage and do an area effect that stays in effect, even after repeated uses. If you are lucky enough to have two of these builds during your run, the levels will be completely under your power and the Lele’s minions won’t know what to do about it.

Blink in general is way more useful in avoiding last minute enemy attacks compared to dashes, but all blue cards are valid and will make a significant difference between a successful run and a failed one.

Grinding is a part of the roguelike genre. There are times where you might need to grind because you aren’t quite able to take Lele down amid his spammed magic attacks without a little more firepower. Luckily, there is an incredibly easy path to grind and it’s easy to replicate once you realize where the locked gates lead.

The best path to take through the castle for early grinding purposes is through the Banquet Hall, Art Gallery, Axolangelo’s Atelier, Guest Lounge, and Palace Shop.

The main point of this is to guarantee that you fight Axolangelo because he is the easiest boss in the game. While Scissorella isn’t that much harder, she does send enemies at you that, unlike Axolangelo’s paint, will slowly move and follow you around, which makes map management more taxing.

The only caveat with this path is that you will never find all the keys if you stick to it. You will only find half of them, which will restrict your exploration of the rest of the castle. However, in the short term, so you can start collecting lots of shards, it’s the best method. Bosses give a lot of shards so beating them is easily the quickest way to unlock everything.

That build that has been so influential in your clearing the first three stages? It will in all likelihood be next to useless during the boss fight. One of my favorite strategies was taking a card like Dancing Wand that hits multiple enemies and pairing it with a stackable elemental card. The result was that entire levels would burn from Dandy’s wand hopping around the stage, but trying to fight Axolangelo with that build will only lead to failure.

The wand is slow and only does damage to an enemy once per cast before hopping to the next enemy. Since there is only one boss (usually), the Dancing Wand becomes next to useless. I tried to change my build setup in the stage directly before the boss but if I was worried I wouldn’t be prepared, I would try to equip cards that work well as both primary and upgrade cards. Examples of these cards are Twin Daggers, Shooting Stars, and Dio, the Bat. They might not be optimal all the time but they are great to have in your back pocket if there is nothing better at hand.

The entire premise of Dandy Ace relies heavily on your ability to make the most of the different card combinations that are available. I still have one or two cards that need to be unlocked so I know there are combinations I haven’t even considered, let alone the combinations that I cast to the side because they didn’t fit my specific playstyle. Experimenting is required but you’ll quickly find the cards that you prefer over any other. Once you find the magic that suits your style, you can truly begin to perfect your performance and bring down Lele, The Green Eyed-Illusionist.

READ NEXT: 50 Best Indie Games of All Time