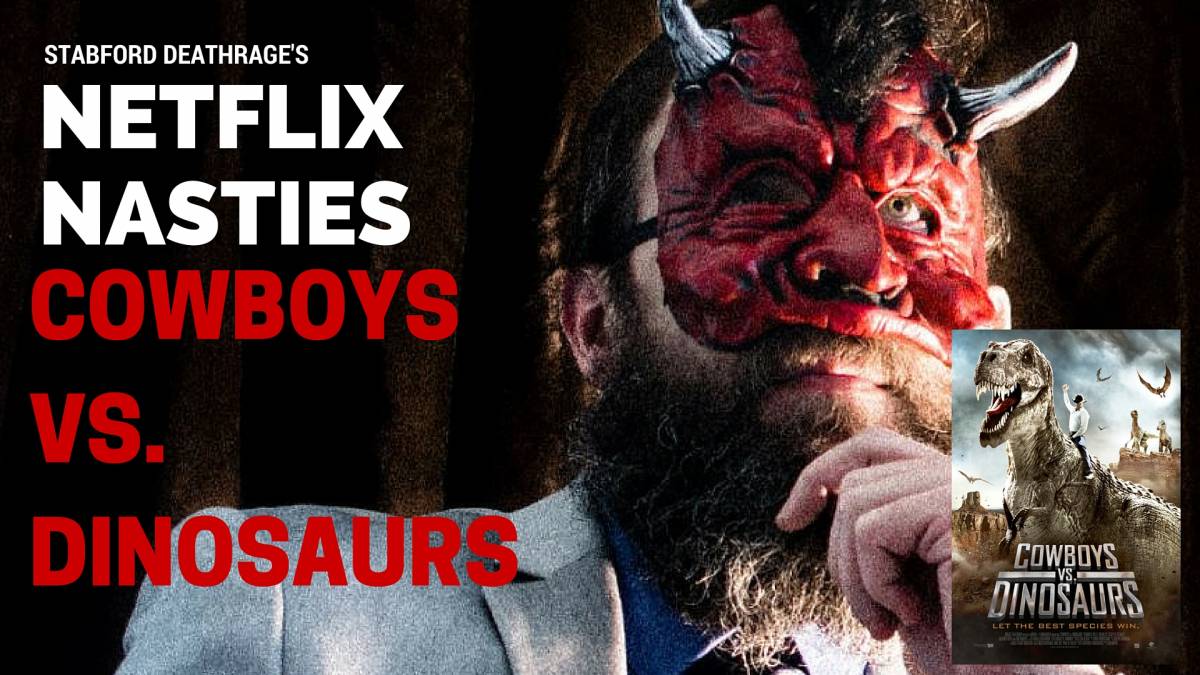 An explosion causes the reappearance of dinosaurs in a western mining town in this not-especially horrific horror film.

An injured rodeo cowboy has the feels. Suddenly, there’s a halfhearted bikini swim in a lake, and after a Wilhelm scream, some of the bikini girls are unconvincingly killed by a CGI dinosaur. Then there’s a lengthy and tedious love triangle over ribeye and coffee cup polishing.

After threatening to do it ‘raptor-style’, disposable characters involved in an open-window May-December romance are killed within their home ‘raptor-style’ by a bloodthirsty, yet surprisingly tidy, CGI raptor.

Later, back at the mine, someone says that ‘clearing the rubble for survivors will take months’, but survivors don’t often survive for months in rubble. They’re usually called victims long before that.

A cowboy carrying a radar detector while claiming it’s a methane detector says ‘gothic ranch action’ to a CGI dinosaur that doesn’t seem to cast a shadow. I’m not sure why any of that happens.

The rodeo cowboy meets his vomiting father in jail although they don’t seem to recognize one another.

After a lot of bickering, men in white suits carry canisters marked ‘explosive’ like they’re extras in a Looney Tunes cartoon. They blow up the mine, which unconvincingly collapses, then unconvincing dinosaurs attack locals unconvincingly folding laundry at the local laundromat.

Suddenly, the sheriff on horseback lassos a dinosaur, and not a moment to soon, because the film needed some cowboy shenanigans to justify its title. Then the buxom female scientist with little to say or do punches the villainous mine owner. It’s not very interesting.

Suddenly, the gassiness of the dinosaurs makes them susceptible to flaming arrows, and they explode into unlikely dinosaur fireballs.

In spite of all this, Cowboys Vs. Dinosaurs is pretty boring. There are a couple of cowboy hats and one horse, and if these things didn’t appear, the movie would’ve been called ‘Miners Vs. Dinosaurs’ which would’ve made the film only slightly less interesting.