Davy Roderick makes a Bruce Springsteen spin on a Bee Gees classic his cover of the week.

I’m reticent to say that Springsteen is in the midst of a renaissance or some form of resurgence due to the fact that (excusing a spell in the 90s) critical and commercial interest in the Boss has never really diminished, and in fact only grown. Today he stands as one the great musical legends and luminaries of our time, loved, respected and admired by all.

As if that wasn’t enough Springsteen in no way has ever rested on his laurels and relied on his nigh impenetrably strong back catalogue, he is always trying to break new ground and push the envelope on what it means to be an artist. At 64 years old Springsteen is still one of if not the greatest and hardest working live act in the world, tirelessly performing marathon shows clocking in at three to four hours and is still producing great studio work such as 2012’s Wrecking Ball and this year’s High Hopes, these albums have all the passion and virility of the young man he once was, but now with an added wisdom and gravitas. 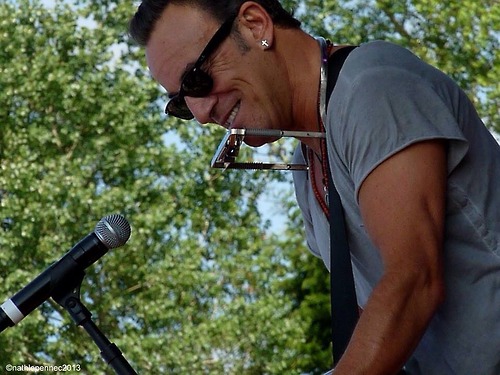 This astoundingly cool cover of the Bee Gee’s Stayin’ Alive made famous by the film Saturday Night Fever was performed in Brisbane in late February; the final date of his recent much celebrated and talked about tour, hitting up South Africa, New Zealand and Australia, many of the cities on the tour for the first time. During this run he performed an extraordinary 129 different songs over 13 nights. Including a fantastic string of interesting and idiosyncratic covers tailored to each gig ranging from Free Nelson Mandela in Cape Town to an Eddie Vedder featuring Highway to Hell in Brisbane to a stripped down version of Lorde’s Royals in Auckland.

Springsteen begins this cover in near total darkness with just him on an acoustic guitar accompanied by a smooth trumpet. The crowd are unsure what song he’s performing until he comes in with that iconic first lyric. Backing singers chime in on the first chorus and then suddenly the song explodes with complete horn and eight piece string sections, along with a blistering solo from tour and latest album guest the fantastic Tom Morello this rendition is a complete reimagining of the disco staple.

In an interview with Rolling Stone the Boss had this to say about his rendition of the Bee Gees classic:

“We said, “Who’s the biggest Australian act in the world?” The Bee Gees. On my playlist I have a huge disco section — I like disco music from the Seventies a lot. The Bee Gees made great records and “Stayin’ Alive” was simply a great song. The lyrics are in our wheelhouse. I told Steve [Van Zandt], “Tomorrow night, ‘Staying Alive,'” and he goes, “You got me on that one. I don’t know how we’re gonna do it.” And Tom Morello said, “I don’t want to have any other ideas. Because I want to see how you’re gonna pull that one off.” Steve’s going, “I can’t imagine it.” I go okay, I’m not going to be able to sing it where they sang it, so I have to think about Marvin Gaye on What’s Going On and Trouble Man and I’m thinking of blaxploitation pictures. I thought, if I bring this thing down to my key and I play it like a blues, this is inner-city blues; it could slip right on to What’s Going On. I had to find my voice in it. I got the lyrics up on the computer and just started to sing it. When it sounded believable to me I knew we’d be fine. It was like, “Okay, I can be this person in this song.””