Have you watched your favourite comedies to death? Are you looking for something different? Try these. 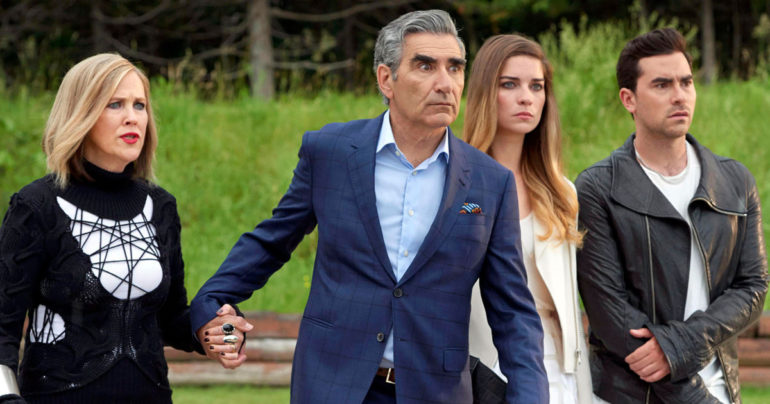 We are very spoiled to have  some of the best classic comedy shows right at our fingertips on Netflix—The Office, Friends, Parks and Recreation, That ’70s Show, Frasier, and many more. And if you’re like me, you’ve watched these series not just once but many, many, many times. (I know, a little embarrassing.) We return to these shows because we know there is a 100% guarantee they will make us laugh.

Why, then, risk trying a new show that may, could, or possibly leave us disappointed? Let me provide you with a bit of wisdom for the day—with big risks can come big payoffs. (And yes, you’re welcome for that sage advice.) So take that risk, and give one of the shows below a try. And since they are all on Netflix, you have them right at your fingertips.

In Schitt’s Creek, it’s kept all in the family – the show’s a collaboration between Eugene Levy (from the American Pie franchise and Christopher Guest movies) as creator and actor, his son, Daniel Levy, also as creator and actor, and his daughter, Sarah Levy. Onscreen, they become the fictional Rose family.

At the start of the show, the Rose family’s mansion and most prized possessions get repossessed by a government agency—their descent from wealth caused by their crooked business manager. Left with almost nothing, the Rose family is forced to move to Schitt’s Creek—the small town they had bought previously as a joke. Now the fun begins. Not for the narcissistic, yet likable, Rose family, but for us, the viewer. We get to witness their shock as they deal with leaking motel ceilings, budgets, and new non-celebrity friends. There are four seasons on Netflix that you can binge watch right now, and Season 5 arrives on Netflix, most likely, in the fall of 2019.

Strong, feisty, and funny describe the three female leads in this comedy. Christina Hendricks (Mad Men), Marietta Sangai Sirleaf, better known as Retta (Parks and Recreation), and Mae Whitman (Parenthood) are the unstoppable trio. The show centers around their characters’ chaotic lives and, in particular, their desperate need for money to support their families. With desperation as their guide, the trio decides to rob a grocery store. What follows is an accidental entanglement with big-time criminals, blackmail, and plenty of badass behavior from the three women. Season 1 is on Netflix with Season 2 on its way sometime in the future.

It’s always funny to watch others obsess over their problems. Why do you think Seinfeld was so popular? In Norsemen, we experience a similar slice of life but with a Viking twist. We have stereotypical Vikings who go on the occasional raid, struggle for ultimate power, and hope to get into Valhalla. We also have not-so-typical Viking behavior with chieftains who question their fear-based leadership style, petty arguments over seat saving on a Viking battleship, and hurt feelings when left out of a social gathering. You can catch Seasons 1 and 2 on Netflix now, with Season 3 on its way later this year.

This British show, created by Phoebe Waller-Bridge, is about a group of young adults living in an abandoned hospital. And like many shows about young adults, there is plenty of, you know. . . sex. And, of course, with sex normally comes sex jokes, which in this show are elevated to a higher sphere with their spot-on placement and perfect delivery.

The show starts with the arrival of Lulu (played by Waller-Bridge), the directionless childhood friend of Anthony (Damien Molony). Lulu has come to tell Anthony that she is in love with him. Unfortunately, there is a big roadblock called Kate (Louise Ford), Anthony’s fiancé. As predicated, Kate is not thrilled to have Anthony’s free-spirited friend in town. She tries her best to conceal her jealousy over Lulu, but, in the end, fails miserably at this. There is only one season of this show; however, Waller-Bridge went on to create and star in Fleabag, another equally witty and original show that you can watch on Amazon Prime Video.

With ominous music playing in the background and murder in the first few minutes of Fallet, you may think you have embarked on a standard crime show. Soon enough, you realize you are watching a part detective/part comedy show. Two detectives, one Swedish and one British, are thrown together to solve a murder in Norrbacka, Sweden. We have Tom Brown (Adam Godley), the polite and slightly gullible detective, and Sophie Borg (Lisa Henni), the loose cannon, whose impulsiveness gets her in trouble more often than not. They clumsily work together, and surprisingly, solve the crime. Season 1 is currently on Netflix – but sad to say, no word yet if there will be a Season 2.

Greg Davies stars in this absurd comedy about Dan, a man-child who stumbles and fails in most areas of his life. His longtime girlfriend dumps him due to a litany of immature behavior, which includes him losing his one pair of work trousers, asking her if she thinks someone could fart themselves into the air, and allowing his mother to still wash his underwear. His stunted development is clearly understood when we are introduced to Dan’s eccentric father (played by flesh-and-blood cartoon character Rik Mayall) whose interactions with Dan are more in line with a terrorizing ten-year-old than a father. Sadly, we only get the talents of Mayall in the first season due to his unexpected death. Thankfully, the show still persisted with a total of four seasons.

You may know the star of the show, Maria Bamford, from her delightfully weird stand-up, where you experience a hurricane of voices, facial contortions, and stories that mix personal vulnerability with bizarre yet poignant metaphors. In Lady Dynamite, Bamford doesn’t do standup—though, she still does many funny voices and facial expressions—instead, she plays a character in a world loosely based on her life. The show jumps back and forth between her life in Duluth, Minnesota and, more recently, her life in Los Angeles as a performer. In both worlds, she is surrounded by cartoonish-like characters, who spend their time bossing around the unassertive Bamford, regularly directing her into many uncomfortable and strange situations. There are two seasons on Netflix, with each season being both uniquely weird and funny.

With Borderline’s mockumentary style, awkward characters, and incompetent boss, it may feel like you are watching The Office’s long lost brother or sister. Unlike The Office, Borderline takes place at a fictional border control at a British airport. Similar to Michael Scott from The Office, there is an inept boss (played by Jackie Clune) who spends more time divulging uncomfortably intimate details about her personal life than doing her job. And then there is the collection of oddly relatable workers at the border control who appear to have picked the wrong line of work—evident in their lack of motivation and inability to properly enforce the airport border control rules. You can find Season 1 and 2 on Netflix.

In the show Cuckoo, we have the perfect comedy duo with Andy Samberg (Cuckoo) and Greg Davies (Ken). Both bring their unique comedy talents to the show—Samberg with his goofy and naive charm and Davies with his over the top indignant reactions. At the start of the show, Ken’s daughter, Rachel (Tamla Kari), meets Cuckoo, a hippy who talks about sky spirits and wolf goddesses, while traveling in Thailand. They fall hopelessly in love and get married in Thailand. Upon Rachel’s return to England, she surprises her parents with her new husband, Cuckoo.

Rachel and Cuckoo move in with Ken, and it doesn’t take long before Cuckoo’s unconventional lifestyle and lack of direction make him an unwelcome guest in Ken’s home. Desperate to get rid of Cuckoo, Ken offers him money to leave his daughter. The plan backfires when Cuckoo, instead, uses the money to buy a potato van from which he will sell jacket potatoes. We only get Samberg’s talents in Season 1 due to him starring in another popular show, Brooklyn Nine-Nine. But don’t worry, the fun doesn’t stop there: three more seasons were made, and they are all on Netflix.

Crazy Ex-Girlfriend takes the stereotypical romantic comedy and spins it into a tale of obsessive love. Rachel Bloom plays Rebecca Bunch—a comedic version of Glenn Close from Fatal Attraction. Rebecca’s obsession is her high school summer camp boyfriend, Josh Chan (Vincent Rodriguez III). Her obsession with Josh prompts a move across the country to be near him. Once in his hometown, she undertakes FBI level stalking, including monitoring him online, befriending his current girlfriend, and “accidentally” running into him on several occasions. All of Rebecca’s scheming will simultaneously make you cringe and laugh. There are three seasons on Netflix with Season 4, the final season, coming to Netflix sometime in the near future.

Any lesser-known Netflix comedies you think we should have included? Let us know in the comments.