Anna and the Apocalypse Deserves More Love This Holiday Season

Give this Christmas romzomcom musical some love this year. 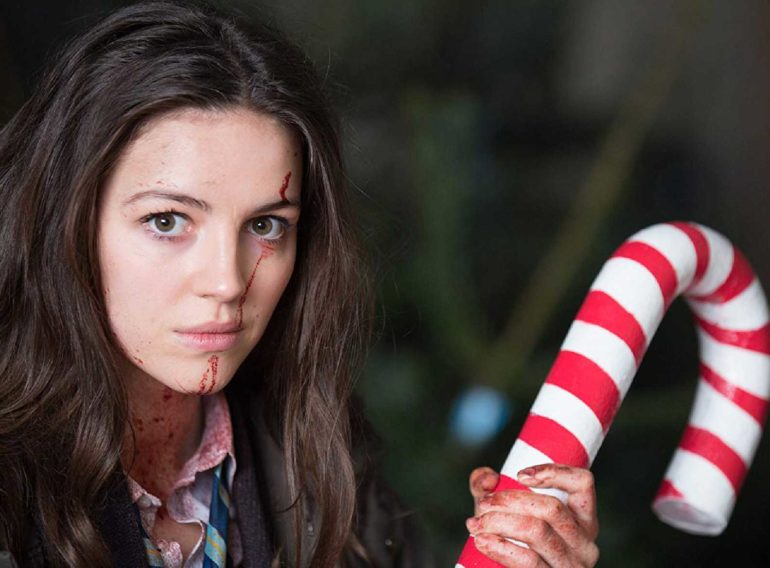 When Christmas time comes, we all have our own traditions. For most, that involves watching holiday movies that’ll get them into the spirit. We have our conventional ones like watching A Christmas Story 24-hour marathon, seeing Kevin McCallister fight off the Wet Bandits in Home Alone, and watching Die Hard because of course, it’s a Christmas movie. For me, though, there’s one movie that I’ll be watching from now on for the holidays: Anna and the Apocalypse, a Christmas-zombie-horror-comedy-drama-musical. While it did receive critical success, it only made $670,430 worldwide at the box office. With a film this unique, everyone needs to experience this crazy good movie.

Directed by John McPhail, Anna and the Apocalypse centers around Anna (Ella Hunt), who wants to travel the world before college and get out of her small town. Her father (Mark Benton) wants her to stay, and to enjoy the holidays. Then one night, the zombie apocalypse happens as the world turns to hell. Anna discovers that her dad is stuck at the school and must rescue him with the help of her friends, John (Malcolm Cummings), Steph (Sarah Swire), and Chris (Christopher Leveaux).

This film is a genre-melting pot as several elements are thrown in at once, especially for such polar opposites with the warm, loving nature of Christmas and the cold existential dread of the end of the world. Add songs to the mix, and this movie should have been a mess. Yet each genre gets to play off each other and doesn’t overcomplicate the film.

The songs are very catchy that they’ll leave you with some pleasant earworms. The structure of the musical is the generic, simplified style of Broadway, which isn’t a bad thing as it doesn’t complicate the movie for the audience. The songs are effective that it’ll explain what the characters are thinking without going overboard and having to spell it out for the audience.

You have Anna, our protagonist, who needs something more out of her life and sings her “I Want” song that explains her desires (“Break Away”). There’s a couple of songs that either describe the characters’ motivations or are there for filler. Then you get the “eleven o’clock” number that’s the big show stopper (“Give Them a Show”) and the finale (“I Will Believe”). Besides moving the story forward, these songs are very catchy and have a friendly, energetic beat to them. The songs are definitely out there as one deals with high schoolers raging war on the undead, and another has the most double entendres I’ve heard in awhile. Also, where else are you going to listen to a rap that explains someone’s love of fish?

While the ensemble is excellent, Ella Hunt as Anna is absolutely fantastic in the role as she gets to play off these different angles. First off, she’s a great singer that conveys many feelings in her performance. She is extraordinarily happy in “Turning my Life Around”, jaded in “Hollywood Ending” and heartbroken in “I Will Believe”. Through her acting, we get to see the full gamut of emotions. Also, she’s one hell of a badass as she slays zombies with a fantastic candy cane staff, and by the end of the movie, Anna feels more like a warrior than a high schooler who wants to leave town.

It might seem strange that Christmas and the end of the world could work together, but Anna and the Apocalypse pull it off with ease because there’s enough poise between the two of them. Holidays heavily involve your loved ones, and thanks to the zombie crisis, everyone is separated from them. It becomes the essential goal of Anna to reconcile with her father, and lovers Chris and Lisa (Mari Siu) to reunite. Besides, there’s plenty of Christmas imagery to be found as the whole town and school is decorated for the holidays — even John is seen with his Christmas sweater.

The zombies are your classic slow-moving undead. They might seem not threatening if it’s just one, but if there’s a group, then they’re downright terrifying. In some cases, Christmas and the undead are combined, like getting a zombified Frosty the Snowman and Santa Claus. At first, it’s pretty funny to see such innocent icons as zombies, but you’ll become petrified as they’re pretty effective jump scares.

There’s plenty of moments of levity that are found throughout the movie, mainly from Malcolm and Chris, who have the right amount of goofiness and likeability. They are the comic relief in the film and deliver some of the funniest lines, guaranteed to have you cracking up. The tone has some similarities to Shaun of the Dead with its comedic approach to horror, but it never feels like a rip-off.

While there’s plenty of fun to be had, when the movie gets serious, you feel it. The movie perfectly capture the feeling of the world actually ending. Gone is your old life, and now you have to survive in this new place that’s trying to kill you. Then the third act happens, and it becomes more of a tragedy. Without giving too much away, the lyric that’s repeated – “there’s no such thing as a Hollywood ending” – acts as a warning.

Anna and the Apocalypse is a great movie that should be enjoyed by horror, musical, and Christmas fans alike. The songs are so catchy that they’ll be stuck in your head for weeks. The characters are likable, and you root for them throughout the film. Particular praise needs to go to Ella Hunt as she gives it her all in this magnificent performance that will hopefully make her a more prominent name in the future. You might have other Christmas movies lined up, but you need to give Anna and the Apocalypse a chance.

READ NEXT: The Best Zombie Movies of the 21st Century