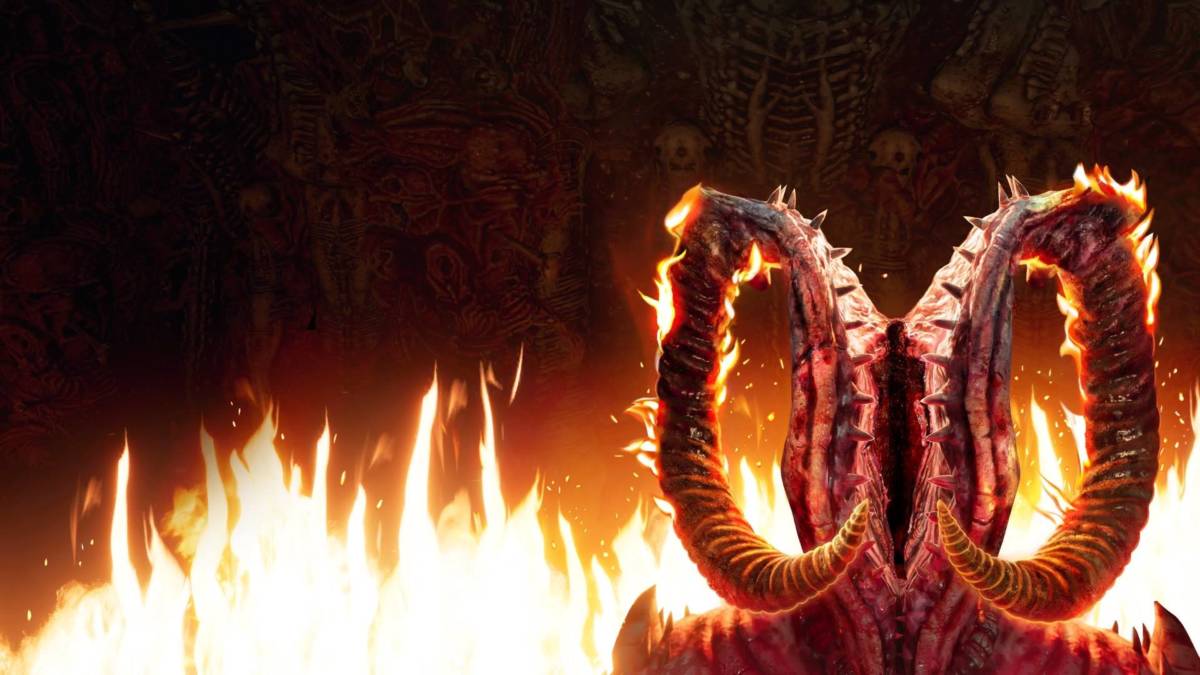 It’s hard to pinpoint just one thing about Agony that makes its name so terribly apt. Whether it’s the laundry list of technical issues or the repetitive and basic gameplay, Agony is a game that continually beats out any of the goodwill it’s built up from a uncompromising setting and some interesting ideas.

You play as an amnesiac hoping to escape from Hell by confronting the mysterious Red Goddess and asking for mercy. With no memories to your name, including who you are, you must trudge through Madmind Studio’s ultra heavy metal vision of Hell — including floors made of limbs and groaning walls — and avoid the demons who’d love to wear your skin as a scarf. The depravities of Agony are captivating early on, laughable and tedious as the game progresses. 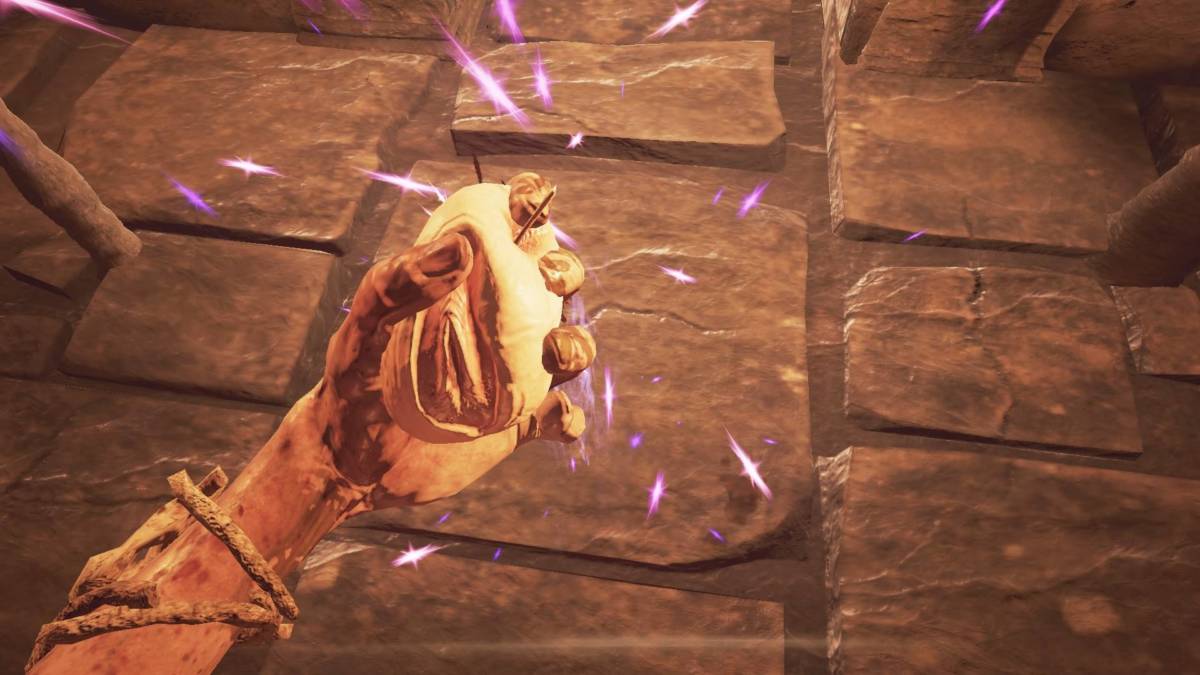 Agony graduated from the Amnesia and Outlast schools of hapless protagonists with a torch being your only real means of defense, though it’s more of a deterrent than a weapon. Stealth is advised with piles of bodies and cracks in the walls being your saviours; if spotted, you can also hold your breath to mask your position from demons. Sometimes this will work like a charm with enemies just walking right past you in plain sight, but sometimes it just doesn’t. Agony is packed with frustrating inconsistencies like this, most notably in its logic.

One of Agony’s saving graces is the ability to transfer to another body upon death, which sees you ethereally floating around the environment until you find a suitable host with a time limit of around fifteen seconds. Early on, the game instructs you to fall off a cliff so you can find a new martyr but then doesn’t allow you to do the same later and just has you restarting from a checkpoint, despite it hinting that it’s the way to make progress. It’s beyond irritating when a game rips up the rulebook it’s only just handed to you. 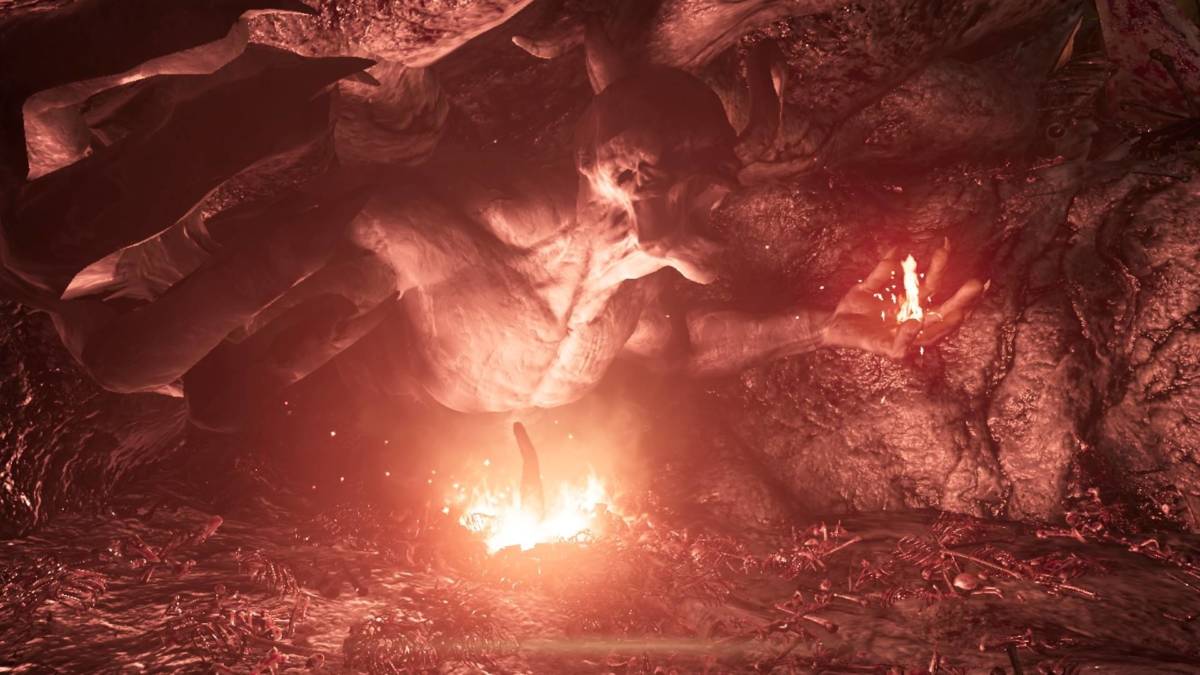 The checkpoints themselves are bizarre, seemingly hidden out of plain sight or not where they logically should be. Failure comes frequently in Agony so having to go through the motions again is a pain, though to Agony’s credit it doesn’t make you redo puzzles or rewatch cutscenes. There’s a lot of trial and error here, so anyone who was annoyed by Outlast 2 will be even more so with Agony thanks to its inconsistent AI and world logic.

Outside of the main loop of staggering around grisly corridors and hoping that the game plays nice, Agony has two ways of spicing things up. The first is to pick up skulls scattered around and deposit them to open up doors, the other is to paint a sigil with your little Gollum fingers. The second is the more inventive of the pair, making you track down a hidden symbol in your surroundings before etching it out, but both come across as padding to stretch out Agony’s simplistic narrative. 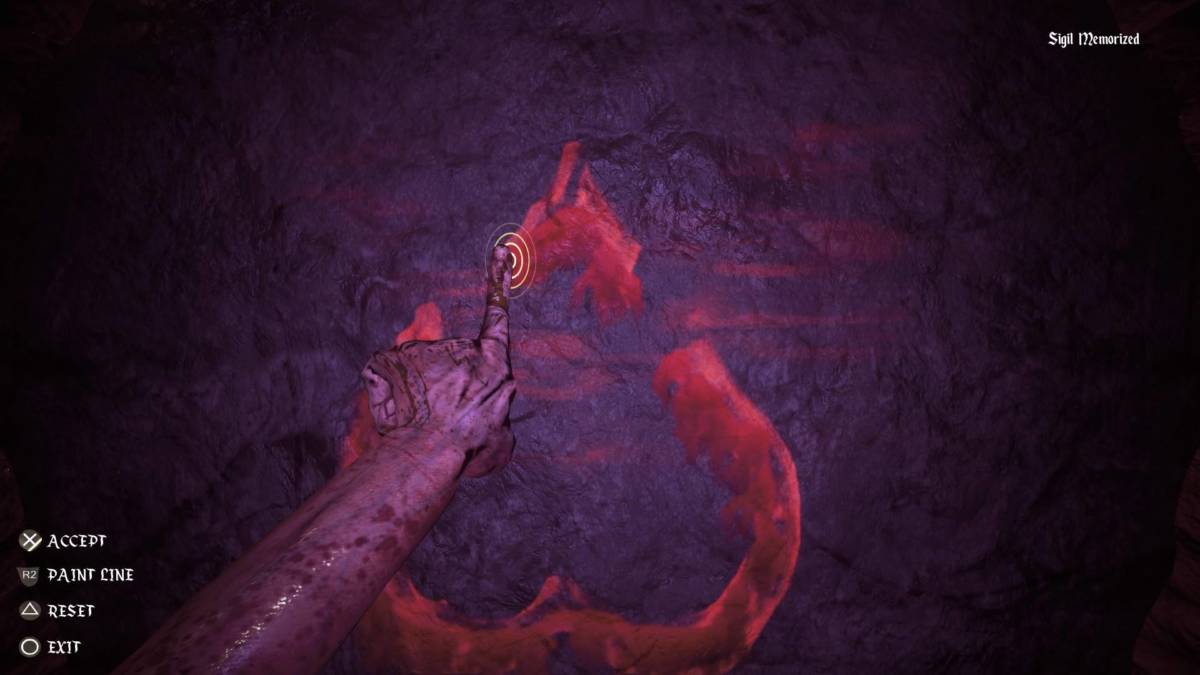 There’s something to be said for a straightforward story, one with a clear goal in mind; the recent God of War being a great example of that. While Agony’s offers twists and turns to its basic premise, there’s no tangible connection to any of it. There’s no real reason to care as the protagonist is silent and supporting characters are also flimsy, not helped by some supremely cheesy writing and poor line delivery. Truthfully, Agony could have been half the length and felt like a leaner and more inviting game rather than a slog falling apart at the seams.

The technical issues found in Agony are galling in their frequency; it’s already been delayed, but clearly not enough. Everything is so undercooked about Agony on PS4, which may be a result of a small team trying to stretch their resources across multiple platforms. That being said, post-launch patches or not, there are no excuses for launching a game in this state. 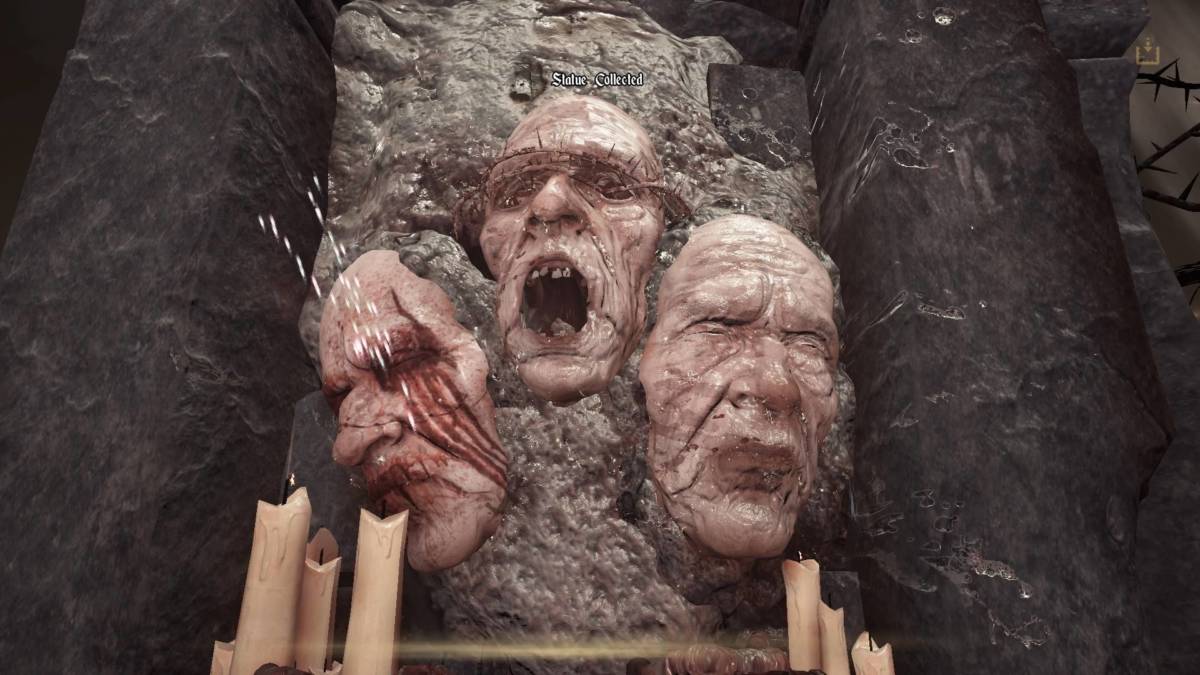 As soon as you wake up in Hell, it’s clear that this isn’t quite the same as the horrifically detailed and polished version seen in the game’s trailers. On a base PS4, textures are flat and don’t seem to have been checked for anti-aliasing; every edge has a strange “crystal” look. From the off, Agony utterly huffs and puffs but cannot stick to a solid framerate, even when you’re doing something as simple as walking around a relatively inactive room. It’s like wading through demonic porridge, which is not as fun as it sounds.

There’s just an overall lack of finesse with everything about Agony, whether it’s the hilariously janky animations of the infamous “booby demons” or random assets floating in the air. Your character will also often become stuck in the environment or just wind up in total darkness when the game fails to properly load the next sequence. Even the eventual ability to possess demons lacks panache with attacks making innocents’ assets fall apart like a more visceral version of Thanos’ click. It’s as big a mess as the rooms of corpses it so regularly dumps you in. 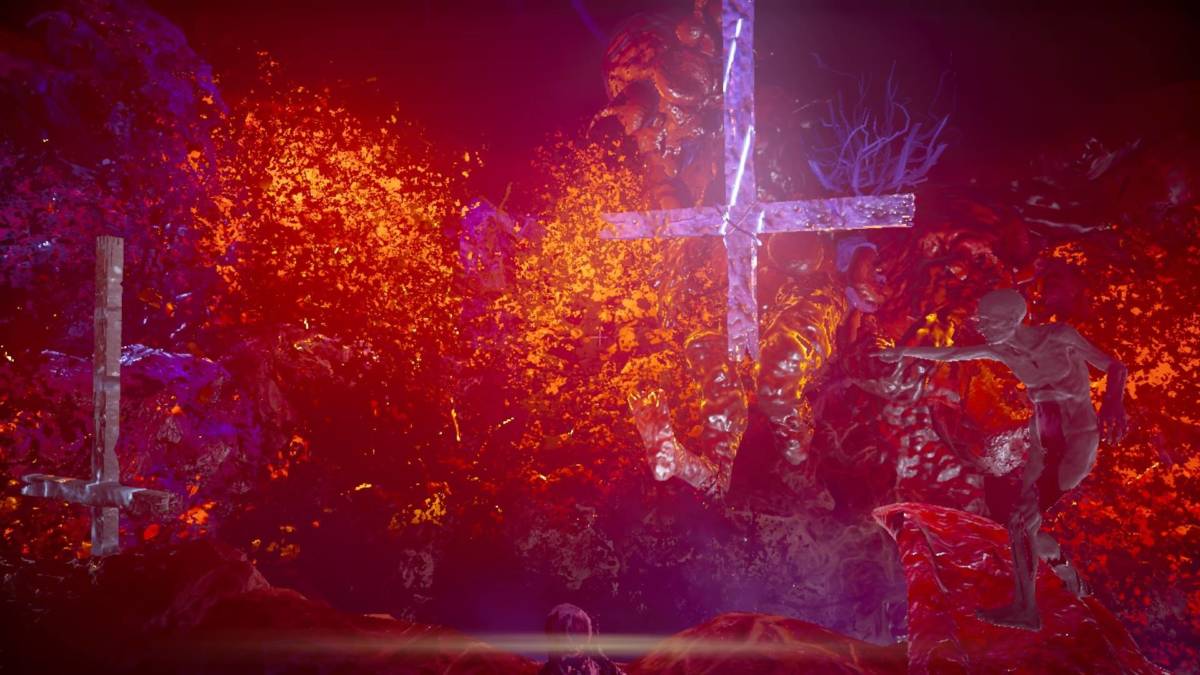 It’s clear what Madmind were going for with Agony: shock and gore. The gore always remains, but the shock, not helped by repetitive and mundane gameplay, wanes quickly. I never thought I would be left so jaded and even bored by smashing demon babies’ heads in, but here we are. Madmind’s concept for Agony was solid, but the execution has been found wanting.

It was always going to be hard for the developers to produce the game to complement the elevator pitch, but with some more time in the oven, Agony could have been a competent survival horror with a USP worth investing time into. As it stands, however, Agony is as hellish as its world and one to be avoided.

Verdict
While it may have some interesting ideas, Agony's awful optimisation, monotonous gameplay, and infuriating trial and error loop make it a sin to play. Microtransactions: none
3