"We scare because we care." 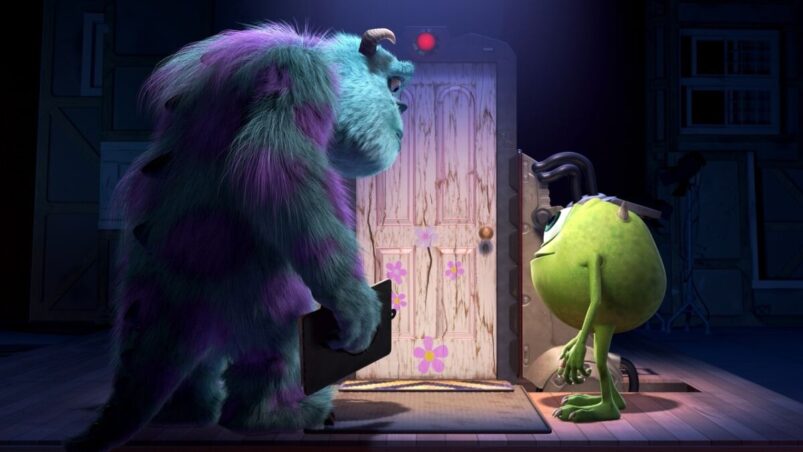 I’m not crazy about my own birthday, but I’m fine with anniversaries for movies. It’s a good way to trace the evolution of the film itself, as it ages against the changing tastes of the world at large. A 15 or 20-year marker for a movie is also a good way to create context around the period itself.

For example, with this month’s Make the Case, I’m choosing 5 movies that were released in November of 2001. That puts all of them at the 20-year mark. By 2001, I was going to movie theaters more than at any other time in my life.

When you’re a teenager, and you live in a rural community where there isn’t a lot going on, you go to the next town over.

There isn’t anything going on there either, but they do at least have a movie theater.

20 years is a long time for a movie in of itself, but also a decent-sized pocket of history and culture. The movies chosen for this edition are going to be reviewed in the present, but I’m also going to try and keep in mind what was going on when they came out in November 2001.

I can’t promise we’re going to learn anything. It may just turn out that everything gets older, and that this can either be a wonder, difficult to accept, or both of those things.

But who doesn’t love a birthday?

That’s not your own.

One more thing: I’m trying not to look back with too much fondness, but it’s hard for me to argue with the opinion that a much more interesting range of films were being released 20 years ago.

As likable and sweetly weird as ever, Amélie still works because it stuck to being as timeless and invested in its characters as possible. The movie is built upon a series of touching and sometimes somber surprises, combined with characters like Amélie, who are written and performed perfectly to the material. It also doesn’t hurt that the film takes audiences on a rather splendid visual tour of Paris.

Its simple story focuses on a young woman (Audrey Tautou, who gives the character considerable charm, freewheeling excitement, and a degree of curiosity which seems to alter her very world) who influences the lives of those around her. The story is one that really just wants to focus on eccentric characters, along with an ever-playful sense of humor which influences the conversations, the motivations of these characters, and movie’s steadfast refusal to do exactly what we want it to.

Amélie is not a complicated film, but its kind-heartedness and beautiful execution of its story and style makes it easy to understand why people still love it.

Monsters Inc. came along at a point where Pixar was firmly established in their golden age. Two monsters being stuck with a young human child, with no way to get her back to her world, was also a showcase for some of the most memorable trademarks of Pixar films. The seemingly endless populace of monster designs, from the simple-but-distinctive looks for main characters Mike and Sully (Billy Crystal and John Goodman as a comedy team I wish we could experience more often), to one of the many noticeable background characters, makes Monsters Inc. rich in its uniqueness.

Yet where the movie, which remains a jewel from one of the most beloved and successful animation studios in the history of the medium, gets its best moments is in its appreciation of its characters. The film is animated beautifully and is also written and directed beautifully with respect to Mike, Sully, and their young charge Boo.

These characters and the performances seem to drive everything else. That can make it easy to forget sometimes that we’re watching a movie with some of the best chemistry, pacing, and attention to detail that had ever been put in an animated film up to this point.

Those qualities are still quite stunning.

3. The Man Who Wasn’t There

There are at least a couple of really good films by the Coen brothers that seemingly no one remembers.

One is A Serious Man.

The other is The Man Who Wasn’t There, starring Billy Bob Thornton in his most restrained and emotionally potent performance. It shares some thematic similarities with A Serious Man, and each presents a portrait of a man who is going to pay for the choices he makes but is ultimately one of the most stylized movies from Ethan and Joel Coen.

The Man Who Wasn’t There is a noir film with an almost maddeningly slow approach to sorrow, loss, and the extremely dark comedy to be mined from thoroughly confused peoples in a thoroughly indifferent-to-its-inherent-chaos universe.

A barber wishes for something more in life and is so restless that he can barely exist for anything except dreams he doesn’t even bother to fully define. Thornton plays this character as a man who refuses to be anything but a witness to life as it passes him by. The comedy comes from how much life insists on his participation regardless.

As is often the case with the Coens, The Man Who Wasn’t There, which might be the driest noir parody ever made, is funny stuff. It just comes at the expense of being reminded that the death of the body and spirit from malnourishment will almost always win the day.

The best comedy films by the Farrelly brothers are built on bad taste with some semblance of a heart. Shallow Hal at the time was their most ambitious attempt at juggling those things. However, while this approach worked for past successes like Kingpin and There’s Something About Mary, it was met with immediate controversy upon the release of Shallow Hal.

As it turned out, not even Jack Black and Gwyneth Paltrow could sell the story of a profoundly shallow man who thinks he’s dating his perception of the perfect woman, only to discover, gasp, she is in fact 300 pounds.

Paltrow in a fat suit was hard to take then, and that certainly hasn’t aged particularly well over the past 20 years. Her discomfort is apparent, and her talent as an actor is not even remotely enough to make us forget that. Jack Black doesn’t fare much better with a character who is perhaps too unlikable even for his abilities. Even as Hal makes the change that we all know he’s going to make, Shallow Hal has gone too hard on its premise for most people to care.

In the present, Shallow Hal is sporadically funny, because there’s just too much talent involved here for that to not happen at all. For me, at least, what still works for me in this film is not enough to suggest it has any greater value than the curiosity you would afford any relic.

5. Harry Potter and the Sorcerer’s Stone

I didn’t really like Harry Potter and the Sorcerer’s Stone (also known as the Philosopher’s Stone outside of India and the US) when I saw it in theaters around December of 2001. Chris Columbus seemed an odd choice for a director, despite a resume which includes Home Alone, another movie about a moppet with super-powers. I was reading and enjoying the books but realized that a fully visual recreation of those stories didn’t work for me for a variety of reasons.

The first in a series of stories of a young boy whose life is changed forever when he learns that he is a wizard didn’t do much for me. I liked Alan Rickman as Snape, and that was really just about it.

As time went on, the films got better, and the actors, who I initially dismissed for being at least annoying, got better with their characters. I hope J.K. Rowling and her pathetic TERF nonsense burn in hell, but if you ask me how I feel about at least the last 3 or 4 Harry Potter movies, I’ll tell you that I think they’re exceptional pieces of entertainment.

Because of that, this first entry, which introduced global audiences to Daniel Radcliffe, Rupert Grint, and Emma Watson (all good actors), has improved at least a little in my own eyes. As a first chapter to a franchise that ultimately got better as it went along (and then went right back to hell with a series of Fantastic Beasts movies that no one wanted), Harry Potter and the Sorcerer’s Stone is tolerable. It certainly at least suggests why Radcliffe, Grint, and Stone are still working regularly.

Still, Harry Potter and the Sorcerer’s Stone doesn’t have noticeable good performances to make it stand out entirely on its own. The various weaknesses of the source material are also consistently apparent in a movie that frequently seems unable to decide between being either boring or hollow.

Hollow isn’t necessarily a bad thing, especially when you can still find meaning and even personalized depth within that, but Sorcerer’s Stone is mostly just boring.