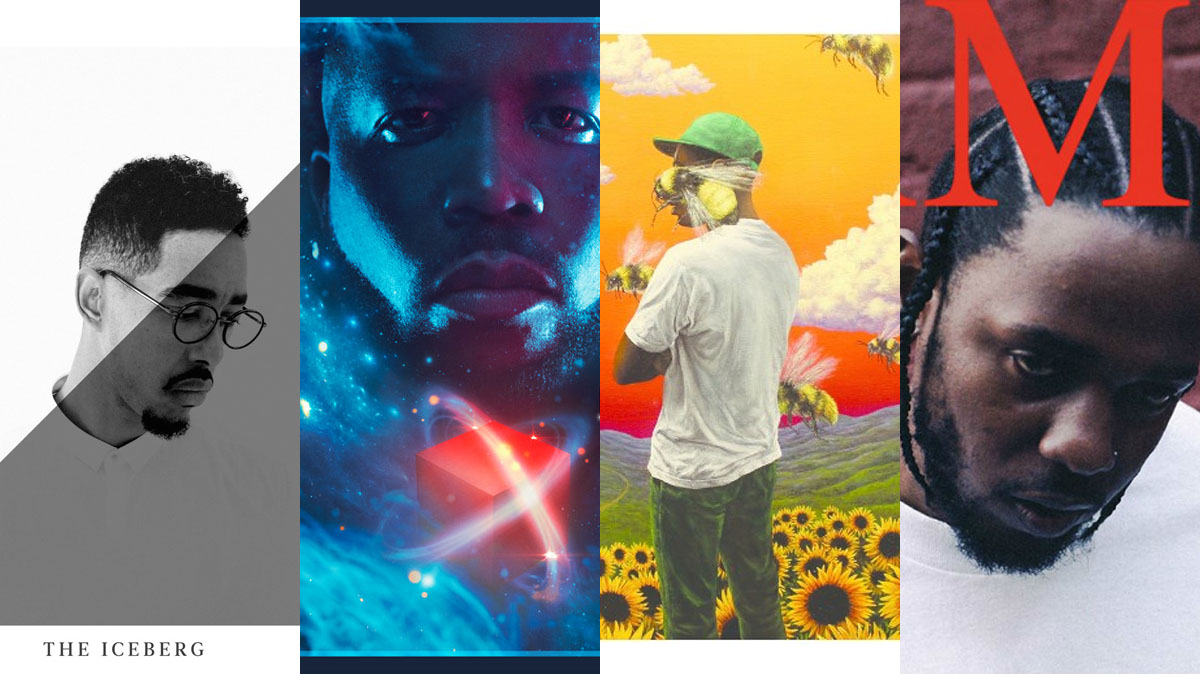 We love our lists and countdowns here at Cultured Vultures, and this time we’re counting down our picks for the twenty best hip-hop albums of 2017. It’s been a busy year for hip-hop, with so many new albums making it difficult to keep up with all the new music, and even harder to narrow down our list to just twenty. With so much music to go through, we’re bound to leave out some dope albums, but it’s all part of the fun of being a hip-hop fan. Let’s get into it.

We almost weren’t sure if this highly anticipated collaboration would happen, but Fabolous & Jadakiss came through in the clutch to deliver a fun project their respective fans can appreciate. With Fab & Jada being staples in the New York hip-hop scene for years, this intriguing collab lets longtime fans finally see them spar verse for verse, while also pushing each other to focus in on themes that go beyond the clever punchlines.

Initially supposed to be titled “Freddy Vs. Jason,” they switched up the theme and diversified the project, taking elements from what they’ve each been known to deliver as solo artists and blending well together on each track. While it might be fair to say sticking to the initial horror theme would’ve made for a more enjoyable project, their approach here allows them to reach a broader audience, which is clearly what they were going for.

Vince Staples’ critically acclaimed sophomore album made waves this summer, with its heavy EDM influence making it stand out from other rap albums. He’s made himself a lot more accessible to mainstream music fans this go-around, filling the album with dance grooves to get people moving.

While the rhymes and bars aren’t always memorable, the overall sound of this album is what makes it great, with Vince’s ability to flow smoothly over the unique production. With sounds that draw comparisons to Yeezus-era Kanye West, Vince Staples carved out his own lane and made the experimentation work well for him here.

Raekwon’s seventh solo album has him moving completely independent of the Wu-Tang Clan, with no guest appearances from his fellow Clansmen and no production from RZA. In fact, the guest features on this album are very limited compared to his previous projects, with Raekwon focused more on just rapping than making catchy street anthems.

Where 2015’s F.I.L.A. had him going for more mainstream appeal, this project sees Rae return to the underground with a sharpened pen game. Even with 25 years of music under his belt, Raekwon is still finding new ways to innovate with his lyricism, as the appropriately titled The Wild has him letting loose and just enjoying the art of emceeing.

The debut album of one of Roc Nation’s newest signees is exactly the blend of raw talent and mainstream appeal that you’d expect of the brand. Vic Mensa showcases his songwriting abilities as he tells the tale of some of the hardships he’s had to overcome to get to where he is today.

His songs touch on relationships, mental health, and the impact gang violence and poverty has on the youth in his hometown Chicago, before ending the album with a more hopeful message of unity. His rapping and singing show clear influences from all-time greats like Kanye West, Eminem, and Jay-Z, which makes for a very enjoyable album from an artist who’s clearly dedicated to the craft.

A veteran of the Washington D.C. hip-hop scene, Oddisee continues to evolve as both an emcee and producer. The Iceberg has Oddisee delivering some catchy hooks and groovy beats, but there’s a lot to be discovered when you dig deep and really tune in to the lyricism. This album has a way of opening your mind up to social issues while making you dance at the same time, with a good balance between the serious tracks and the fun grooves.

The way Oddisee produced this album is what makes it stand out, as he designed it to be performed with live instruments, and the songs sound even better when you catch him and his band Good Compny performing on tour (or on the live album Beneath The Surface).

There’s no other album on this entire countdown that sounds like DJ Format & Abdominal’s Still Hungry. Even the duo’s name gives you a hint to their sound, as they take it back to that late 1980’s/early 1990’s era where emcee & DJ duos were at the forefront of hip-hop. The album is filled with raw rap music that will instantly remind you of golden age duos like Eric B & Rakim, Kool G Rap & DJ Polo, and DJ Jazzy Jeff & The Fresh Prince, to name a few.

DJ Format chops up the party records while Abdominal delivers sharp rhymes with substance, keeping things interesting over the near 40-minute album. This UK-Canada team up makes for a beautiful, fun-filled tribute to the golden age of hip-hop.

After collaborating on two songs for Apathy’s Handshakes With Snakes album last year, Ap & O.C. have teamed up for an entire album together, and it’s pretty much exactly what you’d expect from them. The two underground heavyweights have been serving up battle-styled, punchline-filled verses for years, and they do exactly that on every track here.

They keep the formula simple with dope beats and dope rhymes, and they’re able to keep each other on their toes with the level of competition they each bring to the table. Both having underdog careers, you can hear the drive Apathy & O.C. have to slay every verse they spit.

It’s been a breakout year for Logic, as his third major-label album has led to new accolades, including chart-topping sales, high-profile award show appearances, and most recently his first Grammy award nominations. It’s his most socially conscious project yet, as the narrative of the album ties together themes of religion, racial identity, and mental health.

Loosely connecting the plotline and expanding on the macro perspective he established on his previous album, The Incredible True Story, Logic uses this album to explore human existence while tying things back to current events. He’s progressively finding his own lane in the pop-rap world and continues to evolve with every project.

Earning his first Grammy nominations for one of his own albums, Tyler, The Creator’s fifth solo release is his most cohesive, focused and mature project yet. While he was once known for being overly profane for shock value, the album originally titled Scum Fuck Flower Boy sees the antics thrown out the window as he becomes brutally honest and transparent. Tyler’s production also continues to evolve, as he uses heavily layered instrumentation to masterfully take you through these mellow moods, and lowers the noise so you can really hear him.

As the listener dives deep into his state of mind, they hear a young man who struggles to find happiness amongst his astronomical success, filling voids with materialistic indulgences and hiding how he truly feels to maintain a reputation. While day-one fans may miss the angry Tyler, they have to appreciate the way he sat down and opened up to them here.

¡Mayday!’s fifth full-length release on Strange Music sees them continuing to stand out from all the other artists on the label. With their awesome ability to blend between rap, rock and pop sounds, the Miami band takes listeners on yet another wild ride of emotions, moving seamlessly from groovy party vibes to moody, therapeutic tracks.

Search Party is less political than their previous work and more introspective, but the songwriting abilities of Bernz & Wrekonize ensure they connect just as well to the listener, remaining both catchy and relatable. Wrekonize continues to impress with his ability to both sing and spit rapid-fire, sharply-written raps, and Bernz continues to elevate his rhymes and flows throughout the album. It’s a solid addition to one of underground hip-hop’s best discographies to debut in this decade.