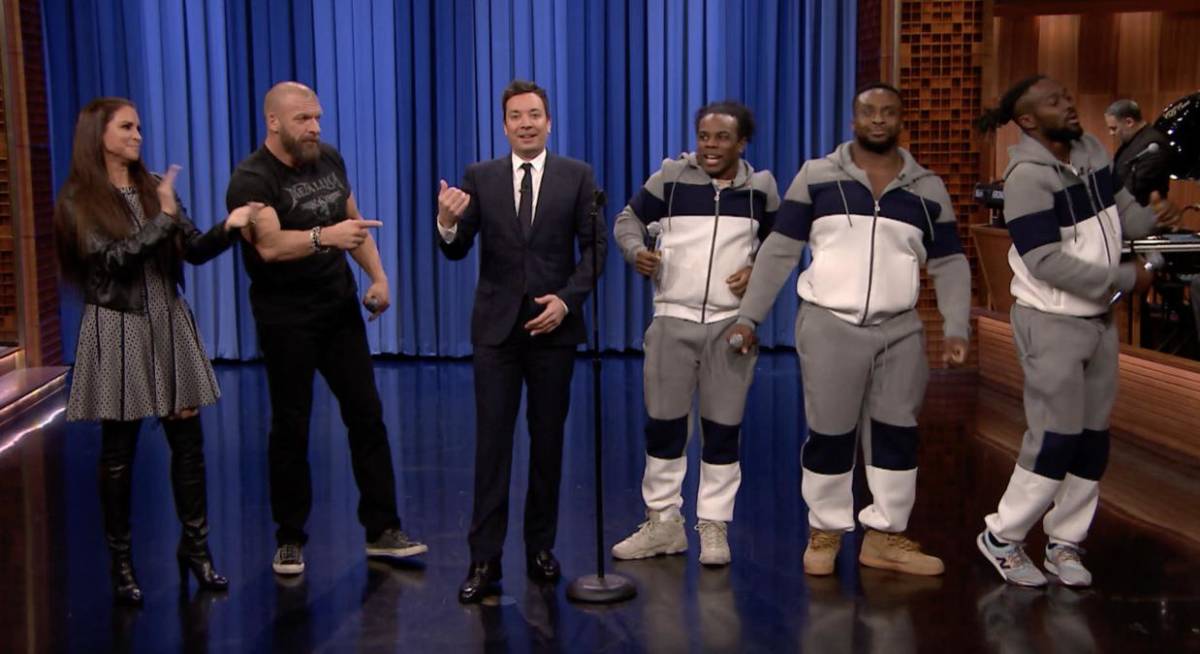 For those who might have missed the one or two promotional videos mentioning it, Raw is celebrating its 25th anniversary this coming Monday night. To spread the word of this historic show, WWE power couple Triple H and Stephanie McMahon appeared on The Tonight Show with Jimmy Fallon, alongside SmackDown faction The New Day for a tag-team lip sync battle. Hilarity ensued.

The Lip Sync Randomizer first picked the song for the tandem of Fallon and The New Day to mime. The trio of Big E, Kofi Kingston, and Xavier Woods had nominated Motownphilly by Boyz II Men, while The Tonight Show host had chosen Phil Collins’ Billy Don’t Lose My Number. The New Day’s pick was chosen and the world was treated to a little East Coast swing.

Next up was Triple H and Stephanie. The battle was initially for mere bragging rights, but the power couple upped the ante just before the competition began by stipulating that if they won, Jimmy Fallon had to appear on Raw, live at the Barclay’s Centre on Monday night. It was time to play the game.

Triple H’s pick was Seek & Destroy from Metallica’s debut album, Kill ‘Em All. “The Game” was excited, wearing his Metallica t-shirt and everything. However, he hadn’t considered the nature of the Lip Sync Randomizer. He hadn’t counted on the fact that Stephanie would also have chosen a song. That song was How Far I’ll Go, from the Moana soundtrack. Guess what the Randomizer in all its random gloriousness chose?

Triple H went into a sulk, throwing his jacket to the ground and slinking off to the sidelines where an amused New Day stood smirking. Stephanie wasn’t phased, displaying some sick syncing skillz. While miming the first verse as if she were singing the Disney tune herself, Stephanie dragged her moping husband back onto the stage. With his muscles stretching the sleeves of his t-shirt like the Incredible Sulk that he was, he bashfully turned away from the camera and the studio audience that was out for blood.

But then, as the key changed, and the more up-tempo chorus kicked in, something incredible happened. A sight that needed to be seen to be believed! “The Game”, “The Cerebral Assassin”, Triple H lip synced like his life depended on it, nailing the mouth-movements from each lyric. He knew the words to the shock of the world looking on. It should come as no surprise though; not only do Triple H and Stephanie have three daughters who may well be Moana fans, but that particular Disney flick also stars Hunter’s former foe and current bro, The Rock.