The Jurassic Games (2018) REVIEW – Well This Is A Surprise 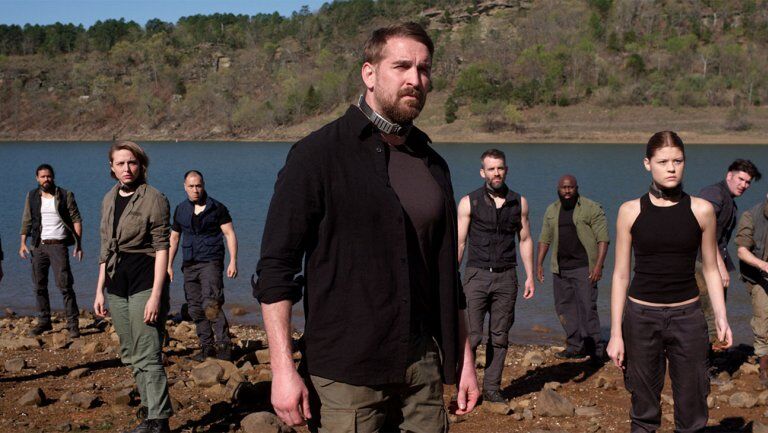 If you’ve ever watched The Hunger Games and thought ‘you know what this is missing? Dinosaurs!’ then friends, this is the movie for you.

The Jurassic Games offers us a vision of a dystopian future where death row prisoners are pitted against voracious dinosaurs and each other in a fight for survival. It’s a virtual reality Colosseum, televised and enjoyed all over the country. The winner gets their freedom, while the losers get a lethal injection. Who will survive and who will be dinosaur chow?

Our protagonist is Anthony Tucker, played ably by Adam Hampton. A father of two, he is convicted of his wife’s murder and sentenced to death despite his protestations of innocence. He volunteers for the Games for the same reason the other convicts do – a shot at freedom, to get back to his family. Can he survive the vicious killers and bloodthirsty dinosaurs? Or will his sentence be carried out after all?

Let’s be honest – the outcome is pretty predictable. But the road there is a hell of a lot of fun, and there are several moments that make you genuinely doubt whether the filmmakers will go the expected route after all. Hampton does a good job portraying the slightly-tough everyman as a reluctant action hero – this is no Arnie movie where a supposedly mild-mannered character is suddenly bending bars and spitting bullets.

Most of the cast do a decent job with what they’re given. The Mason Brothers are standouts, with Luke Wyckoff’s Albert having a great time chewing the scenery. Ryan Merriman as the game’s host and Perrey Reeves as his boss Savannah do well, but the characters are kind of one-note caricatures who are mostly there to press home how evil and unethical the game is. I would have liked to see some more showboating from the host in particular, as he wasn’t quite as theatrical as he should have been to front a show this dramatic. Of the cast, the weakest is probably Katie Burgess as Joy, who simply doesn’t come across as the psychotic killer as written. She just seems to be in a bad mood. I found it easier to believe in Cate Jones’ Stephanie as a killer; she was wide-eyed and seemingly naive one moment, then cold and brutal the next. It would have been interesting to see the actors in each other’s roles.

Having said that, the main draw in a film like The Jurassic Games is usually not the cast. The audience is after a spectacle, a monster mash. The visual effects can make or break a film like this, and for the most part they’re really good. All the overlays and graphics for the TV segments and the holographic table were superb and really sold the premise and the setting. When we in the control room, it definitely felt like a high tech control room akin to Jurassic World’s (perhaps made of the equipment left over when InGen bought the best stuff). And it’s nice to see the little cambots flying around, they were a nice touch. Oh, and the blood effects from the wounds were nice too.

And the dinosaurs? Well, I mean, you’ve seen the trailer. I was genuinely impressed a few times as I was expecting something more on the level of The Asylum. Or, heaven forbid, Birdemic. At no point did I feel like the dinosaurs were right there with the actors, but let’s be honest again: even in a big smash-hit mega-budget blockbuster you get moments where the CGI isn’t right and it throws you out of the movie. The CGI here, while much cheaper, isn’t far below the quality of the dinosaurs in Peter Jackson’s King Kong, or the monkeys in Indiana Jones and the Crystal Skull. There are duds, sure (that triceratops! The pterodactyl flying away with someone! The bugs, oh god the bugs!) but that’s part of the charm of a movie like this. I’d love to know what their budget was, because I bet they made it work damned hard and it’s mostly paid off. The dinos are a little clunky, but they could have been far worse. There’s also an in-universe reasoning behind it, though – they’re not real dinosaurs. They’re VR constructs, so of course they’re slightly off and don’t quite look all-there. Hey, at least the holographic table these guys have makes sense to have. I’m looking at you, Hunger Games.

I’m a firm believer in the need for a movie to entertain its audience. A Darren Aronofsky movie will obvious be radically different to a Roger Corman movie, but the aim is the same: to entertain. That’s why they call it the entertainment industry. That’s all I ask from a film: entertainment. And The Jurassic Games has it in spades.

Is it original or groundbreaking? No. It’s the Hunger Games with dinosaurs, it knows what it’s promising and that’s what it delivers. Is it boring? Also no. The pace slows down occasionally but never without cause, and cutting to the B-story of the presenter-with-a-conscience works really well in its favour. It also has a fake advert for a toy line based on the show, and I’m an absolute sucker for fake ads in movies. And that final shot is absolutely hilarious and had me giggling like mad.

It’s more Sharknado than Jaws, but that’s not a bad thing. If you love silly films that you don’t need to think about too much, you could definitely do much worse than catching The Jurassic Games.

Any film where a camera operator is directed to ‘stay on the cannibal’ is ok in my book.

Verdict
The Jurassic Games doesn't take its smash-up concept too seriously, which ultimately works in its favour. While not original or ground-breaking, it's a lot of fun and worth catching. Review screener provided
7.5
Cultured Vultures is a pop culture website established in 2013 covering all things gaming, movies, and more. We eat your words.
All The News On The Biggest Games