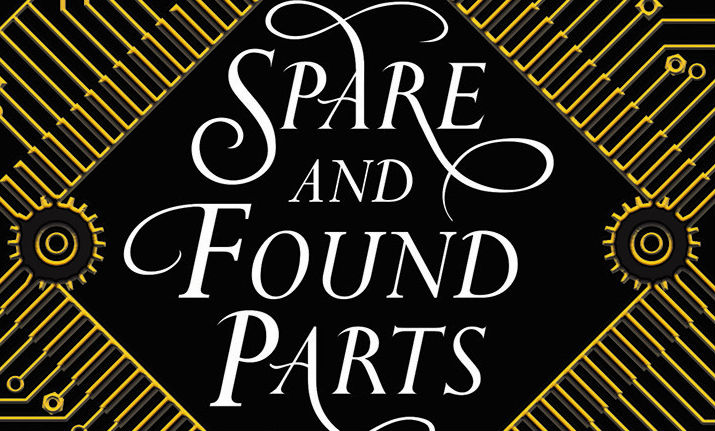 Nell Crane lives in Blackwater City, a place devastated by an epidemic many years ago. Almost everyone in the city is missing parts. Nell’s father is the scientist who has created the mechanical limbs that everybody wears now. He’s also the one who designed the clock that ticks in the place of Nell’s heart – marking her as an outsider forever.

Everybody in the city must make a contribution towards its rebuilding. And Nell’s time to contribute is fast approaching. When she finds a mannequin hand in the river, Nell decides she wants to use it to build herself a companion. But her idea might lead her down a path full of secrets she could have never expected.

When I first picked up Spare and Found Parts

, I had certain expectations about what it would be about, and where it would lead. But I quickly found every single one of these expectations shattered in the best way possible. It’s a novel that is filled with surprises.

The setting of Blackwater city was one of my favourite parts of the book. As a re-imagining of Dublin, it’s both familiar and unfamiliar, and cleverly constructed into a new world that is living in the aftermath of a technological disaster. It’s very easy to get lost into this world that is so vastly different from ours.

The protagonist, Nell Crane, is as surprising as the plot. She starts off as a quiet, meek girl who feels like the outsider. And as the novel progresses, she grows in ways that I couldn’t have imagined. Though there are many things that Nell is insecure about during the novel, such as the clock inside of her and living up to her parents’ crowning contributions to the city, she is never a weak person. That is to say, despite her quietness, Nell stands by her convictions with a certain strength and diligence, which is not something you see often in female characters in literature.

Sarah Maria Griffin’s prose is something else altogether. It manages to find a perfect balance between lyrical and to the point. Which means that as you get lost in the beautiful writing, you can simultaneously become lost in the plot, characters, and world.

Verdict
A beautifully written novel that is full of surprises.
9.5
Cultured Vultures is a pop culture website established in 2013 covering all things gaming, movies, and more. We eat your words.
All The News On The Biggest Games