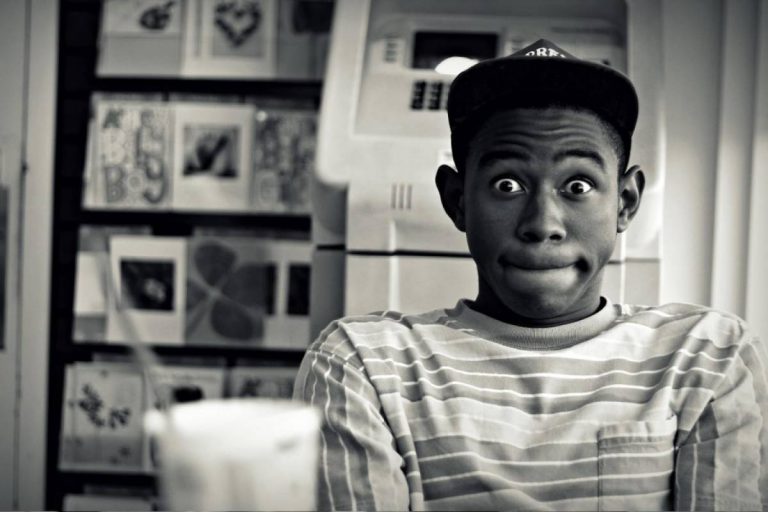 “How many leaders in the house?  Well can somebody bring the mirrors out?  I’m getting lonely…” – Buffalo

Tyler, The Creator has always been one to go against the grain, with his trigger-happy use of both F-words, and the vivid narratives on his albums putting listeners in uncomfortable situations.  He had gone relatively quiet on the music front before announcing the release of this Cherry Bomb album a week before it dropped.  After the connected plotlines on his first three albums, Bastard (2010), Goblin (2011), and Wolf (2013), there was no telling which direction he’d go with his next album.  Once you press play, you’ll realize this is nothing like his previous releases.

Cherry Bomb is not a dope hip-hop album in the traditional sense.  Tyler is not rapping his ass off here (although he was never a super-lyrical rapper, he always focused more on following his albums’ plotlines).  The reason I say this is because Tyler is expanding far beyond Hip-Hop on this album, as he blends sounds from Neo-Soul, RnB, Punk, Rock and EDM.  While he does rap on most songs, there’s much more emphasis on his growth as a producer; as he produced this entire album himself and you can tell he’s been studying the works of Pharrell Williams and Kanye West.  This emphasis is obvious from the first track, as the mixing intentionally drowns out Tyler’s vocals with the instrumentation for about half of the album.  The vocals are also more like melodic singing compared to his previous releases, and absolutely no guest appearances from any of his fellow Odd Future members can be found here.

The album starts off with the energetic, rebellious ‘Death Camp’, of which we got a snippet in the music video Tyler used to announce this album.  The guitar riffs and Tyler’s vocal delivery on this track draw comparisons to Pharrell during his N.E.R.D. days.  The way the mixing was done here, you really need to blast this at a loud volume (the way rock music should be played) to actually hear what Tyler’s saying over the noisy guitars.  After the badass introduction, Tyler seems to realize his influence on ‘Buffalo’, as a narrator can be heard saying “there are so many kids right now, listening to this guy”, and he spends the next few songs rapping about being a leader and reaching your potential.

Tyler has been known to use various effects on his vocals in the past, but he gets really experimental on this album, sometimes distorting his voice, making it harder to tell what he’s saying, and sometimes raising his pitch (as opposed to the deeper voice we’ve heard on past albums).  After rapping on the first four songs, things get different as Tyler sings duets with an uncredited female singer on songs like ‘Find Your Wings’ and ‘Blow My Load’, the former an inspirational track and the latter a very sexual one.  Between these songs is the most awkward track on the album, ‘Cherry Bomb’.  The mixing on the album was off on most of the songs up to this point, but this one has the bass almost completely drowning out Tyler’s vocals, as he yells in the background.  It sounds like you’re at a multi-stage music festival and you’re standing too far away to hear what Tyler’s yelling, but close enough to hear the blaring bass.

The second half of the album sees Tyler focused more on girls than motivating his young fan base, as the next few songs mellow out and Tyler is able to rap more calm and clear.  ‘2Seater’ sees Tyler move seamlessly between singing and rapping, with some of his clearest vocals and best lyrics on the album, before Schoolboy Q makes a guest appearance on the ridiculously titled ‘The Brown Stains of Darkeese Latifah Part 6-12 (Remix)’.  This track may be the most Hip-Hop track on the album, as Tyler and Schoolboy Q flow smoothly over the bouncy beat, but the biggest Hip-Hop collaboration of Tyler’s career to date comes on ‘Smuckers’, which features Kanye West & Lil’ Wayne.  This track is another highlight, as Tyler goes back to his rapping roots, Kanye spits a verse that’s typical of his style, and Weezy really shines.  I’m not the biggest Lil’ Wayne fan, but even I have to admit he grew his balls back and spit some of the best rhymes I’ve heard from him in years.

Between these two highlights for Hip-Hop fans is another long duet, the lead single ‘Fucking Young/Perfect’.  This song kind of reminds me of Shaggy’s ‘It Wasn’t Me‘, with the way it’s so catchy yet the content is so wrong (to a higher extent with Tyler).  Despite there being only one mediocre rap verse, it’s cool to see Tyler develop an ear for good melodies, as he completely alters the pitch in his voice to a point where he’s unrecognizable when he’s singing.  The vocal effects remain on the final two songs, as Tyler both raps and sings at a pitch he could never reach with his natural voice.  This, combined with the eerie production effectively gives the end of the album a psychedelic vibe.

Overall, this album is going to throw off Hip-Hop fans due to the emphasis on everything but rap, but I can see Tyler’s core fan base sticking with him as he goes through his experimental phases.  He has definitely improved as a producer, seeing the big picture and developing an ear for different sounds.  There are a handful of songs that will appeal to Hip-Hop fans, but the majority of this album’s appeal is in its overall sound and atmosphere.  Unfortunately, this is also where the album falters, as the experimental mixing makes some of these songs hard to listen to multiple times.  None of Tyler’s albums have been “perfect”, as he always has different songs appealing to different types of fans, and this is especially true with Cherry Bomb.